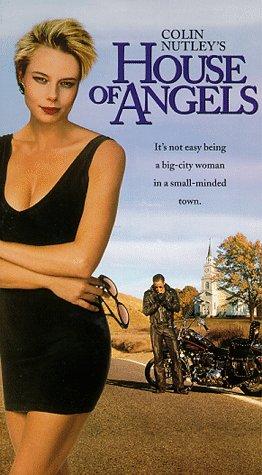 In HOUSE OF ANGELS, an artist named Fanny, who lives on the fringes of conventional society, inherits a large estate left to her by a grandfather she never knew. As she attempts to settle in her new home, she and her boyfriend, Zac, are greeted with open hostility. The local minister intercedes, however, and teaches the community a lesson about tolerance.

Colin Nutley’s HOUSE OF ANGELS is a compelling comedy/drama about two misfits, Fanny and her longtime live-in boyfriend, Zac, who suddenly strike it rich when Fanny inherits a huge estate in a small Swedish town from a grandfather she never knew. Fanny and Zac turn heads when they show up in town on a Harley-Davidson “74” and wearing leathers to collect the inheritance. Upsetting the plans of a local man who planned on buying the property, Fanny decides to settle down in the town, even though the townspeople do not take to her and Zac with their strange dress and hedonistic sexual habits. However, when the townspeople, who are guilty themselves of adultery and pornography, attempt to burn Fanny and Zac’s home, the local minister steps in and teaches them a lesson on hypocrisy and tolerance.

HOUSE OF ANGELS successfully focuses on the twin themes of hypocrisy and tolerance. Director Colin Nutley is to be commended for his positive ministerial portrayal since it is rare for a film to show the clergy in a positive light. In spite of its appeal, the film is marred by its excessive length of 119 minutes, which could have been trimmed down for effectiveness, and by the full-length male and female frontal nudity, which will offend most viewers.