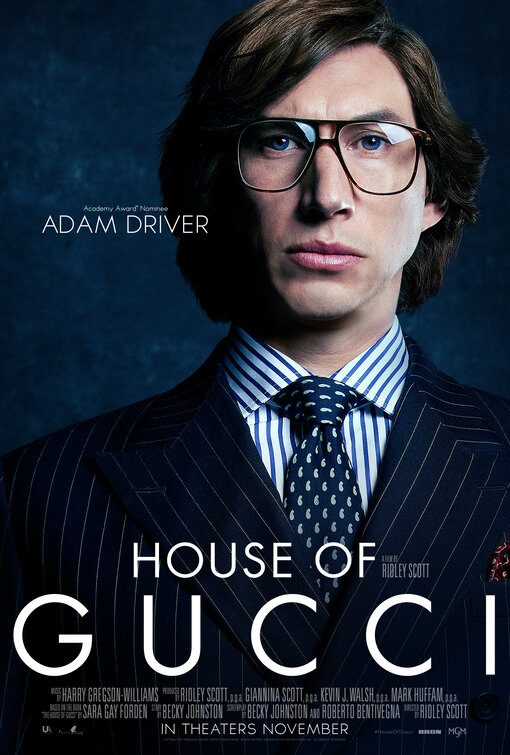 HOUSE OF GUCCI is a drama about the Italian family behind the fashion icon. The movie focuses on the marriage of one grandson, Maurizio, to an ambitious woman, and how it started a chain of events leading to the family’s downfall. Against his father’s wishes, Maurizio marries Patrizia, the daughter of a man who runs a successful transportation business. Maurizio’s uncle, Aldo, takes a liking to Patrizia. He tempts Maurizio to come work for him in New York. At his wife’s urging, Maurizio convinces Aldo’s disgruntled middle-aged son to rebel against his father’s control.

HOUSE OF GUCCI is a sad, cautionary tale, with some lighter funny moments to temper the drama. Well-directed and acted, the movie shows how a famous family destroyed itself through ambition, greed and pride. These sins lead to deceit, betrayal, financial disaster, and, eventually, murder. The movie is marred by an anti-capitalist subtext, revisionist history and slander that leave out some important facts. HOUSE OF GUCCI also contains about 25 “f” words, a depicted sex scene and other immoral behavior. An assassination scene also occurs toward the end of the movie.

(H, B, C, LLL, VV, SS, N, A, D, M)
Dominant Worldview and Other Worldview Content/Elements:
Light cautionary tale with a humanist worldview shows how ambition, greed, pride, and perhaps jealousy can destroy a family
Foul Language:
About 32 obscenities (abut 25 “f” words), three light profanities, and man urinates on a Gucci scarf that his uncle’s proud of designing, plus some Christian references, but the characters’ religious faith
Violence:
Man is assassinated in a strong violent scene, and husband shoves wife against a closet door and holds her angrily when they have an argument that turns vicious (the wife clearly goes too far in ridiculing the husband’s manhood, and that’s pretty much the end of their relationship and marriage)
Sex:
Depicted oral sex and fornication with clothes in one scene before marriage, implied oral sex between a married couple while the man is driving, man decides to reject his wife and have an affair when she goes too far in a heated verbal argument, and middle-aged man complains to his father that his wife won’t have relations with him after the father’s nephew and the nephew’s wife embarrasses the middle-aged man’s wife during a fashion show even the son organized
Nudity:
Upper and rear male nudity at a Tom Ford, Gucci fashion show when a male model wears an open shirt, takes off the shirt and, when he turns around, his pants show his bare bottom in what looks like a thong
Alcohol Use:
Alcohol use
Smoking and/or Drug Use and Abuse:
Smoking but no drugs; and,
Miscellaneous Immorality:
Strong miscellaneous immorality also leads to tragedy and includes betrayals, deceit, man gets back at his father by exposing him for tax evasion but doesn’t realize that his actions will send his father to prison for a year, marital discord, jealousy, uncontrollable anger, man is rude to his only son’s girlfriend, father calls his son an idiot but says, “He’s MY idiot,” two men hire an assassin to murder one woman’s ex-husband, another father is a snob.

HOUSE OF GUCCI is a drama showing how the Italian family behind the fashion icon destroyed themselves though ambition, greed and pride and lost control of their company. Well-directed and acted, HOUSE OF GUCCI is a sad, cautionary tale, with some lighter funny moments to temper the drama, but it contains many “f” words, an anti-capitalist subtext and some revisionist history and probable slander.

The House of Gucci company was founded by Guccio Gucci in 1921 as a small family-owned leather shop in Florence. However, the movie focuses on the story behind one of Gucci’s grandsons, Maurizio, and his marriage to the ambitious daughter of a trucking company, a dark-haired beauty, which led to the events that hastened the family’s destruction and loss of its empire.

The movie opens in 1995, two years after Maurizio sold his remaining shares in Gucci, which ended his family’s association with the brand. Maurizio rides his bicycle to work one morning. Just as he’s about to climb the stairs outside his office building, he hears a man’s voice call his name, and he turns around.

Cut to 1978 as young Patrizia Reggiani walks through a phalanx of truck drivers and mechanics to her father’s one-story office trailer to work. She clearly enjoys the catcalls and whistles from the men. That night, Patrizia attends a party at the home of some wealthy person. There, she

meets Maurizio, who’s attending law school, and enjoys flirting with him by the bar and on the makeshift dance floor.

Soon, Maurizio and Patrizia are dating, and Maurizio takes her to meet his father, Roberto, a former actor who owns 50% of Gucci with his brother, Aldo. A snob, Roberto thinks Patrizia is just a golddigger, but Maurizio tells his father he’s going to marry her whether he likes it or not. They get married, and Maurizio starts working for Patrizia’s father.

Maurizio’s uncle, Aldo, returns to Italy from running the famous Gucci store in New York City. Under Aldo’s business acumen, the company has opened thriving stores all over the world, from New York to London to Tokyo. Aldo takes a liking to Maurizio’s new wife, and it’s clear he already likes Maurizio. In contrast to this, he thinks his oldest son, Paolo, is an idiot who has no fashion sense. Paolo, however, fancies himself a good designer and is angry that neither Aldo, nor his uncle, Roberto, will let him design anything for the company.

Aldo wants Maurizio to work for him in New York City. Patrizia’s ambition and greed for power and luxury eggs Maurizio to take the job. Then, also at his wife’s urging, Maurizio convinces Aldo’s disgruntled middle-aged son, Paolo, to rebel against his father’s control. This leads to further estrangement between Aldo and his son. That’s only the beginning of the family’s destruction, including the eventual end of Maurizio and Patrizia’s marriage.

HOUSE OF GUCCI is a sad, cautionary tale, with some lighter funny moments to temper the drama. Well-directed and acted, the movie shows how Patrizia’s greed and ambition sparked her husband, Maurizio Gucci’s, own greed and ambition. That, in turn, leads to a further estrangement between his uncle, Aldo, and Aldo’s son, Paolo. Betrayal occurs, leading to financial disaster, murder and prison terms for several people.

Sadly, however, HOUSE OF GUCCI is only “inspired” by the unhappy situations and events that destroyed the Gucci family. It leaves out some important facts, makes a couple major changes in the timeline of events and could be accused of slandering the family, especially in its portrayal of Aldo’s son Paolo. For example, Maurizio actually met his wife in 1970, and started working at the New York store in 1972. Also, Aldo Gucci had more than just the one son. Most peculiarly, the movie doesn’t mention the fact that Paolo actually was Gucci’s chief designer in the 1960s. In fact, he helped Aldo design the company’s famous Double G logo that first attracted the world’s eye in 1954 movie starring Ingrid Bergman and directed by her second husband, an Italian director, when Bergman carried a Gucci nag and umbrella. The movie’s portrayal of Paolo therefore seems slanderous and excessive. Also, in real life, he and his father were taller and better dressers than depicted here.

In addition, there appears to be an anti-capitalist subtext in HOUSE OF GUCCI. For example, the movie makes a strong point of noting that Gucci only caters to the rich and wealthy, including rich celebrities. The movie suggests that this is too materialistic and immoral. It also shows that Aldo and his brother, Roberto, made tons of money from this ritzy business. However, the movie fails to note that Aldo was also known for his philanthropy and received an honorary degree from the City University of New York for it. It’s not immoral to make lots of money by only catering to really wealthy people if you employ a lot of people and share your own riches for doing that with your family and with other, less fortunate, people and causes,

especially if you include support for spreading the Gospel of Jesus Christ as a major part of that charity.

HOUSE OF GUCCI also contains about 25 “f” words, a depicted sex scene and other immoral behavior. An assassination scene featuring a handgun occurs toward the end of the movie. Of course, the sad end to the Gucci family, and to Maurizio’s wife, probably would not have occurred if these people had focused more on their relationship with Jesus Christ than on their own ambition, greed and pride.