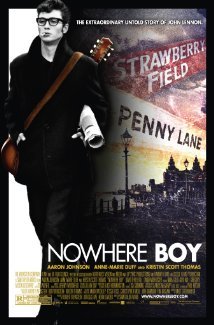 NOWHERE BOY is a British drama about the teenage life of John Lennon, founder of the 1960s rock band The Beatles. It focuses on his dysfunctional family relationships but also deals with the beginnings of his relationship with Paul McCartney, who later co-wrote most Beatles songs with Lennon. The movie’s most controversial aspect is the claim that Lennon had incestuous feelings for his estranged mother, Julia, who gave up her son to be raised by her sister, Mimi. Just when Lennon sorts out his relationships with his flirtatious mother and his stern, reserved aunt, tragedy strikes.

The reconciliation scenes in NOWHERE BOY are very powerful. There is also a great scene where Lennon gives a short lecture on love when his mother and aunt are arguing. However, the movie’s allegation of Lennon’s incestuous feelings is only based on one brief recording by Lennon after he had gone through Freudian psychological therapy. Also, in actuality, Lennon apparently began visiting his mother and her other family when he was 11, not 14 as the movie says. NOWHERE BOY contains plenty of strong obscenities and a lewd encounter between Lennon and his girlfriend.

(PaPa, Ro, H, B, RHRH, C, LLL, VV, SS, NN, AA, D, M) Strong, somewhat mixed pagan worldview with Romantic, humanist, moral elements, plus strong revisionist history that seems to over-sensationalize celebrity’s teenage years and brief funeral scene with a pastor quoting the New Testament in the background and protagonist in one scene seems to recognize the redemptive power of love but, otherwise, has personal desires to make a name for himself in music, and gets into trouble a lot, including hitting people; about 29 obscenities (including some “f” words) and one possible strong profanity; strong, sometimes disturbing violence, such as middle-aged man suddenly drops dead, protagonist sometimes strikes out angrily against people and actually cuts one person’s head so that it bleeds, and character suddenly hit and killed by car; strong sexual content includes depicted sexual petting between teenage boy and girlfriend followed by implied oral sex, teenage boy visits carnival with his estranged mother whom he hasn’t seen in years and scene is shot with a love song as if they are actually on a date, movie overtly implies teenage boy struggles with incestuous feelings for mother when he lies down on a couch and she puts her head on his chest, implied encounter when girl comes out of a backstage room with older teenager in band, protagonist kisses mother’s cheek as if she were his girlfriend (or so the movie implies), and protagonist’s mother is flirtatious with other males in a friendly way which drives him into a rage; rear male nudity in a sex scene; alcohol use and drunkenness; smoking; and, family members are estranged but eventually reconcile, protagonist argues with people including the stern aunt who raised him, protagonist’s mother apparently suffers from manic depression, and father leaves family in England to live in New Zealand.

NOWHERE BOY is a British drama about the teenage life of John Lennon of the 1960s rock band The Beatles. It mostly focuses on his often dysfunctional family relationships but also deals tangentially with the beginnings of his relationship with Paul McCartney, who co-wrote most of the Beatles songs with Lennon. Some of the movie’s subject matter is uncomfortable, and there is strong foul language throughout. Also, Paul McCartney and Lennon’s wife Yoko reportedly have disputed the more controversial uncomfortable portions of the movie, which apparently come from a controversial new book on Lennon.

The movie opens when John is about 14. John has been raised by his stern, reserved Aunt Mimi and her more outgoing husband, George, since he was young. After George suddenly drops dead, John sneaks out of the house to visit his estranged mother, Julia’s, home. The movie (falsely, we might add) indicates John hasn’t seen his mother since he was little and that he is surprised to learn from his cousin that she lives nearby.

As John gets to know his mother again, the movie hints that John has incestuous feelings toward his mother that he has trouble handling. Also, his mother is a flirtatious woman, even though she and her common-law husband have two little daughters. Eventually, John and Julia establish a more normal mother-son relationship as John starts to grow into his teenage years. She teaches John how to play the banjo and gets him interested in music, to the chagrin of John’s more practical aunt.

John decides to found the Quarrymen band, which later became The Beatles, with some high school friends, then meeting and adding Paul McCartney and George Harrison later. Meanwhile, John works hard to reconcile his aunt and his mother. Both women became estranged when John’s aunt started raising John while his father virtually abandoned the family, moving to New Zealand, and his mother got involved with other men.

Then, John gets jealous when Julia seems to flirt with other guys, including Paul and her own husband. This causes violent outbursts from John. Just when John starts to get over that jealousy, tragedy strikes. Happily, Paul, who has gone through some childhood traumas of his own, and Aunt Mimi are there to comfort him.

The reconciliation scenes in NOWHERE BOY are very powerful. There is also a great scene where John encourages his aunt and mother to reconcile by giving them a powerful short lecture on love. These scenes may remind Beatles fans of the more uplifting, inspiring parts of Lennon and McCartney’s music extolling transcendent love.

Regrettably, however, NOWHERE BOY contains strong sexual content, including the disturbing incest theme running through the movie. The only evidence for this theme, however, is a brief tape recording by John that, during one encounter with his mother at age 14, he had a brief incestuous thought about her. And, this recording came after John had had years of Freudian psychological therapy, which usually focuses on incest. The movie could have deleted this historically questionable theme without giving up any of its other dramatic effects. NOWHERE BOY also contains plenty of strong obscenities as well as somewhat disturbing violence.

Adult viewers, therefore, should approach NOWHERE BOY with extreme caution. In fact, many adult moviegoers probably will find that the positive aspects in NOWHERE BOY don’t justify having had to sit through the movie’s more offensive, disturbing qualities.

Finally, although the story of how John’s aunt and uncle ended up raising him is apparently true, John actually began making frequent trips to his mother’s nearby home when he was 11, not 14. That was also when John’s mother began teaching him about rock and roll and training him on the banjo she owned. Here, it is also interesting to note one comment about the movie made by Quarrymen co-founder Collin Hanton: “I don’t remember swearing that much!”

These facts indicate there’s far too much sensationalized revisionist history in NOWHERE BOY. It reflects a lack of trust by the filmmakers in their own subject.