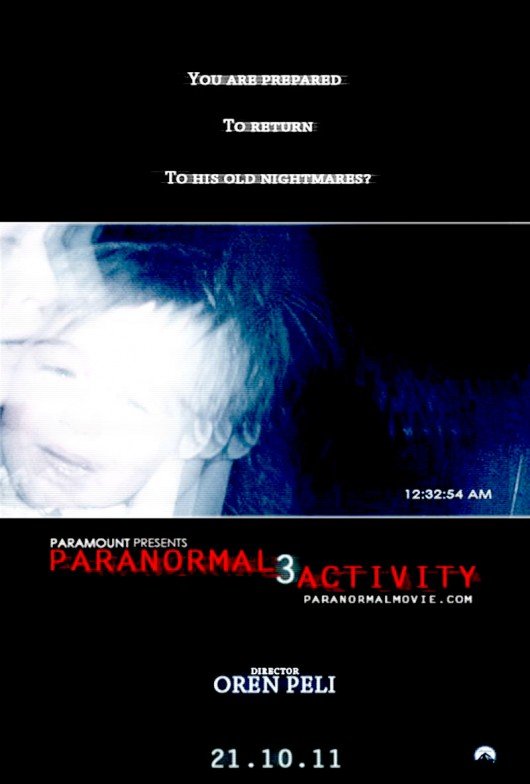 PARANORMAL ACTIVITY 3 reveals how demonic evil started haunting the family of two little girls, Katie and her younger sister Kristi, in 1988. Some re-discovered videotapes in 2006 show the family, including their mother and her videographer boyfriend, being haunted in their old home. Furniture and household items are toppled. The children are dragged at high rates of speed in between conversations with spirits. Finally, an entire kitchen’s worth of appliances disappears and reappears, crashing down from the ceiling. This leads the mother to believe there’s a ghost or demon. The family runs to grandmother’s house – only to discover she’s the head of a long-standing Satanic coven of witches.

The PARANORMAL ACTIVITY movies became popular because they provided scares without graphic violence or sex. PARANORMAL ACTIVITY 3 is packed with a sense of dread from the presence of occult evil in the family’s home. There are also numerous moments played for humorous fake scares. Though the occult, demonic forces are clearly evil, they win out in the end, just like the previous movies. Playing around with the occult is evil and very dangerous. Don’t be fooled by PARANORMAL ACTIVITY 3.

(OOO, B, LLL, VVV, S, MM) Very strong occult worldview in which a demonic presence and eventually a coven of witches terrorize a family with two young girls, with their grandmother ultimately revealed to be a witch who allowed their mother and her boyfriend to be killed before leading the children up a staircase and into an apparent indoctrination with demonic practices and, though the occult forces are clearly shown to be evil, they win out in the end; at least 26 obscenities and profanities, with a dozen “F” words and a dozen uses of God’s name in vain, including “JC” and “GD”; very strong and scary ghostly and demonic disturbances abound throughout the movie, with objects moving or being flung around rooms, two young girls frequently talking to an unseen spirit named Toby and often running around the house either playing with him or scared of him, girl climbs into a crawlspace in which the door slams shut behind her and traps her for a few moments, girl is dragged across the floor and flung through the air at high rates of speed, girl invokes a curse to bring a witch into the house and this winds up shaking the house like an earthquake while girl is in abject terror, a male caretaker discovers wild scrawls inside the crawlspace, a revelation of Satanic and witchcraft symbols throughout the girls’ grandmother’s house right before she’s revealed to be a witch with a coven of old witches living in a dark room in her house, old witches come toward a house chasing children and the male caretaker before starting a ritual fire on the home’s front lawn, adult male invokes a dead witch and gets a long scratch from an unseen claw, kitchen items disappear then reappear and crash down from the ceiling, mother levitates before her body is flung at her live-in boyfriend, witch appears and directs a spirit to tear a man’s body in multiple directions; no sex scenes but mother of two little girls lives with her boyfriend; no nudity; no alcohol; no smoking or drugs; demonic secrets are kept, people play around with curses, and witches apparently want to indoctrinate two little girls.

PARANORMAL ACTIVITY 3 is the third in a series of horror movies that have become a phenomenon in the past two years. Released by a major studio while filmed on a micro-budget (the first cost $15,000 and the second cost $3 million), they deliver scares mostly through the use of atmospheric tension with brief bursts of violence. Each movie consists of faux “found footage” taken from home video cameras, as different groups of one California family each employ video systems to film their homes and find out what’s causing disturbing poltergeist-type events. However, they are a cause for concern for Christian viewers as the terror within these movies is caused by demonic presences and witchcraft that eventually overpower the characters.

In the new movie, a prequel, viewers are shown the family of a young girl, Katie, who grows up to become the main female lead in the first “PA” movie and the surprise possessed killer in the second movie. Here, she and her even younger sister Kristi are the focus of the story’s demonic attacks, and while these are handled in brief bursts that are mostly not bloody or graphic, they nonetheless cross the line of being exploitative.

PARANORMAL ACTIVITY 3 starts with an opening scene in 2006, during which an adult Katie drops off some old possessions at her sister’s new house for storage. Among the boxes is a crate of old VHS tapes, which she says are from 1988 and were made by other relatives. After the 2006 family suffers a demonic attack, they find that the videotapes are suddenly missing, which leads to the movie’s action jumping back to the original tapes’ creation in 1988.

The rest of the movie shows how Katie and Kristi’s family, including their mother and her mother’s wedding-videographer boyfriend, move into a new house and are beset by strange occurrences. When the boyfriend sets up cameras around the house to figure out what’s happening, more occurrences are seen. Furniture and household items are toppled and the children are dragged or thrown around at high rates of speed in between conversations with spirits. Finally, an entire kitchen’s worth of appliances disappears and reappears, crashing down from the ceiling.

This leads the mother to finally believe there’s a ghost, and the family runs to their grandmother’s house – only to discover that the grandmother is the head of a long-standing Satanic coven of secret witches, and that they are in more danger than they ever anticipated. Ultimately, the mother and her boyfriend are killed in brutal fashion as the now-possessed children watch. Then, their grandmother takes them away, implying they are to be raised with demonic and witchcraft rituals.

While PARANORMAL ACTIVITY 3 employs impressive restraint in not wallowing in graphic violence and bloodshed until the final moments, it’s packed wall-to-wall with a sense of dread from the scary presence of occult evil in the family’s home. There are also numerous moments played for humorous fake scares. Though the occult forces are clearly evil, they win out in the end, just like the previous PARANORMAL ACTIVITY movies. Also, the little girls and other characters play around with the dangers of the occult. This is more than disturbing and depressing, it’s just plain wrong and can lead to evil occult practices in real life. Media-wise families will make sure their families stay away from the PARANORMAL ACTIVITY movies, including this third one. As God firmly warns in Deuteronomy 18:9-11:

“When you enter the land the LORD your God is giving you, do not learn to imitate the detestable ways of the nations there. Let no one be found among you who sacrifices their son or daughter in the fire, who practices divination or sorcery, interprets omens, engages in witchcraft, or casts spells, or who is a medium or spiritualist or who consults the dead.”