SIN CITY: A DAME TO KILL FOR

"There Is No True Justice Without Jesus" 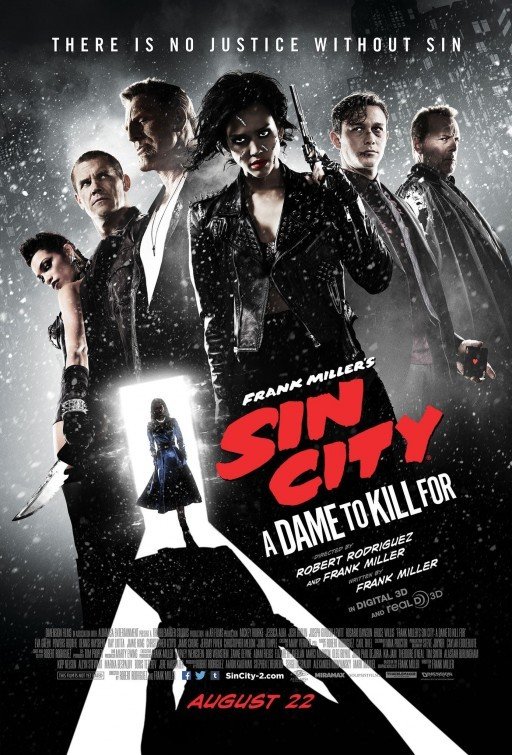 SIN CITY: A DAME TO KILL FOR is a crime thriller sequel with four interconnected stories about sin, corruption, vengeance, justice, criminals, and dangerous women. In one story, a man wakes up surrounded by dead men and must discern what happened. In another, a young man seeks vengeance against his corrupt father, who runs the city with an iron fist. The third story features a private detective manipulated by a deceitful former lover. The final story is about an exotic dancer seeking revenge against the young man’s corrupt father.

Despite its lurid content, SIN CITY: A DAME TO KILL FOR is well made. The mixture of live action and animated is effective, and the movie’s dramatic narrative is clear. However, A DAME TO KILL FOR has a mixed worldview, with pagan, moral and redemptive elements, and strong humanist content. The movie shows that sin and evil must be destroyed, but the characters do this by themselves, without God. A DAME TO KILL FOR also contains lots of graphic, explicit violence, foul language, sex, and nudity, plus revenge, adultery, prostitution, lying, and stealing.

(PaPaPa, B, C, HH, LLL, VVV, SSS, NNN, AA, DD, MMM) Very strong pagan worldview set in a dark and sinful world with pagan, moral, redemptive and strong humanist content with elements of justice for sin, but man becomes the ultimate source for enforcing justice in order to destroy sin and evil, often in a vengeful manner; at least 46 obscenities (including one “f” word) and four strong profanities, plus use of words like “slut” and “whore,” and direct and indirect mentioning of sex, body parts and sexual behavior; very strong, heavy, stylized violence with nearly 95% of the movie displaying people being hung, stabbed, shot, decapitated with a sword, punched, or severely injured, an insane woman deliberately cuts her face with a broken piece of glass, blood splatters are stylized in a black and white, comic book style; very strong sexual content includes married man has a sexual encounter with a local prostitute, married woman seduces a single man, and another married man (a detective) has liaisons with both women; some full frontal and frequent upper female nudity includes married woman is naked in most of her scenes (sometimes with see-through clothes) and prostitute character displays upper female nudity in her sex scene, plus rear male nudity in a sex scene and several female characters are dressed in very racy, half naked costumes; frequent alcohol use and drunkenness; frequent smoking of cigarettes or cigars, man swallows some prescription pills and another man appears to inject heroin; and, gambling, frequent lying and stealing, and scenes of revenge

SIN CITY: A DAME TO KILL FOR is the highly-anticipated crime thriller sequel to the 2005 movie SIN CITY. Both are co-directed by Robert Rodriguez and Frank Miller, and primarily based on Frank Miller’s SIN CITY graphic novel series. The new movie is composed of four intertwining plots. Two of the plots are based on two of the narratives (“Just Another Saturday Night” and “A Dame To Kill For”) from the SIN CITY series, and the other two plots (“The Long Bad Night” and “Nancy’s Last Dance”), also written by Miller, are exclusively original to the sequel. Despite some light moral, redemptive elements, the rest of the movie’s content is excessive, graphic and immoral.

In “Just Another Saturday Night,” Marv regains consciousness on a lonely road overseeing the projects of Basin City. He also finds himself surrounded by dead young men. He tries to how he got there.

The second plot, “The Long Bad Night,” follows Johnny, a boastful gambler determined to carry out a darker plot to annihilate Sin City’s prominent antihero, Senator Roark, at his own poker game. The Senator just happens to be Johnny’s biological father, from an affair with a prostitute. Johnny, along with his “good luck charm” (a young stripper named Marcy), soon discovers he beat the wrong person at cards, when Senator Roark has him severely beaten. Now, a heavily enraged Johnny seeks to avenge the wrong done to him.

In the third and longest plot, “A Dame to Kill For,” Dwight McCarthy, a private detective, battles with and keeps control of his past and inner demons. That is, until his past lover, Ava Lord, unexpectedly returns to his life. Ava manipulates and sexually seduces him into helping her escape her violent, billionaire husband Damien Lord and his extremely huge bodyguard, Manute. Dwight soon discovers Ava’s intentions and plan are a lot more deceptive and evil than he thought.

The fourth and final plot, “Nancy’s Last Dance,” follows Nancy, an exotic dancer. Nancy’s having difficulty coping with the suicide of John Hartigan, the policeman who saved her and now appears in hallucinations to counsel her. Forced into insanity, Nancy transforms into a short, black-haired woman with scars seeking to avenge John’s death by destroying Senator Roark.

Although SIN CITY: A DAME TO KILL FOR contains a mixed, distorted worldview, it is well made. The high artistic value predominantly comes from how Frank Miller creatively connected all four of the plots to form the overall message of the movie and how masterfully the movie’s live action and animation work together.

Unlike several movies in the past that have contained a few small plots to explain a larger plot, SIN CITY: A DAME TO KILL FOR doesn’t make it difficult for the viewer to understand what’s happening. It tells the viewer when one plot ends and another one begins. Also, it clearly tells the viewer what and how each specific plot contributes to the movie’s overall message of the movie.

The live action and animation in the movie work well together. The black and white aspect of the movie gives it a comic book, animation feel. So, it’s the actual human actors, cars, buildings, etc., that create the live action. Watching it in 3D, the movie undoubtedly feels like the actual comic series has come to life and yet still maintain its animated quality. The movie wouldn’t have worked if it had been done entirely in animation or entirely live action.

All that said, SIN CITY: A DAME TO KILL FOR has a mixed pagan worldview with pagan, moral, redemptive content, and strong humanist elements. The movie’s message is that sin and evil need to be destroyed with justice that’s powered and brought about by inherently good people. However, while it’s definitely true that sin and evil must be destroyed, that won’t be accomplished by human power and ability. As Scripture clearly teaches, Jesus Christ defeated sin and evil at the cross, so God is the one who defeats sin and evil.

Also, the justice and vengeance by the inherently good characters in the movie are driven by selfish motivation. They avenge the pain inflicted by the evil of others in order to bring a sense of peaceful satisfaction. This is contrary to what the Scriptures teach. As Paul writes in Romans 12:19 and 20, “Beloved, never avenge yourselves, but leave it to the wrath of God, for it is written, ‘Vengeance is mine, I will repay, says the Lord.’ To the contrary, ‘if your enemy is hungry, feed him; if he is thirsty, give him something to drink; for by so doing you will heap burning coals on his head.’”

SIN CITY: A DAME TO KILL FOR is a thrilling, action-packed movie, with some light positive elements, but it has a lot of graphic and explicit violence, foul language, sex, and nudity. There’s also a strong element of humanist vengeance and other immoral behavior, including adultery, prostitution, gambling, lying, and stealing. So, ultimately, the movie is unacceptable entertainment overall.