"Searching for Love in All the Wrong Places" 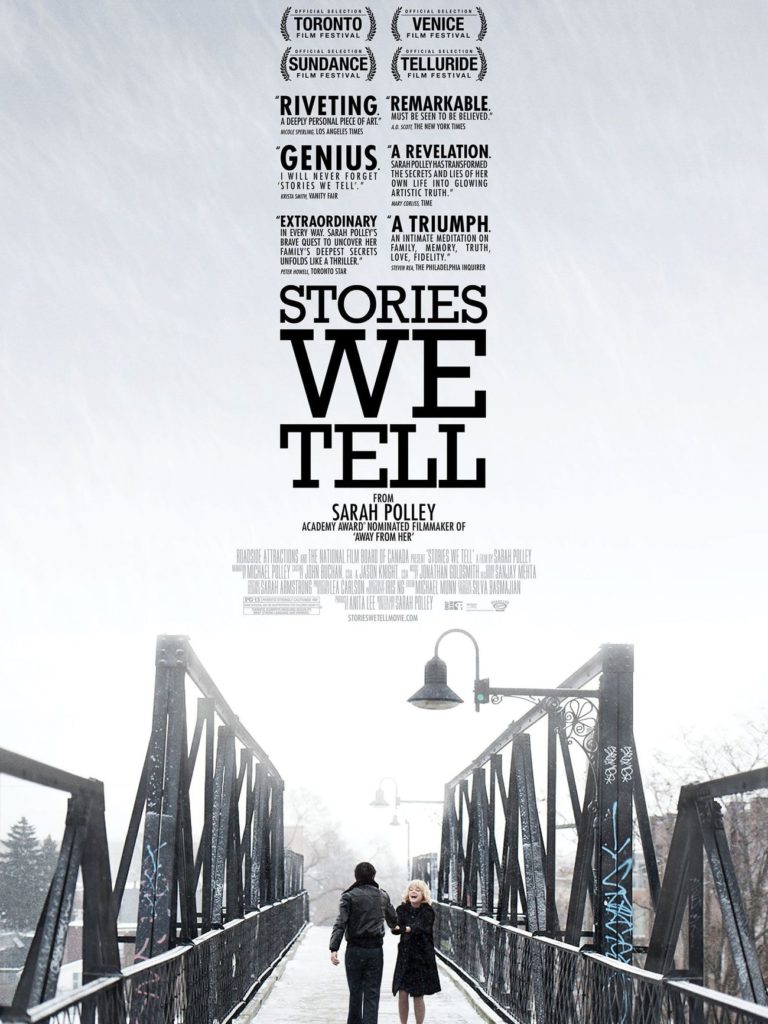 STORIES WE TELL is a mediocre documentary about an affair resulting in a child, Sarah Polley. Diane, the mother at the heart of the story, died of cancer when Sarah was 11. Diane had an opportunity to star in a play out of town. Michael, her husband, was actually pleased. However, while appearing in the play, Diane had an affair with Harry, and Sarah was born. Eventually, Sarah learns the truth, and decides to make this documentary. She lets the other people involved speak about what happened.

STORIES WE TELL is boring and overlong, with multiple endings. It’s also a little self-indulgent and contradictory. For example, the movie implies that eyewitnesses can have wildly different versions of a situation or an event, but, in the end, that is not really true in this case. Everyone actually tells the same basic story, with minor differences and different perspectives. The biggest problem, however, is that the movie implies that the “love” causing the adultery in the story was a good thing. Thus, STORIES WE TELL perpetuates ungodly, false notions of love, confusing it with lust.

(PaPa, Ho, L, S, N, D, MM) Strong pagan worldview where love is sought but misunderstood in a documentary revealing the story of an affair resulting in the birth of a child, plus a homosexual reference; one “f” word and three light OMG profanities; no violence; no portrayed sex but considerable discussions about some instances of fornication and adultery and one male child interviewed mentions his “boyfriend”; brief upper male nudity; no alcohol; considerable smoking; and, some dishonesty and bad role models, plus movie seems to promote the false idea that truth is relative.

STORIES WE TELL is a sad documentary telling the story of an affair resulting in a child, Sarah Polley, as seen through the eyes of family members. Sarah grew up with and Harry, the man she learned was her actual father. The story is of a search for feelings of love rather than true Godly love.

Sarah Polly made the documentary about herself. She discovers that Michael, the man she grew up thinking was her father, was not. As the truth became known, both the father she knew and the biological father she met later found the story compelling enough to want to write about it. Sarah then took it upon herself to turn the stories of several of those involved into the movie STORIES WE TELL.

Diane, the mother at the heart of the story, died of cancer when Sarah was 11. Diane had a failed previous marriage and lost custody of two children to the father. She then met Michael Polley, had sex outside of marriage with him, then married him. She was very spontaneous and outgoing, but Michael wasn’t. The marriage produced children but was not satisfying to Michael or Diane. She had an opportunity to star in a play out of town, and Michael was actually pleased that she could go away for a spell. While in the play, Diane had an affair with Harry. They supposedly found “love.”

STORIES WE TELL is boring and overlong, with multiple endings. It’s also self-indulgent and contradictory. For example, the filmmaker, Sarah Polley, sometimes implies that her movie is about how different people in a family can have wildly different views of the same event or situation. However, if you examine the details of the different family stories in the movie’s various interviews, you will find that everyone tells basically the same story, though some clearly knew more things than others.

The biggest problem, however, is that the movie confuses love with lust and implies that “love” causing and resulting from the adultery in the story was a good thing. This perpetuates the false notion that the purpose in life is to feel loved. You must do whatever it takes to feel loved, regardless of marriage vows or existing children. Of course, Godly love is much greater than just a feeling (though it is nice to feel loved). Godly love isn’t about what you need. It’s about what you can give to others. It’s about faithfulness, integrity, kindness, forgiveness, and unselfishness. Someone who learns to love in this way is often loved in return.

When happiness is measured only in feelings, marriages and families can be torn apart. The kind of physical love in this movie is the kind of lust that wanes quickly. It’s the children born to parents who fall out of lust who suffer the most. However, the children raised by parents who love each other, as God would have them do so, are blessed.

STORIES WE TELL may warm the hearts of those seeking love in all the wrong places, but to those who understand God’s true love, it’s a very sad story. The movie also seems to promote the idea that truth is relative.