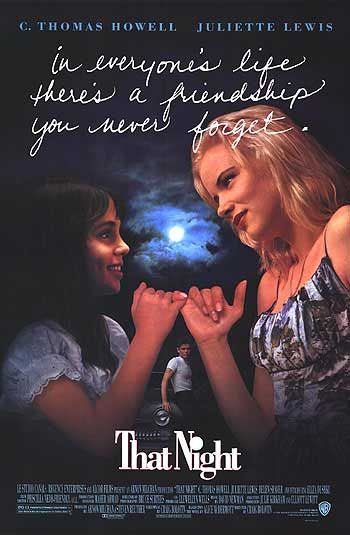 THAT NIGHT revolves around an approximately 12-year-old voyeur named Alice, living on Long Island, NY, in 1961, and the object of her sexual instruction, the Catholic educated Sheryl, a 17-year-old neighbor who gets pregnant and gives up the baby for adoption. Preoccupied with sex, THAT NIGHT deals with some complicated issues from a humanist perspective. The movie does state that abortion is wrong, but it offers nothing but the hollow hope that human love gives life real meaning.

(H, L, NN, SS, A/D, B, M) Humanist worldview; 6 profanities & 2 obscenities; explicit sexual language used by children & teens; lust portrayed as love; premarital sex & pregnancy, although abortion is condemned (thanks to Catholic affiliation); alcohol & cigarettes glamorized (ALL the things you don't want your teenager to do); and, disobedience and disrespect of parents (including the line, "Just because they're your parents doesn't mean you gotta love 'em.")

THAT NIGHT revolves around a perhaps 12-year-old girl named Alice, teetering on the brink of puberty. Living on Long Island, NY, in 1961, Alice wants to learn about love and finds the answers by peeping through her bedroom window at Sheryl, her 17-year-old neighbor. Educated in a Catholic girls’ school. Sheryl desires to live as rebelliously as possible because THAT gives life its zest. When Sheryl’s father dies of a heart attack, she turns to Rick, who has lost both parents. They fornicate within their second “date” in a fairly explicit scene at an amusement park. Sheryl and Rick’s frolicking attracts not only Alice’s attention, but the attention of envious mothers who also stare out their windows. Of course, Sheryl gets pregnant. Sheryl is spirited off to a convent to have the baby and give it up for adoption. Through bribery, lying and running away, Alice brings the lovers back together.

THAT NIGHT deals with some very complicated issues, but it places them squarely in the middle of a confused, humanist world. To its merit, the movie shows that sin does have messy consequences, and it states that abortion is wrong. Riddled with cliches about love and about God and the hereafter, THAT NIGHT lives down to the expectations of its unexciting title. By completely missing the truth of God’s love, THAT NIGHT offers nothing but the hollow hope that human love gives life real meaning.