THE BALLAD OF LITTLE JO 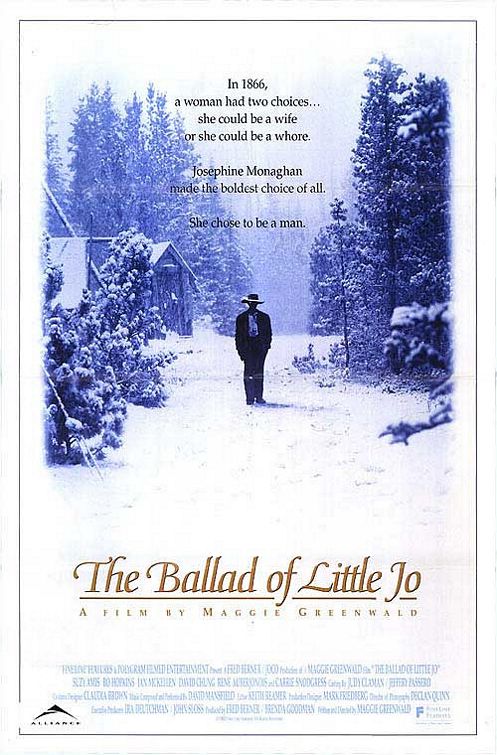 In THE BALLAD OF LITTLE JO, proper Bostonian Josephine Monahan bears a child out of wedlock, moves out West, then assumes a male identity to cope with a dangerous situation. The movie is filmed in beautiful mountainous country, and the cinematography is breathtaking, and acting performances quite good; but the film also contains scenes of adultery (explicit), attempted rape, nudity, and violence (in the rape scenes).

Written and directed by a woman, Maggie Greenwald, THE BALLAD OF LITTLE JO gives a bird’s-eye view of the wild west from a woman’s point of view. Beginning life in Boston as Josephine Monaghan, Little Jo bears a child out of wedlock, is disowned by her family, and heads west. Meeting up with “Straight” Hallander and working in his traveling store, Jo has to ward off his advances. She concludes after this episode that survival is not possible given her present circumstances. Thus, she determines to survive in the only way she believes possible so she leaves him and assumes a male identity. She is accepted by the local men as another man. With the ever-lingering fear of discovery, she buys land and attempts to establish her own ranch so she can find peace. Little Joe spends the entire film in masquerade and even becomes proficient as a gunslinger.

The movie is filmed in breathtaking mountainous country, and the cinematography is outstanding. The performances are generally good, but with some scenes weak in pace. Several scenes take on a good deal of humor. The treatments are tastefully done when they could easily have eroded into questionable overtones considering Joe’s charade. However, the film also contains scenes of adultery (explicit), attempted rape, nudity, and violence in the rape scenes.