"A Muppet of a Movie" 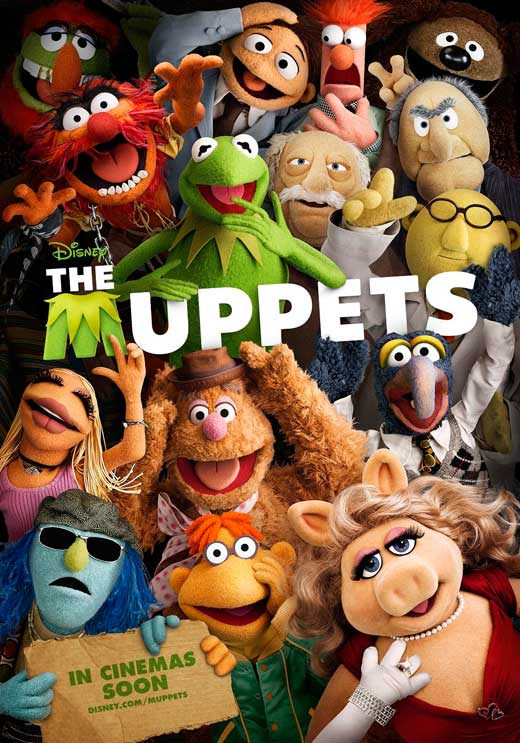 In THE MUPPETS, a fan named Walter learns that oilman Tex Richman wants to buy the Muppets studio for $10 million dollars, to drill for oil. Distraught, he searches for Kermit the Frog to tell him the oilman’s plans. Kermit is saddened, but isn’t sure he can get his whole gang together to raise the money needed to stop Tex. Driving from city to city, Kermit, Walter, and Walter’s brother and girlfriend find the rest of the gang. To get the money, however, they still need an A level actor to host a new show. Kermit and his friends are also bothered by a group of grungy imitators who want to steal the spotlight.

THE MUPPETS is full of fun, clean laughs. Well made and highly entertaining, THE MUPPETS is one movie you can take the whole family too. Slight caution is advised due to a mild environmentalist message and scenes where the Muppets are hitting each other. Overall, however, THE MUPPETS emphases that good clean entertainment is what people want to watch. Stressing the importance of loving, supporting, and being a family, THE MUPPETS also has a strong moral worldview.

(BBB, C, CapCapCap, L, V, M) Very strong moral worldview extolling family and clean entertainment, marriage valued, teachers valued, children are said to be the greatest gift, and extols the idea that people want good and clean content rather than harsh, bad content, plus a scene where Kermit the frog gets out of the “Good Shepherded Church” van and beams of light come from it, an environmentalist undertone as the oil entrepreneur is the bad guy but he’s redeemed in a capitalist way, and very strong capitalist content where the Muppets try to save their business and their brand, and ; one mild exclamatory profanity and some scatological jokes as Fozzie the Bear walks around in fart shoes; light comic violence includes Muppets hitting each other, Muppet pushes bad guy off a tall building, child hits teacher (but rebuked), man hits other man; no sex but man kisses woman on the cheek; upper male nudity; no drinking; no smoking or drug use; kidnapping but rebuked and yoga references.

THE MUPPETS is a widely entertaining adventure that brings back all our favorite Muppets. Kermit the frog and the whole gang fight to bring back their clean-cut show to the big screen. This storyline conveys the powerful message that people want wholesome entertainment.

Walter has always loved the Muppets, and finally he gets the opportunity to meet them in person at their studio in Los Angeles. Along with his brother Gary and Gary’s girlfriend Mary, the three head out of Smalltown to reach L.A. When they all arrive at the studio, Walter overhears that an oilman wants to buy the studio for $10 million dollars to drill for oil.

Distraught, Walter, Gary, and Mary search for Kermit the Frog to tell him the plans of the oilman, Tex Richman. Kermit is saddened, but is not sure he can get his whole gang together to raise the money needed to stop Tex. Driving from city to city, Kermit and the others find Fozzie Bear in Reno performing with a grungy group of imitators called the “Moopets,” Miss Piggy in Paris as a fashion editor, then Gonzo and the rest of the gang.

The whole gang goes from studio to studio to try to get airtime for a show to raise money. They come to one Hollywood executive, Veronica. Veronica at first rejects the Muppets, telling them that people don’t want such clean entertainment any more, but the Muppets know that’s not true. Eventually, they’re able to convince Veronica to give them airtime. Veronica only makes a deal with them, however, if they get an A level actor to host the show.

Excited about being altogether again, The Muppets clean up their old theater and start rehearsing for a show. A little off kilter, having been apart for some time, the Muppets work together singing and dancing as they go. The adventure is heightened when Kermit can’t find a host for the show, and the grungy Moopets are out to steal the spotlight.

THE MUPPETS is full of fun, clean laughs. Well made and highly entertaining, THE MUPPETS is one you can take the whole family too. Some caution is advised due to an environmentalist undertone of the oil entrepreneur being the bad guy, plus a few violent scenes for children where Muppets are hitting each other.

Overall, THE MUPPETS emphases that good clean entertainment is what people want to watch, not the negative imitators like “the Moopets” or bad TV shows against teachers. Stressing the importance of loving, supporting, and being a family, THE MUPPETS has a strong moral worldview.

Rent or Buy THE MUPPETS: