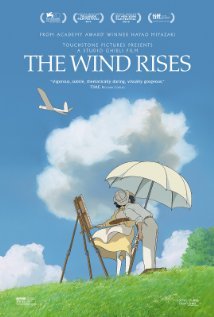 THE WIND RISES is the Japanese version of a movie about a pioneer airplane engineer, from acclaimed Japanese animator Hayao Miyazaki. Disney is releasing a dubbed version on Feb. 21, 2014. The story is about Jiro Hirokoshi, the aeronautical engineer behind creation of the Japanese Zero fighter plane, which created much havoc during World War II. As young Jiro begins working for the airplane division of Mitsubishi, he recalls a teenage girl he helped during a terrible earthquake. Eventually, he reunites with her after she’s grown into a beautiful woman. She inspires him as he begins to build warplanes for Japan’s military government.

THE WIND RISES is beautifully animated, especially when the hero reunites with the girl, and when he dreams about the beauty of airplanes. However, the movie becomes a very strange, and rather uncomfortable, salute to the “beauty” behind a war machine designed to take away people’s liberties rather than defend them. Also, the story meanders a bit. Thus, while one can admire some of the artistry in THE WIND RISES, the movie fails to be worthy of true commendation.

(RoRoRo, AC, So, L, V, N, D, MM) Very strong Romantic worldview about the beauty of aviation and airplane design, and the beauty of romantic love, but the beauty eventually is used to serve the making of a war machine designed to take away people’s liberty, some allusions to the evils of national socialism or fascism, but the hero never has the courage to speak out publicly against it, and the movie never really criticizes him for that failing but chooses to focus on false beauty; three or four “d” words; some violent images such as a powerful earthquake causes massive destruction, massive fires caused by the powerful earthquake, two airplanes crash, images of crashed airplanes; no sex scenes, but a couple marries, and they are shown in their bedroom at night, and their guest tells them they need to get married before he allows them to sleep in his house, so they do; upper male nudity; alcohol use; smoking; and, marriage is treated as somehow sacred, but it still has no godly foundation in the context of the movie, and movie seems to minimize some horrors of World War II national socialism or fascism, though it briefly criticizes it, but somewhat too obliquely.

THE WIND RISES is the Japanese version of what is said to be famed Japanese animator Hayao Miyazaki’s last movie (he says he’s retiring). Disney is releasing a dubbed version of the animated feature on Feb. 21, 2014. The movie is beautifully drawn, but the story meanders a bit. Also, eventually, it turns out to be a story about the engineer, Jiro Hirokoshi, behind the Japanese Zero fighter plane, a weapon of war that Japan’s fascist government in the middle of the 20th Century used to terrorize its victims during World War II. Thus, the movie is a very strange, and rather uncomfortable, salute to the “beauty” behind a war machine designed to take away people’s liberties rather than defend them.

The movie begins with young Jiro dreaming of flying his very own little plane attached to the roof of his family’s home. The rest of the movie contains other dreams of Jiro’s about the beauty of flying and flying machines.

While Jiro dreams of airplanes, including fanciful encounters with a famous Italian engineer, the movie shows Jiro helping a teenage girl in a massive earthquake and starting work for Mitsubishi in its aircraft division. After a trip to Hitler’s Germany to pick up tips on building steel airplanes, Jiro meets the girl all grown up, and the two fall for one another. The girl inspires Jiro to keep working on his career dreams, but a tragic illness clouds their future, hopes, and dreams.

THE WIND RISES contains echoes of the destruction that World War II wrought, including the oppression of the Japan’s military government during that time. One of the most striking is when Jiro dreams of walking amid the wreckage of a bunch of burned and crashed Zero fighters (the Zero was notorious for not giving the Japanese pilot much protection). However, these are just mere echoes.

Ultimately, therefore, while one can admire some of the artistry in THE WIND RISES, the movie fails to be worthy of true commendation. Also, the story meanders a bit. Thus, the protagonist doesn’t encounter his love interest again until more than halfway through the running time. Consequently, the movie’s premise seems divided between the protagonist’s fascination with the beauty of man-made aircraft and his fascination with the girl of his dreams.

It’s clear that Miyazaki is an extremely talented animator. However, some of his movies contain too many pagan, immoral (and sometimes even occult) elements.