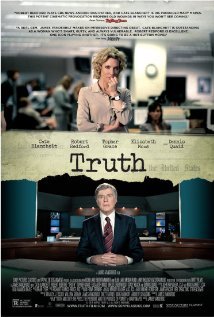 TRUTH is a liberal movie defending a phony CBS News story in 2004 and glorifying the career of Dan Rather, a notoriously biased liberal reporter. The movie opens with CBS Producer Mary Mapes and her team at 60 MINUTES finding alleged evidence that Pres. Bush went AWOL for one year as a pilot, in 1972-73. Mary finds some alleged military documents apparently proving that and other criticisms of Bush’s service record. However, doubts are cast when it appears that the documents were typed and printed from a modern computer. Mary goes in front of a CBS committee to defend their story. TRUTH is propagandistic and one-sided. A simple investigation pokes many holes in the arguments offered by Mary Mapes in the movie and elsewhere. Also, the acting in TRUTH is boringly earnest and self-righteous in that boringly earnest and self-righteous way liberal actors have when trying to attack Republicans, Christians or conservatives. Finally, gratuitous foul language is a big problem. Ultimately, therefore, moviegoers interested in captivating movies, wholesome entertainment and real truth would do well to steer clear of this TRUTH.

(RoRoRo, APAPAP, AcapAcap, LLL, A, D, MMM) Very strong Romantic, Anti-American, liberal worldview with some anti-capitalist criticism of the “system” that overlooks the fact that it’s big government and sinful human nature that are the real problem, not big business and the wealthy or powerful; at least 46 obscenities (half or more are “f” words), eight strong profanities, seven light profanities; no violence; no sex; no nudity; alcohol use; smoking; and, greedy biased “reporters” take gleeful delight in trying to take down a person they oppose politically for fame and glory.