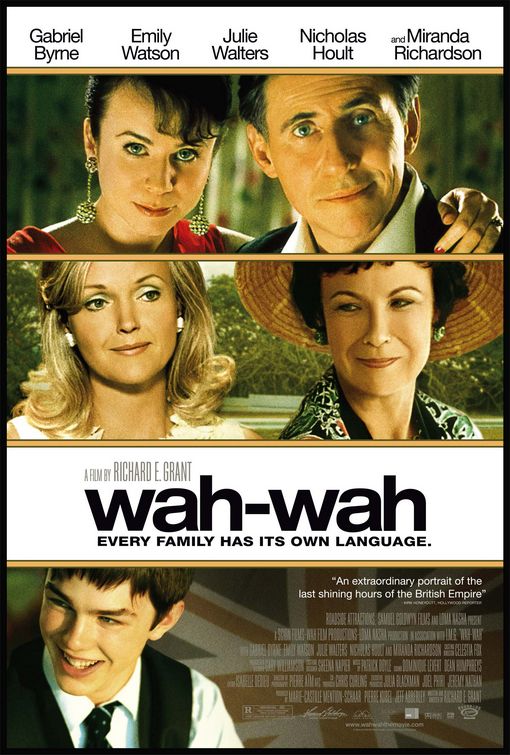 WAH-WAH is a comedy drama about an English teenager coping with his family’s struggles in 1960s colonial Africa. Both Ralph and his father Harry have been deserted by Ralph’s mother. Harry, who serves as the country’s minister of education, takes to drinking after his wife leaves and sends Ralph to boarding school. When Ralph returns as a teenager, he discovers his father has remarried Ruby, an American “commoner.” Ralph adjusts to his new family situation and develops fondness for his stepmother. His father’s alcoholism, however, is growing out of control. Ralph and Ruby combat Harry's abuse with their most potent weapon – unconditional love.

WAH-WAH is actor Richard E. Grant’s directorial debut. It is based on his own experiences growing up in colonial Africa. This personal connection gives the movie a realistic feel. The story alternates from being funny, tragic and touching. It shows the dark side of alcoholism, as well as the repercussions alcoholics force their loved ones to face. Ultimately, WAH-WAH shows the triumph of Christian love and includes other Christian content, but it also contains strong foul language, sexual content and disturbing scenes of alcohol abuse. Therefore, MOVIEGUIDE® advises extreme caution.

(CC, B, Pa, LLL, V, SS, N, AAA, DD, M) Strong Christian worldview with moral elements ultimately showing the triumph of Christian love and forgiveness including portrayal of a child praying, a kind-hearted priest, and several performances of a group singing hymns, including “All Creatures Large and Small,” and “Onward Christian Soldiers,” plus some pagan elements regarding a dysfunctional, alcoholic father whose first wife left the family; 38 obscenities including a few ‘f’ words and eight mostly light profanities; some violence including a drunken man shattering a glass against a wall and firing a gun at a teenager (although missing), and a stepmother slaps her stepson for disrespectful behavior; briefly depicted adultery and a few moments of implied adultery; brief naturalistic upper male and female nudity depicting South African natives as well as a few other scenes of naturalistic upper male nudity; an alcoholic is depicted intoxicated in several scenes, although his behavior is clearly portrayed as harmful and wrong; many scenes of smoking including two teenagers smoking what may be marijuana or possibly a hand-rolled cigarette; and, lying, disrespectful behavior to elders and poor parental role models.

WAH-WAH is a well-made comedy drama about an English family in 1960s Swaziland, a small British-controlled African nation.

The movie focuses on Ralph Compton (Nicholas Hoult) and his interaction with his unstable family. Both Ralph and his father Harry (Gabriel Byrne) have been deserted by Ralph’s mother Lauren (Miranda Richardson), which causes great hardship for the Comptons. Harry, a likable and well-meaning man who serves as the country’s minister of education, takes to hard-drinking after his wife leaves, and sends Ralph to boarding school.

When Ralph returns home as a teenager, he discovers that his father has remarried American “commoner” Ruby (Emily Watson). Although it takes some time, Ralph adjusts to his new situation and develops a fondness for his new stepmother. Harry, however, is still in love with Lauren. Her occasional appearances in Swaziland usually drive him to binging on alcohol and abusive behavior.

Ralph struggles to cope with his confusing family situation, but finds puppetry and singing as a creative outlet. Harry’s drinking becomes an increasing hardship for both Ralph and Ruby, and they struggle to keep him on the wagon. Despite Harry’s dangerous alcoholic episodes, Ralph and his stepmother combat his abuse with the most potent weapon at their disposal, unconditional love.

WAH-WAH, which is actor/author Richard E. Grant’s directorial debut, is based on his own experiences growing up in colonial Africa. Grant’s personal connection to the story gives the movie a very realistic feel. The story alternates from being funny, tragic and touching. Harry’s complicated character is played deftly by Gabriel Byrne. Emily Watson is also outstanding as a fish-out-of-water American in the midst of British upper-class snootiness.

The movie shows the dark side of alcoholism, as well as the repercussions alcoholics force their loved ones to face. Ultimately, however, WAH-WAH is a moving story that shows the triumph of agape love.

Thus, the movie has a Christian premise that includes portrayals of a child praying, a kind-hearted priest and several performances of a group singing hymns, such as “All Creatures Large and Small,” and “Onward Christian Soldiers.” Media-wise audiences should be aware, however, that the movie contains strong foul language, brief sexual content and many scenes of alcohol abuse, which makes it inappropriate for children and most teenagers. MOVIEGUIDE® advises extreme caution.