WALKING WITH THE ENEMY 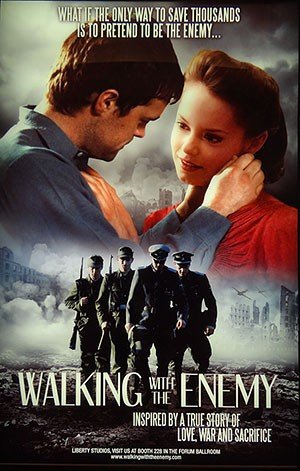 Inspired by a true story, WALKING WITH THE ENEMY takes place during the final 18 months of World War II. The Hungarian leader sees how the war is going and begins to cut ties with Hitler’s National Socialist regime. Because of his decision, Hungarian Jews are no longer protected and are seen as the enemy by the desperate Nazi soldiers. Elek is a young Jewish man desperate to find his family members, who were taken away. In order to help save Jewish lives, he starts impersonating Nazi officers using a stolen uniform. The longer he does this, the more people are saved, but the more his life is in danger.

WALKING WITH THE ENEMY is a very exciting, inspiring World War II drama. The acting is powerful. The sets and special effects are very impressive for an independent movie. Emotionally griping, WALKING WITH THE ENEMY also has a very strong moral worldview, with strong Christian elements, where Jews and Christians risk their lives to save men, women and children. However, the violence, though not gratuitous, is still intense and warrants strong caution.

(BBB, CC, VV, S, A, D) Very strong moral worldview with strong Christian elements about Christians and Jews helping each other during World War II with strong themes of sacrifice and courage, a Catholic church helps orphans, many Christian symbols, and a “Thank God” is muttered inside the church; no foul language; some non-gratuitous war violence includes fist fights, men and women being shot point blank, mass executions by fire squad, bombings, a man is strangled, Jews are beaten at labor camp, and one man’s leg is crushed, but not much blood is seen; intense scene where two Nazi men follow a young women home and force their way inside and try to rape her while her family helplessly sits by, but someone enters and saves her, plus an unmarried man and women share a few passionate kisses; no nudity; light drinking; light smoking; and, no immoral content.

Inspired by a true story, WALKING WITH THE ENEMY takes place during the final 18 months of World War II.

Hungarian leader Regent Horthy (Sir Ben Kingsley) sees that the Allies will eventually defeat Hitler’s National Socialist regime in Germany. So, he cuts ties with Germany. Because of his decision, Hungarian Jews are no longer protected and are seen as the enemy by the desperate Nazi soldiers.

Elek Cohen, a young energetic Jew, rushes from the city to his home village to make sure his family is all right. Upon arriving, he and all the other young men are forcibly sent to a labor camp. The Germans ruthlessly work the young men, killing anyone who becomes sick or is injured. When some Allies planes strike the compound, Elek and the prisoners have their chance to escape.

Once Elek gets back to his village, he finds out his entire family was relocated. Desperate to find them, he goes back to the city to see if he can find more information on where his family might be. In the city, Elek finds himself with a group of resisters who are forging passports for Jewish families so they can escape to Switzerland.

One day, a group of Jews are being led to a train for their impending execution. In an attempt to save them, Elek puts on a stolen Nazi officer uniform and uses his perfect German accent to order the soldiers to transfer the Jews to him. Miraculously, this works, and he is able to save many lives.

Reinvigorated to make a difference, Elek goes on dangerous missions posing as a German officer for the remainder of the war. The longer he goes, the more likely it becomes for him to be discovered. Along the way, he develops a relationship with Hannah, a young Jewish woman whose life he had saved.

WALKING WITH THE ENEMY is a very exciting World War II drama. The acting is powerful, and the sets and special effects are very impressive for an independent movie. The nature of the story makes it gritty and rough, but never gratuitous. The story moves quickly, but forgets to convey to the audience where they are taking it at times. Otherwise, however, the movie holds interest throughout.

WALKING WITH THE ENEMY has a very strong moral worldview with strong Christian elements. At the center of the story are Jews and Christians who risk their lives to save men, women and children. Inspirational and emotionally gripping, the movie is a testament to the impact one man can have against an evil empire. The violence, though not gratuitous, is still intense and warrants strong caution.

Watch WALKING WITH THE ENEMY: