"Love in the Midst of War" 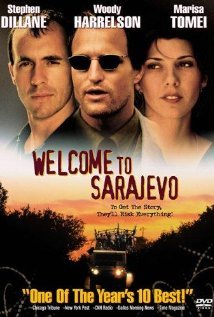 WELCOME TO SARAJEVO tells the story of one man’s awakening to his humanity in the midst of man’s inhumanity. Michael Henderson is a British television reporter based in Sarajevo during the Serbian siege. Michael reports on the wounded, dead and dying. He becomes upset by an American reporter who walks down the street to pick up a sniper victim and carry her into a church. Michael refuses to videotape the valiant scene and is scooped by the other networks. Even so, the American’s act of compassion transforms Michael. He starts to take interest in the children of Sarajevo. He promises one nine-year-old girl that she will escape to England. Eventually, he faces many obstacles to rescue this little girl.

WELCOME TO SARAJEVO combines documentary footage with drama so the movie appears to have been shot in the midst of the siege. The acting is subdued and realistic, and the storyline is very emotional. There are hints of Christianity, although it is clear that there are many so-called Christians commiting war crimes. There is compassion for the Bosnians, but only brief references to the Christian-Muslim conflict. This film shows compassion at work when Michael rescues a young girl from this very violent war.

(C, LL, VV, S, A, D) Mild Christian worldview about a reporter who learns to care the civilians caught in a horrendous war; 13 obscenities & 5 profanities; war violence including shots of bloody massacres, wounded people, murdered babies, & the atrocities of war; very mild sexual innuendo & husband & wife in bed with no sexual activity or exposure; alcohol use; and, smoking & drug use.

WELCOME TO SARAJEVO is a unique piece of filmmaking which draws the audience into the heart of the battle over this once beautiful city as it tells the story of one man’s coming to terms with his humanity in the midst of man’s inhumanity. Based on a true story, the movie tells about war correspondent Michael Henderson (Stephen Dillane), a British television reporter based in Sarajevo during the relatively recent Serbian siege intended to drive the Bosnians out of the city.

At first, Michael is all business in his reporting on the war and getting the best shots of the wounded, dead and dying. While he works, bombs, shellings and snipers create an atmosphere in the city of hopeless depression and despair.

As he reports on a shooting outside a church, Michael is upset to see an audacious American reporter, Flynn (Woody Harrelson), calmly walk down the sniper-ridden street to pick up a Bosnian woman who has been shot in the stomach and carry her into a church. Michael is so upset by Flynn’s cavalier attitude and unprofessional conduct that he refuses to videotape Flynn’s heroic rescue. As a result, Michael’s network is scooped by other networks.

Slowly, Flynn’s act of human courage transforms Michael. Michael starts to take interest in the children of Sarajevo, in particular in the children of an orphanage on the front line of the bombings. He even promises one nine-year-old orphan girl that she will get to England. He sends report after report demanding that NATO and the UN rescue these children.

Finally, a relief bus is given the right to take out only the youngest babies who can easily be adopted. Michael is told that the his orphan friend is too old, so he says that he will adopt her. When he tells his wife in England, who is valiantly trying to rear their two children without him, she understands. Even with his wife’s blessing, he must face other obstacles before he can rescue this little child.

In many ways, this is a Mother Teresa type story. Michael starts out wanting to be an objective reporter, then he becomes a champion who is trying to solve the Bosnian/Serb conflict, and finally he realizes at least he can rescue one person. Mother Teresa realized that she could rescue one person at a time, believing that each individual, created in the image of God, was important in the midst of the political quicksand of India.

WELCOME TO SARAJEVO is so unique that it may not find much of an audience in America. In an incredible way, it combines war footage with drama so that it appears that the movie is being filmed in the midst of the war. For the most part, the acting is very subdued and realistic, and the level of realism and emotional involvement is exceptional. Woody Harrelson, as the maverick American reporter, seems out of place, although it is conceivable that this is intentional and that his character is modeled after a real American reporter (even though his casting must have been based on trying to reach an American audience with his growing marquee value).

The screening of WELCOME TO SARAJEVO at the Director’s Guild occurred back to back with a screening of COPLAND. The quality of WELCOME TO SARAJEVO was such that COPLAND looked like a sophomoric farce, overdone, poorly-conceived, and ineptly-directed. In fact, the contrast between the quality of the two movies clarifies why this year’s Venice Film Festival avoided American movies in favor of British films.

Although WELCOME TO SARAJEVO does not have a Hollywood budget and there are a few moments when it goes over the top, this is fine filmmaking. The movie is not propagandistic. There are hints of Christianity, although it is clear that there are many of the bad guys who call themselves Christians, though they are committing the worst atrocities. There is compassion for the Muslims, but only brief derogatory references by Flynn about the Christian-Muslim aspects of the conflict. In contrast, this film shows true Christianity at work when Michael rescues the young girl against all odds, in the midst of the cruel Serbian crusade against the Bosnian Muslims and the equally vile Muslim response to the Serbians.

Rent or Buy WELCOME TO SARAJEVO: