"The American Dream Found in a Kitchen" 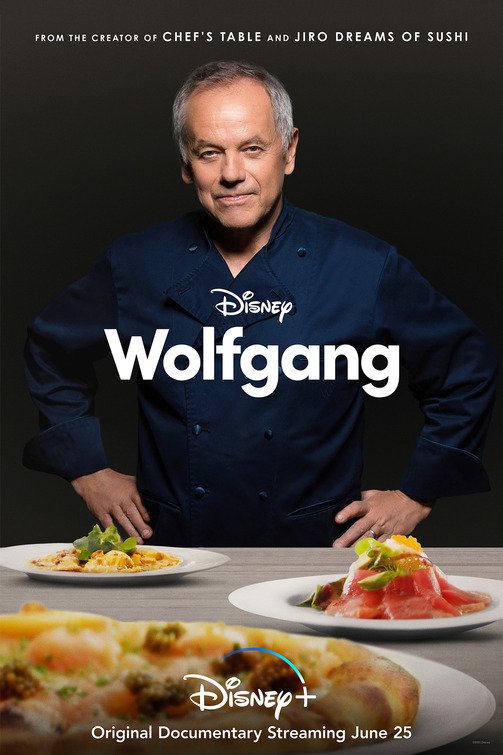 WOLFGANG is a documentary streaming on Disney Plus that recounts the life story of the first celebrity chef, Wolfgang Puck. The movie details his rise from poverty and an emotionally abusive childhood in Austria to achieve massive success after embracing capitalism in America. Using anecdotal interviews, re-enactments and archival photos and videos that bring his story vividly to life, this documentary is an excellent and inspirational tale of the American Dream in action.

WOLFGANG uses a straightforward documentary approach, but it’s a compelling and positive tale that should inspire viewers to find the successful path to their own dreams. It’s a very moral, patriotic, pro-capitalist tale of a man trying to do his best to make the world happy through his talents for cooking and innovative business sense, as well as learning to be a better man, husband and father while navigating his life’s ups and downs. The movie has one light profanity and brief discussion of an abusive stepfather and a divorce. Otherwise, WOLFGANG is appropriate viewing for all ages, though it’s aimed at teenagers and adults in terms of comprehension.

(BB, PPP, CapCapCap, L, M):
Dominant Worldview and Other Worldview Content/Elements:
Strong moral worldview, not overtly biblical, but very patriotic and pro-capitalist, while celebrating the American Dream
Foul Language:
No obscenities but one light OMG profanity
Violence:
No violence
Sex:
No sex
Nudity:
No nudity
Alcohol Use:
No alcohol use
Smoking and/or Drug Use and Abuse:
No smoking or drugs; and,
Miscellaneous Immorality:
Some discussions of emotional abuse by stepfather and divorce.

WOLFGANG recounts the life story of the first celebrity chef, Wolfgang Puck, and details his rise from poverty and an emotionally abusive childhood in Austria to achieve massive success after embracing capitalism in America. Using anecdotal interviews, re-enactments and archival photos and videos that bring Puck’s story vividly to life, WOLFGANG tells an excellent, inspirational tale of the American Dream in action, with almost no objectionable content.

Streaming on Disney+, the movie centers on the recollections of Puck, now 71, as he recalls his incredible rise from nothing to a present-day fortune of $120 million. His commentary is packed with hard-won wisdom that espouses hard work and positive risk-taking as the means to success in life, giving viewers a terrific primer in attaining their own dreams of success.

The movie opens with Puck paying a visit to his sister, who still lives in Austria. When he moved to America as a young man, he vowed to never return to his childhood home. The movie shows how he came to terms with his past and learned to overlook the negatives and attain his greatest success when he embraced his Austrian culinary heritage.

Puck recalls growing up in incredible hardship as an illegitimate child whose stepfather constantly derided him. Rather than being crushed, he vowed to prove his stepfather wrong and left home at 13 to become an assistant in a restaurant. With an instinctive drive to do his best, Puck quickly stood out and was promoted to much better positions quickly before initially leaving Austria for France.

Puck took his newfound knowledge of French cooking to America, where he became the top chef at a popular Los Angeles restaurant called Ma Maison. Low pay and a difference in cooking philosophies with the owner inspired him to break off and form his own restaurant: Spago.

It is at Spago that Puck was the first major chef to insist on fresh, garden-grown produce and invented both “California cuisine” and Asian fusion. This led to massive success as he became a television celebrity guest and built an empire of restaurants and food brands. Yet, despite all his wealth, he was a workaholic who was a distant husband and father, leading to a divorce.

WOLFGANG shows that it’s possible to have great worldly success and still feel empty inside, as Puck admits to lacking a sense of purpose. The movie never discusses his spirituality either way, but it’s clear that an embrace of Jesus Christ would give him true happiness and peace. However, he finally finds happiness in another marriage, where he’s a more present spouse and father and also finds his purpose in making others happy through his cuisine.

WOLFGANG isn’t a flashy documentary, but rather a fairly straightforward one. However, this approach gives the movie an intimacy that’s surprising and commendable, as Puck truly opens up to the camera and shares profound life moments, and the lessons he learned from them. WOLFGANG is an unabashed homage to capitalism and the American Dream, a refreshing change from most mainstream media, which frequently pushes a socialist, or left-leaning, agenda.

This is a movie with an intelligence level aimed for teenagers and adults, but it has no strong immoral or objectionable content to hinder younger children from watching it. The only marks against it is one use of OMG in vain, and non-graphic but sad discussions of Wolfgang’s emotionally abusive childhood and his divorce. WOLFGANG is highly commended viewing for media-wise consumers.