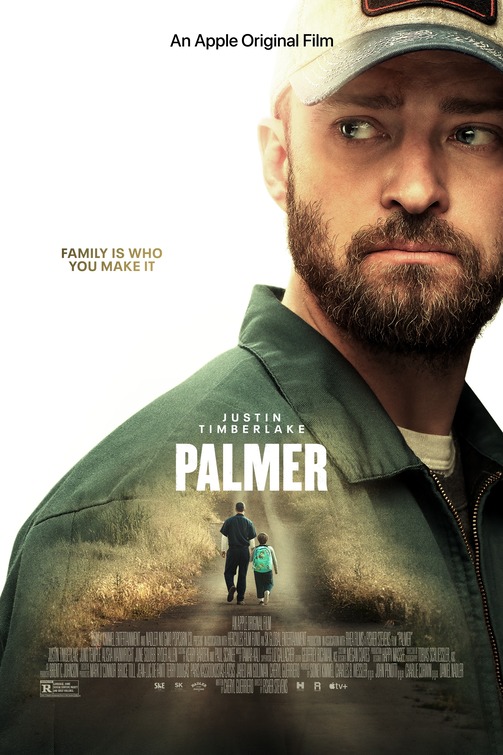 PALMER is a television movie streaming on Apple TV+. Justin Timberlake stars as Eddie Palmer, a convict released from prison who returns to his Louisiana hometown to live with the churchgoing grandmother who raised him. Eddie’s grandmother, Vivian, takes care of Sam, the little boy next door, whenever Sam’s troubled mother goes on a drug binge. Eddie has to take care of Sam when the woman disappears, and his grandmother dies. Problems occur because Sam loves to play with dolls and pretend to be a princess. Eddie learns his grandmother’s will gives her house to her church. Also, Sam’s mother, looking strung out on meth, returns.

PALMER tells an emotionally powerful, well-acted story. The bond between the ex-con going straight and the little boy is often touching. The movie has some positive Christian content. However, these positive references stop when the protagonist’s sweet Christian grandmother dies. Also, the movie’s marred by lots of strong foul language and other obscene content. Finally, PALMER promotes a strong, politically correct worldview. It celebrates transgender, cross-dressing lies where little boys are encouraged to act like girls.

(RoRo, PCPC, FRFR, HoHo, CC, B, LLL, VV, SS, NN, AA, DD, M):
Dominant Worldview and Other Worldview Content/Elements:
Strong Romantic, politically correct, feelings based worldview promoting antinomian acceptance and celebration of transgender, cross-dressing psychology and politics where boys are encouraged to act like girls, mitigated by some overt positive Christian contents including churchgoing, praying over a meal, older devout Christian is the most decent person in the movie, forgiveness occurs, and some moral elements such as compassion
Foul Language:
At least 66 obscenities (about slightly more than half are “f” words), 16 strong profanities, six light profanities
Violence:
Man repeatedly punches another man who mocks a little boy for being a sissy and playing with dolls, man hits wall next to another man several times to warn him, little boy hits another little boy once in church, boy comes home with bruised face from bullies, man grabs young bully by arm and warns him about bullying, man puts hands around woman’s throat and shoves boy across the room, another man enters and punches the bad man and sends him flying across the room, and mentions of beating a man with a baseball bat and going to prison for attempted murder
Sex:
A scene of depicted fornication, a shorter scene of depicted fornication and some implied fornication, plus movie accepts and even celebrates cross dressing (you can do whatever you want)
Nudity:
Brief rear female nudity in one scene, side view of woman’s breasts and upper male nudity
Alcohol Use:
Alcohol use and a man appears to be a little drunk in one scene
Smoking and/or Drug Use and Abuse:
Smoking and woman looks like she’s strung out on meth; and,
Miscellaneous Immorality:
Bullying of cross-dressing boy who plays with dolls, mother abandons her young boy for weeks at a time, and man starts to take little boy in a dysfunctional family environment away in a car but returns.

PALMER is a television movie streaming on Apple TV+ about a convict who gets released from prison, returns to his hometown to live with the churchgoing grandmother who raised him and strikes up a friendship with the strange little boy next door who’s become friends with his grandmother because the boy’s often abandoned by his troubled mother. PALMER tells an emotionally powerful, well-acted story, with some positive Christian content, but it’s marred by lots of strong lewd and obscene content and an exaggerated politically correct message about a little boy who identifies with being a princess.

Justin Timberlake stars as Eddie Palmer, who returns to his rural Louisiana hometown after serving 12 years in prison for attempted murder. He shows up on his grandmother, Vivian’s, doorstep. Vivian has his room all ready for him. Next to her house is a trailer, and Jim watches as a blonde woman, Shelly, sits out front with her young son, Sam. White they sit out front, Shelly’s boyfriend comes out of the trailer, tells Shelly he’ll be back in a couple days and drives away in his red truck. Vivian tells Eddie that Shelly is “nothing but trouble,” but she lets Shelly live in the trailer next door because Vivian is fond of Shelly’s son, Sam.

That first night, Eddie goes out drinking. He runs into old drinking buddies at his former hangout, including his friend, Cole, who works as a sheriff’s deputy. At the bar, he gets picked up by Shelly, and she takes him back to the trailer, into her bedroom.

The next day, Vivian gets Eddie to drive her and Shelly’s son, Sam, to her church. Two or so days later, Shelly’s boyfriend, Jerry, returns. Shelly takes off with him in his truck, leaving Sam behind. Vivian tells Eddie that Shelly has taken off “again,” so Sam will be staying with them. She says Eddie will have to sleep on the couch because Sam gets Eddie’s bed. However, Sam says he doesn’t mind the couch. That’s where he sleeps in the trailer.

Eddie discovers that Sam loves to play with dolls. Sam’s friend Emily, who happens to be Cole’s daughter, gives Sam all her castoff dolls. Sam’s also a rabid fan of the cartoon program, “Penelope the Flying Princess.” When Eddie tells Sam boys aren’t supposed to play with dolls, Sam replies, “I’m a boy, and I do.”

Eddie manages to get a job working as a janitor at Sam and Emily’s elementary school. Things seem to be going pretty well for Eddie.

One morning, however, Eddie wakes up to find his grandmother has died in her sleep. A funeral is held, but Shelly still hasn’t returned for Sam. Eddie takes Sam to the police station, where Cole tells him that Sam will have to go into the foster program. Eddie doesn’t have the heart to leave Sam there, so he takes Sam back home with him.

Eddie develops a strong concern for Sam as their relationship of child and caretaker develops. Sam comes to depend on Eddie while Eddie becomes Sam’s protector, especially from young and older bullies. Their strong bond is threatened when Eddie learns his grandmother’s will gives her house to her church, and when Sam’s mother, looking strung out on meth, finally returns.

PALMER tells an emotionally powerful, well-acted story, with some positive Christian content. The bond between the ex-con going straight and the little boy is often touching. Eventually, Eddie’s compassion for Sam is rewarded. However, the positive Christian references stop when the protagonist’s Christian grandmother dies. Also, the movie’s marred by lots of strong foul language and other obscene content. PALMER also has an exaggerated politically correct, antinomian message about a little boy who identifies with being a princess. When the little boy shows up dressed as a princess on Halloween in school, his teacher dresses in a man’s suit and moustache, pretending to be the school principal. You can pretend, or be and do, whatever you want, she tells the children, not just on Halloween but on any other day of the year.

The filmmakers lay this pro-homosexual, “gender-bending” leftist message on viewers a little too thick. For example, children can indeed become fixated on one TV program, one toy or one game. Many younger children, for instance, are fixated on the delightful PAW PATROL cartoons. However, these same children also will like some other TV programs a lot too. Thus, the little boy’s fixation in PALMER on playing with dolls and being a princess seems a bit one-dimensional and convenient, designed to make a controversial point about gender politics. The situation seems a little too pat and unbelievable.