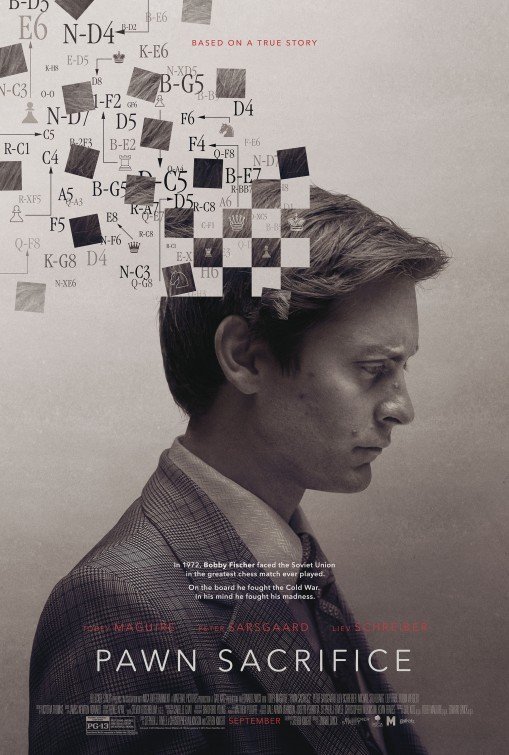 PAWN SACRIFICE is a drama about how troubled American chess champion Bobby Fischer beat Soviet Russia’s Boris Spassky in 1972, but lost his mind in the process. After a brief intro, it reverts to 1955 to chart Bobby’s rise as a child chess prodigy. As Bobby becomes a young man, a patriotic lawyer asks Bobby to manage his career. Bobby agrees, but managing the paranoid, anxious chess prodigy is easier said than done. After several setbacks, some of which are of Bobby’s own making, a 1972 championship match is arranged between Bobby and Spassky, the Soviet Union’s current world champ. The rest is history.

PAWN SACRIFICE is riveting. It captures the period’s mood without any leftist, politically correct messages. Sadly, Fischer became so paranoid he never defended his title. In fact, he succumbed to Anti-Semitic delusions, despite his Jewish background. The good news is that a Catholic priest helps Bobby win the title before they fell out over Fischer’s Anti-Semitism. PAWN SACRIFICE also has some anti-communist, patriotic content. There is some foul language and a bedroom scene, however, so caution is advised.

(BB, PP, ACAC, CC, Ab, Pa, Co, LL, V, S, A, D, M) Strong moral, patriotic, anti-communist worldview, with a Catholic priest as a positive, caring figure who tries to counsel a troubled young man but young man succumbs to Anti-Semitic conspiracy theories from a fascist, decides to lose his virginity and is unkind and paranoid at times, plus young man’s mother is a communist radical but he rejects her and hates Soviet Russia; eight obscenities (“s” and “h” words), one GD and one light OMG profanity; light violence when young man has a couple temper tantrums and flings objects in his room; implied fornication in one scene; upper male nudity; brief alcohol use; smoking; and, character succumbs to paranoia and is sometimes unkind and rude.

PAWN SACRIFICE is a drama about how troubled American chess champion Bobby Fischer beat Boris Spassky, the world champ from the Soviet Union, in 1972, but lost his mind in the process. PAWN SACRIFICE is a riveting drama about an event and a personality that captured the whole world’s attention, but there is some foul language and implied sexual immorality, so caution is advised.

The movie opens with Fischer alone in his room outside Iceland’s capitol city, where he’s extremely paranoid about the Russians spying on him during his famous 1972 match with Spassky. As Bobby tears up his room looking for listening devices or “bugs,” the movie flashes back to his childhood. In 1951, little Bobby Fischer’s alone in his room while his communist mother hosts a party with her radical friends. Bobby notices an FBI car outside their apartment in Brooklyn monitoring his mother and her friends. He goes to tell his mom, but she’s too involved with her friends.

The movie then shows how Bobby became interested in chess and grew estranged from his family, especially his mother along with her boyfriend. Bobby quickly becomes a chess prodigy. He even forces his mother to move out of the house because he needs absolute quiet to study chess, especially if he’s ever going to challenge the Russian communists, who provide their chess masters with modern accommodations, including limousines.

As Bobby becomes a young man, a patriotic lawyer approaches Bobby and asks to manage Bobby’s career. Bobby agrees, but managing the paranoid, anxious chess prodigy is easier said than done. After several setbacks, some of which are of Bobby’s own making, a championship match is arranged between Bobby and Boris Spassky, the Soviet Union’s current world champ. The rest, as they say, is history.

PAWN SACRIFICE is a fully captivating entertainment that seems to totally capture the personality of Bobby Fischer and the history swirling around him. It pretty much matches what a recent documentary had to say about Fischer’s rise to world champion, including the controversial events surrounding his famous match with Boris Spassky. Though he’s a little too short, Tobey Maguire is convincing as Fischer, and Liev Schreiber is convincing as Spassky. Their performances, and those of the other actors, are pretty entertaining.

The movie captures the political mood at the time without inserting any left-wing, politically correct messages or revisionist history. It also captures the letdown that Fischer obviously seemed to feel after he became world champion. After the match with Spassky, Fischer became so paranoid that he never defended his title. In fact, he eventually succumbed to Anti-Semitic delusions, even though he himself had a Jewish background. The good news is that a Catholic priest befriends and helps Bobby win the title, though they had a falling out as Fischer increasingly pursued Anti-Semitic conspiracy theories.

PAWN SACRIFICE has both Pro-Christian and anti-communist content as well as some patriotic content. There is some foul language, however. Also, Fischer has a brief affair with a young woman he meets. So, caution is advised.