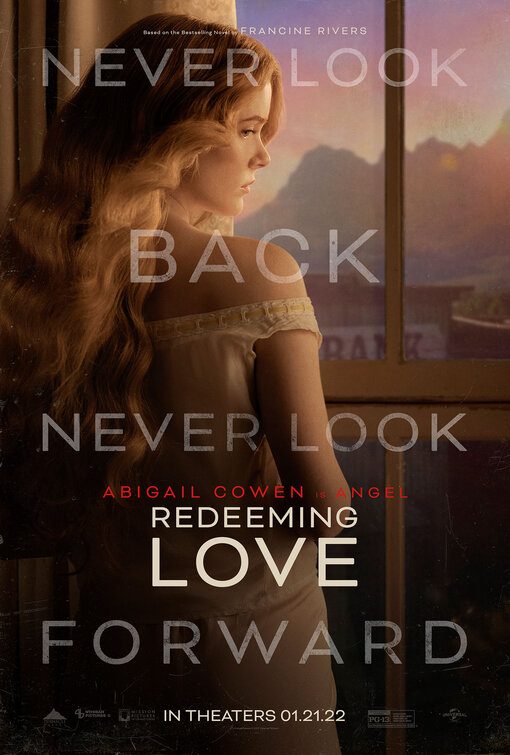 REDEEMING LOVE tells about a woman forced into prostitution at a young age, but rescued by a Christian man, who shows her true love. Angel grows up in prostitution and has been abused by every man she’s met. When Michael, a farmer, calls to God for a wife, he believes God tells him to make Angel his wife. One day, Angel is beaten. Michael hears God telling him about it and runs to her side. He pays off the brothel and takes Angel home. After Angel recovers, she runs from Michael. Will Angel ever trust Michael? Will she come to God?

REDEEMING LOVE is based on a book by Francine Rivers loosely based on the biblical Book of Hosea. The cinematography in REDEEMING LOVE is good with beautiful landscapes. The movie could have been edited to have the audience understand the issues rather than showing them. The movie has some powerful metaphors of true love in a committed married relationship. Despite this, audiences must sit through unpleasant scenes, including rape, abuse, prostitution, and child abuse. MOVIEGUIDE® advises extreme caution for REDEEMING LOVE.

(CC, L, VV, SS, NN, AA, D, M) :
Dominant Worldview and Other Worldview Content/Elements:
Strong Christian worldview overall incudes references to God, prayer and the Cross, plus woman rejects God but later accepts God and asks for forgiveness
Foul Language:
Six obscenities
Violence:
Strong violence includes noises of abuse, beating mentioned and scars left on woman, there’s a story about a woman destroying a house and hurting her mother, man tries to drown women to torture them, man pulls a knife and kills another man in front of a child, man kills himself with a shot to his head, woman slaps man in the face, man hits man, bar fight with men hitting each other and man kicks another man in the private parts, noises implying the rape of a child, a man is hung, women seen dead on a floor, woman is beaten, and her face is all swollen from the beating
Sex:
Depicted sex scene shown, implied fornication, multiple sex scenes shown, child prostitution, noises from a child being abused, it’s implied man sexually abuses his own child, and oral sex is implied with a brother-in-law
Nudity:
Upper female nudity though hair covering, man covers woman’s breast with his hand, upper male nudity
Alcohol Use:
Multiple scenes of drinking and drunkenness
Smoking and/or Drug Use and Abuse:
Smoking, but no drugs; and,
Miscellaneous Immorality:
Lying, deceit.

REDEEMING LOVE follows the story of a young woman who’s forced into prostitution at a young age but is rescued by a Christian man, who shows her what true love is. REDEEMING LOVE is based on a book by Francine Rivers, but MOVIEGUIDE® advises extreme caution due to lewd, suggestive content, child abuse and other very salacious themes.

When Angel was just a young girl, her father left her and her mother penniless and on the streets. Her mother fell into prostitution to pay the bills but dies in Angel’s arms while praying. From this, Angel rejects God, which is symbolized when Angel throws her mother’s cross necklace into the water. After this, Angel is sold to a man who keeps her as a child prostitute, at the young age of 8-years-old.

Fast forward years later. Angel is now the prized prostitute at the Palace in Paradise, California. Every day she’s subjected to sleeping with man after man after man. One day, she’s parading around the town and a young man, Michael Hosea, sees her and believes God tells him to make Angel his wife.

Michael is a farmer who has come into town to get supplies for his farm. He decides to pay for time with Angel, but just to talk. He tells her they can’t have intimate relations until they are married. Angel doesn’t believe Michael has the right intensions, because she’s never had a positive male figure in her life. In fact, every male she has come across has abused her, raped her or used her for money.

One day, Angel is being beaten senselessly. Michael hears God telling him about it, and he runs to her side. He pays off the women who runs the Brothel and takes Angel home with him.

After Angel makes a recovery, however, she tries to run away from Michael. Will Angel ever trust Michael and believe his intensions? Will she come back to faith in God?

The cinematography in REDEEMING LOVE is well done with beautiful landscapes. That said, the movie could have been cut down and edited to have the audience understand the heavy issues involved rather than actually showing them to viewers. Many of the actors felt flat and as if the characters didn’t have a lot of dimension, which usually a reflection of poor direction. Even so, due to the fan base of the book, this movie may gain some traction.

REDEEMING LOVE is based on the book by Francine Rivers and very loosely based on the Book of Hosea in the Hebrew Scriptures. The movie has some powerful metaphors of the true depiction of love as shown in a committed married relationship. Despite this, audiences must have to go through one heavy scene to the next, which includes rape, abuse, prostitution, child abuse, and child prostitution. MOVIEGUIDE® advises extreme caution for REDEEMING LOVE.