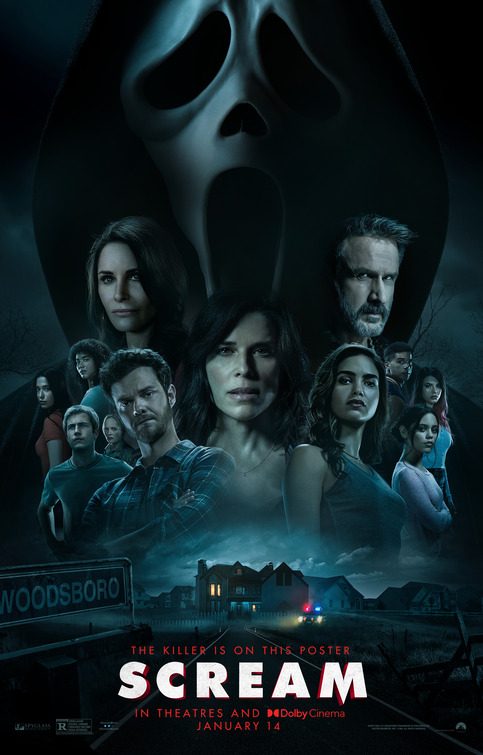 In SCREAM (2022), 25 years after a first killing spree and 11 years after the last spree, a new Ghostface killer targets a group of teenagers in a small town. Tara and her estranged sister, Sam, get the help of a former sheriff’s deputy, Dewey Riley, a survivor of three previous Ghostface killing sprees. As the new attacks continue and the bodies start to pile up, Dewey’s ex-wife, Gale, and their friend, Sidney, two other survivors, come to help. However, the killer and the killer’s accomplice turn out to be more cunning than even the veterans expected.

SCREAM (2022), the fifth SCREAM movie, follows the pattern set by the previous movies. It mixes the bloody violence of the slasher genre with satire, comedy and mystery. It continues to provide sarcastic, self-reflexive commentary on horror film cliches, especially mad killers and their victims. However, SCREAM (2022) is bloodier and more obscenity laced than the previous four movies. This makes the movie an even bigger threat to traumatize young viewers, dehumanize them, desensitize them, or entice a few to act out their own killing spree.

(PaPa, B, P, HoHo, LLL, VVV, S, AA, DD, MM):
Dominant Worldview and Other Worldview Content/Elements:
Strong pagan, mixed worldview combined with some moral elements where a mad killer or killers stalk and attack a group of teenagers, a sheriff and three adults who try to help the teenagers stop the killer(s), plus police are seen as good guys but not always effective, and homosexual elements in two scenes include passionate lesbian kissing between two teenager girls
Foul Language:
About 109 obscenities (including many “f” words), 12 strong profanities, four light profanities, and two obscene gestures
Violence:
Lots of extreme and bloody violence includes many stabbings resulting in bloody wounds or death, people engage in intense, often bloody life or death struggles against two killers brutally attacking them, one character is set on fire, people shot in the head, people stabbed in the neck or the head, killer stabs girl through the hand, etc.
Sex:
Depicted homosexual immorality when two teenage girls are interrupted kissing passionately alone in a room at a party after one of the girl earlier announced her intentions to another friend to make out with the girl later, and the other girl gives her a “come hither” look, and a teenage boy and girl are shown kissing passionately in close up during a party, and later the girl wants the boy to join her in an upstairs bedroom, but they never get there (not for lack of trying, however)
Nudity:
Brief upper male nudity
Alcohol Use:
Underage alcohol use at a party, and teenagers also visit a bar
Smoking and/or Drug Use and Abuse:
No smoking or illicit drugs, but one older teenage girl takes anti-psychotic drugs but still sees images of her dead father in a bloody T-shirt because he was a mad killer who was eventually killed; and,
Miscellaneous Immorality:
Lying and deceit by villains, teenagers are rather paganized.

In SCREAM (2022), two women and a man from three previous killing sprees return to Woodsboro to help some teenage friends, including two sisters related to one of the first previous Ghostface killers, stop a new Ghostface killer. The fifth SCREAM movie is bloodier and more obscenity-laced than the previous four, and the killer or killers turn out to be even more vicious, though the movie ultimately sides with the victims and potential victims.

The movie opens with a teenage girl, Tara, alone in her house in Woodsboro, while her mother is in London at a conference. A killer wearing a black robe and a Ghostface mask patterned after the famous painting “The Scream” attacks her, but Tara survives.

Living in another town, Tara’s estranged older sister, Samantha aka Sam, hears about the attack and rushes to Tara’s hospital bedside. Sam’s boyfriend, Richie, goes with her.

At the hospital, Sam and Richie meet Tara’s five teenage friends, which includes a twin sister and brother and the son of the town’s female sheriff. Since this is a Ghostface killer, Sam and Richie think the killer has an accomplice, and both killers must be two of Tara’s teenage friends. Or, could one of the killers be an older, thuggish teenage man who had a summer fling with one of the friends, a senior in high school?

When the older thug turns up stabbed to death, Sam and Richie decide to seek the help of former Deputy Dewey Riley, a survivor of the previous six Ghostface killers. Dewey is still pining over his ex-wife, Gale, another previous survivor. They separated when Gale moved to New York City to pursue her career, and Dewey didn’t fare well in the Big Apple. Eventually, Dewey lost his job as Deputy because of the self-doubt and recriminations that resulted from the divorce. Reluctantly, Dewey agrees to help Sam and Tara.

As the attacks continue and the bodies start to pile up, Gale returns to Woodsboro to cover the attacks for her TV station. Also, Sam reveals to Tara a secret she’s been hiding from her. Sam’s revelation makes her a suspect.

Eventually, Gale’s friend, Sidney, returns to Woodsboro to help Gale and Dewey stop the Ghostface killer or killers. However, Ghostface turns out to be more cunning than even they expected.

SCREAM (2022), the fifth SCREAM movie, follows the pattern set by the previous movies. It mixes the bloody violence of the slasher genre with satire, comedy and mystery. It also continues to provide sarcastic, self-reflexive commentary on horror film cliches, especially mad killers and their victims. A self-reflexive movie or literary work is one that explicitly reflects on its own process of creation. Here, a character claims they’re stuck in a horror “requel,” like a remake or a reinvention of the pattern established by the first two Ghostface killers. The characters in SCREAM (2022) also figure out that the killers must be someone who was upset by the last movie trying to capitalize on the Woodsboro killings, called STAB 3.

That said, SCREAM (2022) has a lot of violent twists in its climax that make the ending seem drawn out too much. Worse, however, the new SCREAM movie seems bloodier than the previous four. Also, it has a higher excessive amount of strong obscenities, including many “f” words and few strong profanities. Finally, in the third act, one of the main teenage female characters expresses a sexual interest in another minor female teenage at a party. Later, the two girls are found kissing passionately on a couch in a room. Another main female character wants one of the main male teenagers to join her in a bedroom, but the attempted rendezvous is interrupted.

Scores of thousands of scientific and psychological studies show that many young viewers will be traumatized, dehumanized and/or desensitized by such material and a few disturbed individuals will be inspired to create their own violent, bloody mayhem. Given that this SCREAM is bloodier than the first four movies makes SCREAM (2022) an even bigger toxic media threat to teenagers and families in the United States and around the world.