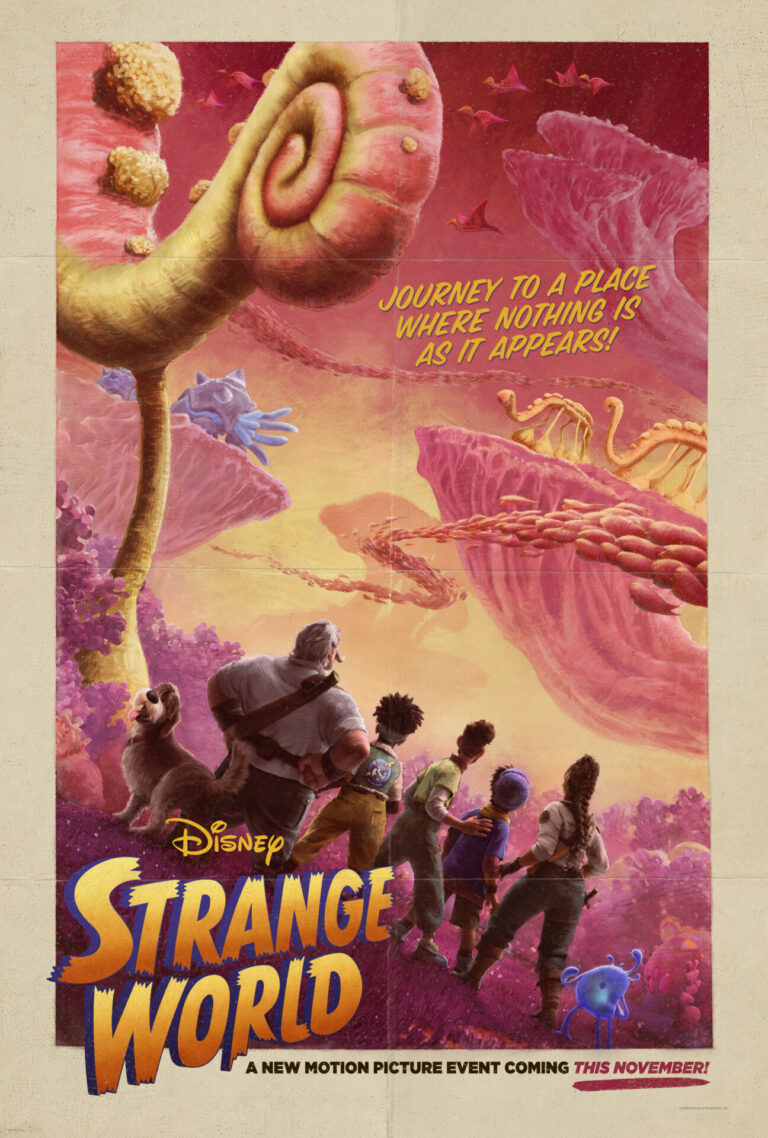 STRANGE WORLD is an animated action adventure from Disney. It follows three generations of explorers. Jaeger Clade, the grandfather, is obsessed with his legacy. He wants to be the first explorer with his son, Searcher, to reach the other side of the mountains surrounding their homeland, Avalonia. However, his father’s obsession causes them to part ways. Searcher returns home with a plant called pando that he discovered in the mountains. The plant is a technological breakthrough. When the pando crops start dying, Searcher and his family, including his son, are flung into a mission to save their home. As they travel through a strange new world beneath, they discover the truth about their family’s legacy.

STRANGE WORLD is beautifully animated, but it has a boring script and underdeveloped characters. Though it has some pro-family values that extol forgiveness, they’re spoiled by an unapologetic, politically correct homosexual agenda. For example, the teenage grandson flirts with another boy. STRANGE WORLD has a politically correct, unscientific attitude against “fossil fuels.” Also, the characters discover that their world rests on the shell of a giant tortoise.

(FRFR, BB, C, PCPC, EE, HoHo, V, S, A, MM):
Dominant Worldview and Other Worldview Content/Elements:
Strong false, Non-Christian worldview (the story features a large turtle with a family’s homeland on its back, which is reminiscent of the Hindu god Kurma, one of the incarnations of the Hindu god Vishnu, and the Iroquois creation myth), aside from that there are a few moral, redemptive elements about reconciliation, forgiveness and a good message about sacrificing our own wants and desires for the sake of family, but movie promotes a politically correct view against fossil fuels and in favor of male homosexuality
Foul Language:
No obscene or profane language, a few uses of the word “heck”
Violence:
Although it is a children’s animated movie, the action scenes are quite intense, characters battle tentacled face monsters that could frighten younger children, some of the monsters are burned with a flamethrower or stabbed with knives
Sex:
No sex, but, Searcher’s teenage son, Ethan, is trying to date another teenage boy, there are several scenes where Ethan flirts with the other boy or fantasizes about flirting with the boy, Ethan refers to the boy in one scene as his lover, and the movie makes it clear both teenage boys have lustful desires toward one another
Nudity:
No nudity
Alcohol Use:
No explicit alcohol, but in one scene Jaeger and his son have a “drink” that’s never named, but adults will know it is made to represent beer
Smoking and/or Drug Use and Abuse:
No smoking or drugs; and,
Miscellaneous Immorality:
Searcher Clade is the only male character to apologize for his actions, despite his father and his son both wronging him as well.

Jaeger Clade is the greatest explorer to live. He’s made it his mission to explore beyond the mountains that surround him and the people of his homeland, Avalonia. Jaeger has a son, Searcher, who he trains to become an explorer like him.

The duo, along with a team of other explorers, embarks on an expedition through the mountains. The terrain is dangerous, though. Searcher believes they should turn back, but Jaeger continues, undaunted. However, when Searcher stumbles across a unique and never-before-seen plant, he and the rest of the team believe the discovery is a sign to turn home and celebrate. Obsessed with his exploration, Jaeger angrily leaves the party, and his son, behind.

Searcher returns home and discovers that the plant holds a special energy which brings electricity, flying machines and other technology to his home city. Searcher, along with his wife and son, Ethan, own a farm which distributes the special plants across their homeland.

A statue of Searcher is erected in the city square right next to his father’s, and Searcher is excited to continue his legacy of farming through his son, Ethan. However, when the plants begin to die, Searcher is called on to find the source of a disease which seems to be killing all their crops.

Although he insists on going alone, his wife and son end up on the mission with him, as the city’s biggest ship, “The Venture” travels deep into the earth’s core. After creatures attack their ship, they end up crash landing in a new land beneath their own, full of unique creatures, plants and lifeforms.

Searcher is separated from his family, and to his surprise, runs into his father, Jaeger. For 25 years, Jaegar survived in the new world and tried to continue his exploration to the other side of the mountain. However, without a flying machine, he was stopped short at the shore of an acid ocean.

Will Searcher and Jaeger be able to work as a team despite their past arguments and hurts? Or will Searcher’s goal to not become like his father backfire and ruin his relationship with his own son?

STRANGE WORLD has beautiful animation and a world that’s clearly inspired by Jules Verne’s JOURNEY TO THE CENTER OF THE EARTH. However, these similarities do a disservice to the movie, since the only thing truly surprising about the movie is its boring script and contrived characters that serve a political social agenda rather than a heartfelt, compelling story.

The world around Searcher, Jaeger and Ethan is the most compelling character, but even that is marred by a vision of a giant tortoise with an island/world on its shell. Thus, the movie has a false Non-Christian worldview similar to the Iroquois Indian creation myth or an incarnation of the Hindu god Vishnu. The nod to false religion reflects the movie’s lack of direction, which is also present in the dull script and shallow character arcs. Finally, STRAMGE WORLD has more to say about the made-up dangers of fossil fuels and the LGBT agenda than it does about the Clades, Avalonia or themes with any substance.

While the visuals will intrigue younger minds for a time, STRANGE WORLD has little ground to stand on and topples due to a wobbly worldview, lack of good characters, and the weight of its progressive agenda. Movieguide® advises extreme caution for younger audiences due to its worldview and ideological misfires, false religious elements, and some action sequences and monsters that could scare younger children.

To its credit, the movie presents a strong marriage between Searcher and his wife, Meridian, who both want nothing more than to protect and preserve their family. This, along with a reconciliation between Jaeger and Searcher, are commendable. However, these few bright spots in STRANGE WORLD are marred by the problem that the movie is too concerned with its political agenda to care about its characters or its audience.

The visuals in STRANGE WORLD will intrigue viewers for a short time, but otherwise STRANGE WORLD has little solid ground to stand on. The movie’s politically correct environmentalist, homosexual content is unacceptable. Also, some action sequences and monsters could scare younger children.