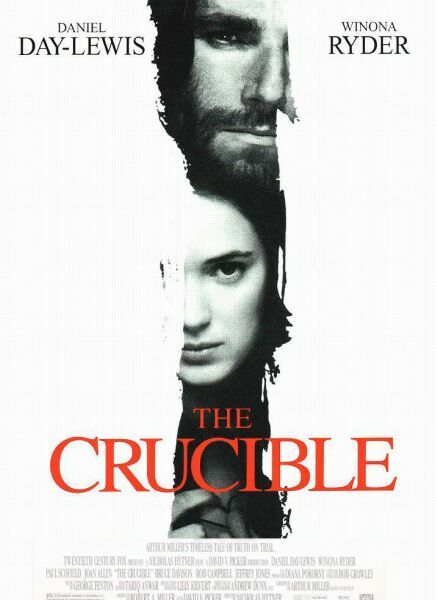 THE CRUCIBLE, written by Arthur Miller, purportedly documents the snowballing affects of the Salem Witch trials and suggests that the foundation of the fiasco was not necessarily witchcraft, but a vengeful woman who wishes the wife of her adulterous lover dead. Containing depicted occultic practices and showing Christian leaders to be stupid and unreasonable, it damages the cause of Christ, while trying make a statement against zealous hypocrites.

THE CRUCIBLE, written by Arthur Miller, documents the snowballing affects of the Salem Witch trials. Winona Ryder plays Abigail Williams, a young woman who places hexes on women. Abigail places a hex on Elizabeth Proctor because she wants John Proctor as her lover. The hexing is foiled when the Rev. Parris catches the girls and asks for judges to quench the rise of witchcraft in Salem. Soon, Abigail starts accusing many innocent people of being witches, even though they are not. Abigail is motivated by anger against a rigid society, but the true object of her scorn is Mrs. Elizabeth Proctor. With unreasonable conjecture and accusations becoming more and more accepted as truth, Judge Hathorne asks that John Proctor and his wife Elizabeth either admit to having worked with the Devil, or face the gallows.

In the CRUCIBLE, we see that the accusers are found innocent and the innocent are found accused. This is a painful movie to watch. While it does recognize God, sin, Satan, and restitution, it also features many Christians who are acting out of fear and panic rather than righteous judgment or love. Containing occultic practices and showing Christian leaders to be stupid and unreasonable, it damages the cause of Christ, while trying make a statement against zealous hypocrites.