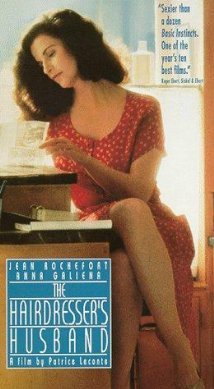 THE HAIRDRESSER'S HUSBAND is a skillful but pessimistic French parable about a blissful but shallow marriage. A decade of passionate self-absorption between a hairdresser and her husband ends in tragedy. Surprisingly, most of this is interesting and engaging, but something awful is bound to happen and does.

In the French film, THE HAIRDRESSER’S HUSBAND, the boy Antoine develops an infatuation with a hairdresser and announces to his parents that he will marry her. Unfortunately, she commits suicide. Years later, Antoine discovers a beautiful hairdresser named Mathilda. After a haircut, he makes an impulsive proposal of marriage, and she surprises him with an impulsive acceptance. Their lives become blissfully entwined and hopelessly constricted. For ten years, the shop and its apartment is their world. They live for closing time when they devour one another after locking the door. There are no hobbies, no children, no church, no God. Eventually, Mathilda kills herself after making love to her husband, overwhelmed by a dread that Antoine will lose interest in her.

Writer/director Patrice Leconte manages to make this self-absorbed couple very engaging. Alas, this little parable wastes its considerable talents by coming to a bleak conclusion, instead of allowing the likable couple to grow from shallow passion to a mature, satisfying relationship. If no man is an island, no couple can be either, and without friendships, family and God, even the most ecstatic relationship is eventually doomed.

Rating: Not submitted to MPAA rating