"Use the Gifts God Gives You" 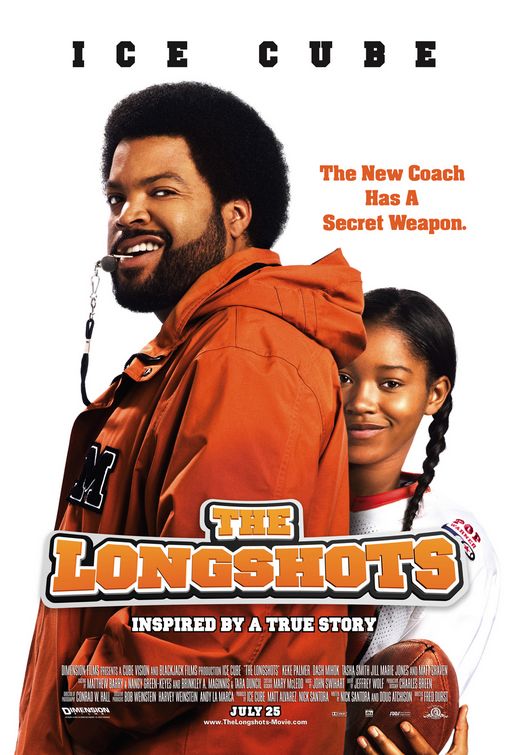 THE LONGSHOTS is an inspiring sports drama with plenty of comedy. It stars Ice Cube as Curtis Plummer, a down and out former football star who finds himself babysitting his teenage niece, Jasmine. They have little in common, but Curtis discovers that Jasmine has a good arm on her. He convinces her to learn how to be a quarterback to pass the time together. Jasmine turns out to be a football phenom. She makes the local Pop Warner team full of boys from her middle school. The white coach is reluctant to put her in a game, however, but his team is not doing very well. He finally plays Jasmine, and the team starts winning.

THE LONGSHOTS is another in a long line of well-made, inspiring and relatively family-friendly sports movies from Hollywood. This one is not only inspiring and exciting, it also has plenty of funny moments. It is certainly one of the most entertaining, best acted and most heartfelt movies of the year. THE LONGSHOTS has a strong Christian worldview with positive moral elements, but it contains some foul language and minor elements requiring caution for older children.

(CC, BB, PP, FR, Fe, LL, V, A, M) Strong Christian worldview with strong moral elements (including pastor gives two pep talks to the townspeople, one of them in a sermon, and invites a man back to church) and a positive view of American innovation and strength of character, marred by some foul language and a couple antinomian, biblically aberrant aspects (the foul language reflects a possible antinomian attitude and a church sign says, “God helps those who help themselves,” which is not biblical), plus a light feminist tone because story is about a young teenage girl who plays football with boys; 11 obscenities (including pastor uses a crude reference to make a point), two strong profanities and three light profanities, plus boy playing center on a football team uses a comical euphemism to complain about a girl quarterback having to put her hands under his groin to take the ball from him and mean middle school students present a shy student with a toilet plunger to suggest she clean the school toilets; some light football violence; no sex; no nudity; some beer drinking; no smoking; and, heroine’s father is irresponsible but her uncle steps up to the plate, mean students mock a shy student but the leader eventually apologizes, people break a window and run away, uncle tells niece to lie to her mother about him teaching her football but they tell the truth when girl seems good enough to try out for football team.

THE LONGSHOTS is another in a long line of well-made, inspiring and relatively family-friendly sports movies from Hollywood. This one is not only inspiring and exciting, it also has plenty of funny moments. It is certainly one of the most entertaining, best acted and most heartfelt movies of the year.

Based loosely on a true story, THE LONGSHOTS stars rap innovator and actor Ice Cube as Curtis Plummer, a former high school football star who now is unemployed in the down and out industrial town of Minden, Illinois. Curtis has been unemployed since the factory closed several years ago. He is also still depressed about his mother’s death two years before.

One day, his brother’s ex-wife asks Curtis to babysit her shy teenage daughter, Jasmine, after school because of the mom’s new hours at the diner where she works. Curtis is reluctant, but it’s the only job he can get at the moment.

At first, Curtis and Jasmine don’t get along. Jasmine, who has been terribly hurt by her father’s abandonment of the family, doesn’t think she needs a babysitter while Curtis feels out of place being a babysitter to a shy girl. Then, however, Curtis discovers that Jasmine has a pretty good arm on her. He thinks she can learn how to be a quarterback.

In the beginning, Jasmine just thinks of throwing the football with Curtis as something to pass the time, but then Curtis convinces her to try out for the local Pop Warner Football team full of boys from her middle school. Jasmine amazes everyone with her talent and the skills she’s learned from her uncle, and makes the team. The coach is reluctant to put her in a game, but his team is not doing very well. He finally puts Jasmine in the game, and the team starts winning.

Running at a sleek 95 minutes, THE LONGSHOTS gets right to the point of the story. The script fills out the main storyline with lots of supporting points and side characters that fit in perfectly with the main themes. And, it starts off with lots of humor. Finally, as the story goes along, the actors and the script pull the viewer in with plenty of heartfelt, exciting moments that are truly inspiring.

This is definitely one of Ice Cube’s best performances, if not his best one to date. Despite his grumpiness, he makes Curtis someone with whom the viewer can sympathize. Keke Palmer, as Jasmine, continues to be a revelation. She proves in THE LONGSHOTS that her excellent performance in AKEELAH AND THE BEE was not a fluke.

Although THE LONGSHOTS is not a Gospel-oriented movie but is a movie focused on a football team, it is clear that, with the factory gone, the church is now the main focus of the town. The preacher inspires the townspeople with two pep talks, and, when it comes time to get money to help the team go to the Pop Warner Super Bowl in Miami, the church is the place where the donations are collected.

Thus, THE LONGSHOTS has a strong Christian worldview that makes strong moral points about self-respect, hard work and using the gifts God has given you. In fact, in his first pep talk, the preacher actually tells the congregation one Sunday that Jesus gave them a mind and a heart, so they should use them. And, that’s exactly what Curtis and Jasmine do to improve their lives.

This shows that there’s a deeper, very profound message to this little sports movie.

That said, it must be sadly noted that THE LONGSHOTS does contain some foul language, including two strong profanities (see our CONTENT section for details). There’s an antinomian, or lawless, aspect to the use of foul language. Although obscenities and profanities are “just words,” words do mean things. In fact, they can hurt people’s feelings and upset the purity of the innocent. Tolerance of foul language can support an antinomian worldview, which falsely says that Christians don’t need to obey all of God’s moral principles after they get saved.

Another problematic aspect to the movie is Jasmine’s relationship with her father. Her father returns for the last playoff game that might send Jasmine’s team to the Pop Warner Super Bowl in Miami, but he shows later on that he really doesn’t care about her. This negative aspect is redeemed by a shot showing the white coach sharing a positive moment with his son on the team and by the uncle’s obvious support for his niece. In the Hebrew Scriptures, when a child’s father is absent, the uncle often is the person that becomes the father figure. This is what happens in THE LONGSHOTS.

Because of the foul language, MOVIEGUIDE® recommends caution for older children.

Reportedly, the real Jasmine Plummer is now playing girls basketball. She still likes football but hopes one day to play for the WNBA if she can.

Rent or Buy THE LONGSHOTS: