"Engaging Heroes, But Too Much Foul Language and Violence" 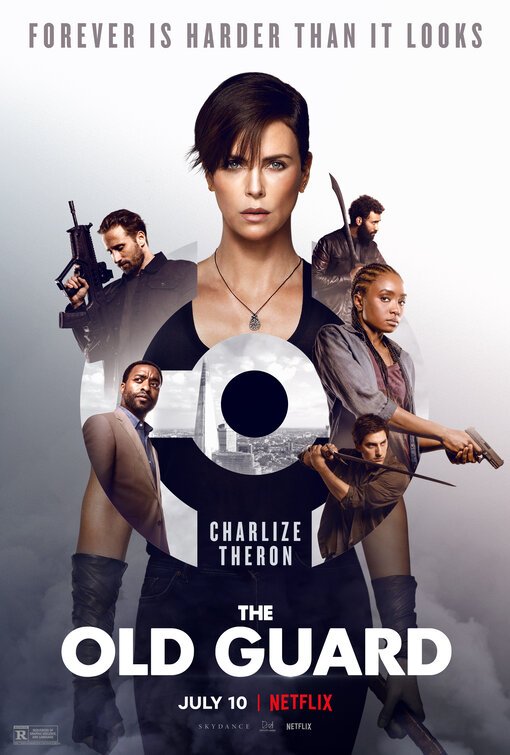 THE OLD GUARD is one of Netflix’s more engaging original movies. The characters have compelling backstories. Also, the movie has a strong moral worldview with positive Christian elements. One of the good guys is a Christian who affirms her belief in God, even when someone says otherwise. Also, one character’s jaded attitude causes her to lose faith in humanity, but the Christian character seems to give her hope. MOVIEGUIDE® advises extreme caution for THE OLD GUARD because of lots of foul language, two homosexual characters and intense, bloody action violence.

(BB, CC, Ho, H, O, LLL, VVV, S, N, A, D, M):
Dominant Worldview and Other Worldview Content/Elements:
Strong moral worldview with an emphasis on helping others who can’t help themselves, never leaving a solider behind and enforcing consequences for bad behavior, with some Christian elements where one good guy declares that her God exists even when someone tries to convince her otherwise, and she also wears a cross around her neck, and a church is depicted, but it gets blown up, and characters drink beer inside, plus a homosexual couple kisses on the mouth and talk about their “love” for one another, there’s a light humanist perspective from a character who declares there isn’t a God to a Christian, but it’s because she’s been jaded by her past experiences, and the Christian character seems to give her hope, and good guys have the same dream that seems to foretell events, but the movie doesn’t explain how that can happen
Foul Language:
About 30 obscenities (variety of “h” words, “s” words, “f” words,) and three profanities (one Jesus and two other lighter profanities)
Violence:
Very strong violence, and strong violence with some blood includes shootings, hand to hand combat, wounds shown, woman gets her neck sliced open, but her body heals itself, characters fall from a building onto a parked car and shatter glass and get injured in the process, criminals hang from nooses, characters almost get burnt at the stake, and one woman gets put into an iron casket and thrown into the ocean to die
Sex:
No explicit sex scenes but a homosexual couple kisses on the lips and express “love” for one another
Nudity:
Upper male nudity, nude statue shown
Alcohol Use:
Some alcohol use includes character spikes some coffee and a scene in a bar
Smoking and/or Drug Use and Abuse:
No smoking, but a drug runner depicted, but the good characters use him as a means of transport, not because they support his line of work; and,
Miscellaneous Immorality:
Greed, pride, lying, and a character places a bet but the stakes aren’t high.

Netflix’s new action thriller, THE OLD GUARD, follows a rogue group of soldiers who help other people and can self-heal from any injury, which makes them able to live much longer than the average human but also makes them a target for bad guys. THE OLD GUARD has a strong moral worldview with a positive Christian character who affirms her faith in God, but MOVIEGUIDE® advises extreme caution because of lots of strong foul language, two homosexual characters and some intense, bloody action violence.

THE OLD GUARD begins in Morocco. A female named Andy and her longtime friend, Booker, and two other friends of theirs, Nicky and Joe, seem thick as thieves. A gentleman named Copley hosts a meeting with Booker and Andy to ask for their help. Apparently, there’s a hostage situation in Sudan that requires their expertise. Meanwhile, Nicky and Joe listen to the conversation under Andy’s instructions. The foursome decide it’s best to go help the hostages in need and travel to Sudan.

However, they realize the hostage situation is a setup, and they end up very wounded (in fact they should be dead), but after a few minutes, they hop back up again as if nothing has happened. Andy knows they need to keep their guard up again. The four soldiers, though, keep having dreams about someone whom they don’t know. In their dreams, it looks as if she’s in danger.

Cut to Nile, an Army solider in a combat mission. Things don’t go the way she’d expect, and her throat gets cut open. After she gets some medical attention, it appears as though Nile is good as new, and there’s no scar to mark the knife wound. Andy and her team get to Nile’s location and take her with them, but she’s confused as to why she needs to leave her unit.

Here, the audience finally gets some insight.

Andy tells Nile she’s not like everyone else. In fact, neither are her band of solider misfits. They all possess a rare ability that allows them to self-heal after injury. This ability makes them able to live for eons longer than the average person. Nile is resistant to Andy’s insight at first, insisting that her family is the only thing that matters. Andy says she has a new family now, her and the team.

The audience learns that Copely is working with a man named Merrick who wants to uncover the secret to Andy and her team’s healing abilities. However, Merrick is very nervous that one of his competitors will beat them to the discovery, which is why he sends men with weapons to take down Andy’s team while they rest just outside of Paris, France.

After some intense fighting, Nicky and Joe are captured by Merrick’s team. Andy, Booker and Nile escape but soon come into contact with Copely. Apparently, Copely is a fan of the good that Andy and her team have done across their many years on the face of the Earth. Instead of using their self-healing abilities for their own benefit, they’ve helped people whenever they could. However, in a turn of events, Booker is a part of the scheme to take Andy and the team to Merrick.

Can the team survive Booker’s betrayal, and Merrick’s plans for them?

THE OLD GUARD is one of Netflix’s more engaging original movies. The characters in THE OLD GUARD have compelling backstories that make the script all the more appealing. Also, filmmakers perfectly set up the movie for a sequel. THE OLD GUARD is definitely high-quality. Also, the soundtrack pairs wells with the onscreen action.

THE OLD GUARD has a strong moral worldview with some positive Christian elements where one of the good guys wears a crucifix and declares there is a God and that her God is alive, even when someone says otherwise. Also, another character has a jaded attitude that causes her to lose faith in humanity, but the Christian character seems to give her hope. There’s one homosexual couple who embraces in the face of hard times. MOVIEGUIDE® advises extreme caution for THE OLD GUARD because of this, as well as lots of foul language and some intense bloody action violence.