"Take a Trip to the Golden Age of Television" 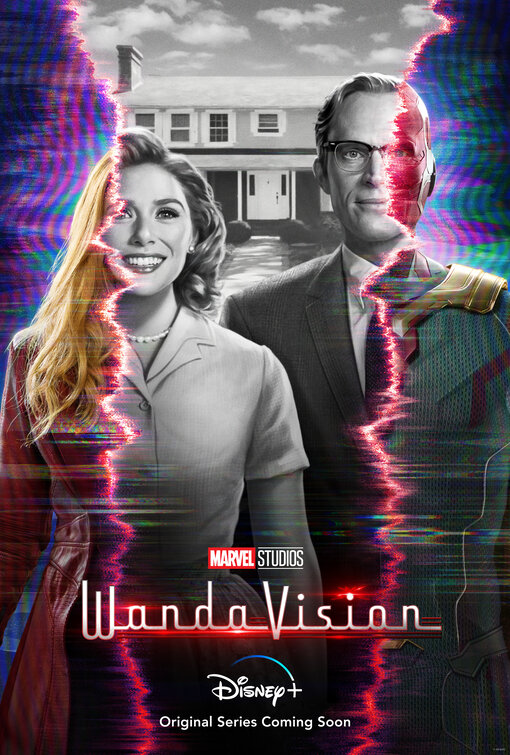 In the first episode of WANDAVISION on Disney+, Wanda and Vision, two Marvel superheroes, get married and try to settle in an old fashioned small town in America. Wanda and Vision don’t seem to know why they do what they do or where they are. They don’t pay it too much attention, though. They have other concerns on their plates. The pair see their wall calendar has a heart on it for today. Wanda thinks it might be their anniversary. However, at work, Vision finds out that his boss, Mr. Hart, is bringing his wife over for dinner.

Played like a 1950s TV sitcom, the first episode of WANDAVISION is funny, but confusing. Viewers will wonder where the series is going. The laugh track is annoying. The episode seems like a politically correct parody of 1950s America, or the way it was depicted on television. However, the episode seems to extol marriage, friendship and the need to work to support one’s family. MOVIEGUIDE® advises caution for older children for Wanda’s magical superpowers and some light innuendo in the first episode of WANDAVISION.

(Ro, B, PC, OO, V, S, A, M):
Dominant Worldview and Other Worldview Content/Elements:
Mixed Romantic, moral worldview, with a light politically correct subtext, seems to parody 1950s America, or the way it was depicted on television, but the episode also seems to extol marriage, friendship and the need to work to make an honest living for one’s family, plus episode has some strong magical elements as the wife in the program has superpowers similar to the witch character in the old TV series BEWITCHED
Foul Language:
No foul language
Violence:
Light violence includes a man chokes on his dinner but winds up unharmed, android with superpowers materializes himself through a door but forgets to materialize his wife through the door and she falls on the doorstep on her rear end, and a floating plate accidentally breaks over an android’s hard head, but his wife uses her magical, genetically enhanced superpowers to piece it back together
Sex:
Some light sexual innuendo where wife dresses up in a nightgown to celebrate the couple’s anniversary when the husband comes home, and two women discuss “seduction techniques” for their husbands such as stumbling so that their husbands can catch them
Nudity:
No nudity
Alcohol Use:
Mention of beer, women drink martinis as they chat, wine with dinner
Smoking and/or Drug Use and Abuse:
No smoking or drugs; and,
Miscellaneous Immorality:
A housewife makes some jokes about her husband’s affections.

Marvel’s WANDAVISION is the premiere series event on Disney+ based on the Marvel characters Vision and Wanda Maximov, aka “the Scarlet Witch,” who get married and try to make a home in an old fashioned small town in America. Filmed like a 1950s TV sitcom, the first episode of WANDAVISION is funny and well produced, but confusing and has a mixed worldview with light positive and negative elements.

Episode 1 begins with Wanda and Vision in wedding attire. After arriving in their “Just Married” car, the newlyweds cross the threshold to their 1950s-style home in black and white picture and appear to be as happy as clams.

One morning, Vision and Wanda see that today’s date on their kitchen calendar has a heart on it, but they can’t seem to recall why it’s there in the first place. In fact, Wanda and Vision can’t recall much of anything about their previous lives.

Vision goes to work and chats with a co-worker who says that their work productivity has gone up 300% since he’s been there. Fans of Marvel know this is because he’s not human but rather an android. Back at home, Wanda welcomes her neighbor, Agnes, into her home, and the two chat about their husbands as Wanda supposes that the heart on the calendar must mean it’s their anniversary.

Agnes and Wanda briefly discuss how to celebrate an anniversary, with all the 1950s code-oriented innuendo possible. Still at work, Vision meets his boss, Mr. Hart, who asks if Vision is still on for dinner tonight with their wives. That’s what the heart on the calendar actually means.

When Vision returns home, Wanda is in a nightgown ready to romance him for what she assumes is their anniversary. Of course, the Harts arrive, and Wanda has to use her superpowers to prepare a dinner she’s not ready to make.

Played like a 1950s TV sitcom, the first episode of WANDAVISION is enjoyable, but confusing. Viewers will wonder where the series is going. The second episode gives viewers a slight indication that something else is happening, but until the series reveals more about Wanda and Vision’s situation, viewers will be in the dark. That said, the first episode’s production quality is top-notch. Also, Elizabeth Olsen and Paul Bettany as Wanda and Vision are a great match in this new take on their romance from Marvel movies like CAPTAIN AMERICA: CIVIL WAR and AVENGERS: INFINITY WAR. The laugh track is annoying, however.

The first episode of WANDAVISION has mixed Romantic, moral elements. The episode plays like a parody of 1950s America, or the way it was depicted on television. However, the episode also seems to extol marriage, friendship and the need to work to make an honest living for one’s family. Wanda’s superpowers in WANDAVISION seem similar to the wife’s powers of witchcraft on the classic TV show BEWITCHED. Recent Marvel movies showed that Wanda’s superpowers were genetically created by the evil organization called Hydra. In the original comic books, however, Wanda was first considered a mutant from the X-Men comics, who was born on a mystical mountain that also gave her the power to do magic. Much later, she actually was shown to have been genetically modified by a powerful scientist who uses advanced evolution science to transform people and animals. Whatever the case, however, Marvel Comics always integrates Wanda’s superpowers with actual witchcraft. So far in Disney’s Marvel stories, though, Wanda’s superpowers are science-based.

MOVIEGUIDE® advises caution for older children for Wanda’s magical superpowers and some light innuendo in the first episode of WANDAVISION.