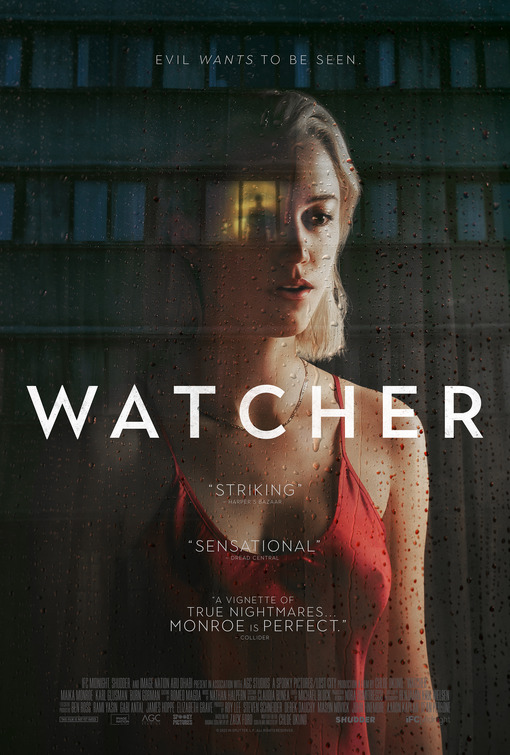 WATCHER follows a married couple named Julia and Francis after they move into an apartment in Bucharest. Francis is comfortable in their new surroundings, but Julia struggles to feel at home. Her discomfort turns to paranoia when she starts to believe a man in a neighboring apartment watches her through the window. After Julia learns of a serial killer who decapitated a woman in their apartment complex, she’s convinced her stalker’s to blame. So, she decides to keep tabs on him instead of the other way around. Will Julia’s paranoia save her life or ruin her marriage and turn everyone into her enemy?

For most of its running time, WATCHER achieves some stellar suspenseful moments, carried by the performance of Maika Monroe as Julia. It creates a suspenseful atmosphere that keeps the viewer as tense as Julia. The movie offers homages to older suspense thrillers. However, the unique story is eventually marred when it turns into a standard, ultraviolent slasher movie, with some extreme, bloody violence. WATCHER also has some strong foul language, lewd content and brief nudity. So, MOVIEGUIDE® advises extreme caution.

(B, H, LL, VVV, SS, NN, A, D, M):
Dominant Worldview and Other Worldview Content/Elements:
Lacks any strong worldview, slight moral worldview in the form of a supportive neighbor
Foul Language:
Eight “f” words, several “s” words, one light profanity
Violence:
While most of the movie relies on classic atmospheric suspense, toward the end there are intense and bloody scenes of violence such as a person’s throat is cut with lots of blood shown, a woman is decapitated, a character is shot twice, and there is a brief mention of rape and murders that the serial killer has performed
Sex:
A married couple has marital relations from afar
Nudity:
Brief nudity as a couple has sex (but it is shot from a distance and isn’t shown in detail), characters work at a strip club, partial upper female nudity is shown, and a woman is seen in the shower from the shoulders up Alcohol Use/Abuse: Alcohol is used at dinner, bars and at home
Smoking and/or Drug Use and Abuse:
Character smokes cigarettes when stressed; and,
Miscellaneous Immorality:
Stalking, paranoia.

WATCHER is a suspense thriller about an American woman who believes that a serial killer is stalking her in the new Bucharest apartment where she and her husband are living.

Julia and her husband, Francis, decide to move to Bucharest and buy an apartment. They’re hopeful about their new lives, but Julia becomes less excited when she thinks a man is watching her through the window from a neighboring apartment.

At first, Julia tries to ignore the odd behavior but begins to notice the figure continues to watch her in her apartment. After Julia starts to suspect that he follows her around Bucharest during the day, she confides in her next-door neighbor, Irina. Irina is by far the most supportive person in Julia’s life, as Francis struggles to believe his wife’s story about the stalker.

Julia’s paranoia escalates after an alleged serial killer decapitates a woman. Naturally, Julia believes that the stalker and the serial killer could be the same person. So, she decides to keep tabs on him instead of the other way around. Will Julia’s paranoia be her greatest asset or lead to her demise?

WATCHER is to be commended for its unique approach to the suspense thriller genre. At its best, it pays homage to Alfred Hitchcock and other classic horror directors and creates a suspenseful atmosphere that keeps the viewer as tense as Julia. Sadly, though, this uniqueness does not last as the movie turns into a normal, bloody slasher movie.

For most of the movie, WATCHER achieves some stellar moments of suspense, carried by the excellent performance of Maika Monroe as Julia. The movie offers homages to older suspense thrillers, but the unique story eventually is marred when it turns into a standard, ultraviolent slasher movie with some extreme, bloody violence. WATCHER also has some strong foul language, lewd content and brief nudity. So, MOVIEGUIDE® advises extreme caution.