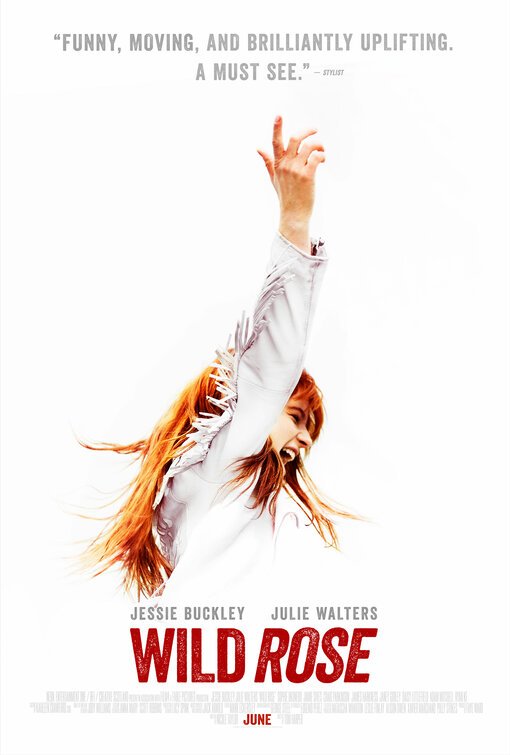 Set in Glasgow, Scotland, WILD ROSE follows a young woman, Rose-Lynn, after she gets out of jail after being there for the past year. The time behind bars has made Rose-Lynn more determined to follow her lifelong dream of going to Nashville, Tennessee and becoming a country singer. Nashville is a long way from Glasgow, but Rose-Lynn won’t let anything get in her way, even if it means leaving her two children with their grandmother while she pursues her dream. Rose-Lynn has to evaluate her priorities and figure out what it is that’s important to her.

WILD ROSE is full of a passion for music and heart. There’s no moment when viewers won’t feel entertained. However, WILD ROSE has a strong Non-Christian, Romantic worldview with lots of foul language, a bedroom scene and other immoral content. Rose-Lynn has made many mistakes in her life, but she’s trying to fix them in all the wrong ways. She’s clearly a negligent mother who shirks responsibility until the very end. WILD ROSE also has lots of strong foul language that media-wise moviegoers will find objectionable.

(RoRoRo, B, LLL, V, SS, N, AA, DD, MMM):
Dominant Worldview and Other Worldview Content/Elements:
Very strong Romantic worldview throughout movie as young woman pursues her own personal dreams of being a country singer above anything else, even the wellbeing of her own children, her mother is the only voice of reason as she tells her that she has her priorities mixed up but still watches her two children for her when she needs to be gone for music and ends up helping her pursue her dreams after she feels that her daughter has lost her hope, young woman lies and uses the good graces of other people in order to go after her chosen career path, there is no mention of God except in expletives, and there is little to no moral compass guiding most of the characters, plus, though young woman finally sees she needs to be more responsible, her change of heart seems to come too late
Foul Language:
At least, 45 obscenities (including about 33 “f” words) and several profanities, including a couple strong ones
Violence:
Mild and brief amount of violence as the main character lashes out at her old bar manager, punching and tackling him to the ground, she then walks outside and throws a beer bottle at the ground, which shatters it
Sex:
Depicted fornication in one scene, and young woman’s two children are implied to have been born out of wedlock (no mention of father)
Nudity:
Rear male rear nudity as a man exits shower to open front door, plus woman shown in her underwear as she changes her clothes
Alcohol Use:
Characters are shown throughout the movie having alcoholic drinks, and there are multiple scenes that take place in a bar, the main character begins to chug straight from a whiskey bottle when her boss leaves, and one bar scene on a train where the people appear to be slightly intoxicated
Smoking and/or Drug Use and Abuse:
Characters are occasionally shown smoking cigarettes, plus the reason behind the main character spends time in jail has to do with heroin; and,
Miscellaneous Immorality:
Strong amount of miscellaneous content, mostly centering around the negative portrayal of the main character as a negligent mother, elements throughout of dysfunctional family as young woman and her mother are shown to have a very poor relationship, young mother has mothered two children presumed to be out of wedlock as there is no appearance by their father or even a mention of one, young woman lies multiple times to lady who’s employed her and takes advantage of her kindness, plus some examples of moral relativism.

WILD ROSE takes place in Glasgow, Scotland where a young unmarried woman with two children dreams of nothing else but going to Nashville and becoming a country singer. WILD ROSE is highly entertaining, but it has a strong Non-Christian Romantic worldview with lots of foul language, brief lewd content and other immoral content that media-wise moviegoers will find objectionable.

The movie opens just has young Rose-Lynn finishes her time behind bars in Glasgow, Scotland and can now return to her life, despite donning a house arrest band around her ankle. The first place she visits upon her release is to see a guy, before finally getting back to her mother’s house where her two children have been staying while she was in jail. Her children have changed a lot in the past year without seeing their mom, and her daughter will hardly speak to her. Rose-Lynn’s mother insists she begin to take responsibility and get a job and an apartment of her own, but all that Rose-Lynn can think about is getting to Nashville, Tennessee.

Rose-Lynn wants nothing else in this life but to become a country singer. Though she lives in Scotland, she’s never seen without her fringe and white cowboy boots, with headphones on blasting her old country tunes. Her mother finds her a job cleaning a house for a wealthy family. As someone who’s never been mistaken as an overachiever, Rose-Lynn gets into the liquor cabinet as soon as the homeowner, Susannah, steps out. As she’s cleaning with her headphones, she doesn’t even realize the hours that have passed, while Susannah’s own children are standing in the house watching with wide eyes as Rose-Lynn loudly sings along loudly to her music.

After the word spreads from her children, Susannah approaches Rose-Lynn about her music, telling her she’s now gotten her hooked on strong country women, and she wants to help her. Susannah has some connections to a music producer in London, and she records a video of Rose-Lynn singing and passes it along. Not long after, this producer requests to meet with Rose-Lynn at the recording studio in London.

This is great news, except that Rose-Lynn has to ask her mother to watch her children, and her mom is getting more and more fed up with her negligence to her children. However, she agrees, and Susannah puts Rose-Lynn in a first class seat on the train to London.

After the meeting goes well, Susannah ecstatically puts together a fundraiser for Rose-Lynn at her house so that all her wealthy friends can invest into her trip to Nashville. However, Rose has been lying to her this whole time. Susannah doesn’t know that Rose was in jail, or why she was in jail, and she doesn’t know that she has two children of her own that she can’t leave behind to go to Nashville. However, Susannah’s husband has done his research, and he tells Rose-Lynn that, after this fundraiser is over, she needs to be gone from their lives forever.

Rose-Lynn now has to decide for herself what she deems as most important in her life. Will she pursue this dream, disappointing her children even more than she already has, or be the mother that they need and throw her dreams away forever?

WILD ROSE has is highly entertaining. Everything in the movie serves the story, which is well told. The audience feels just as torn as Rose-Lynn does, as she tries to navigate between getting her personal life in order, and also pursuing the dream she’s wanted her whole life. Jessie Buckley, who plays Rose-Lynn, is an absolute fireball, and her voice is naturally fantastic. Veteran actress Julie Walters, as Rose-Lynn’s mother, adds tremendously to the conflict, allowing the audience to see the struggle between a mother and a grandmother who truly wants the best for everyone.

However, the Romantic pursuit of personal dreams dominates Rose-Lynn’s motivation. There is no look to God for guidance, and Rose-Lynn does what is best for herself alone, up until she can’t possibly do it any longer. WILD ROSE also has an excessive amount of foul language, especially the “f” word used in rapid succession. Finally, it contains a brief sex scene and other immoral content that media-wise moviegoers will find objectionable.