"Ocelot Isolation for the Psyche" 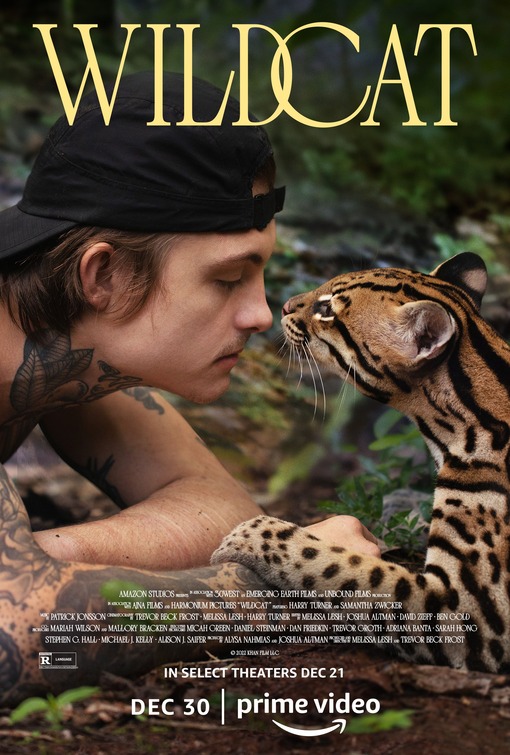 WILDCAT is a documentary about British soldier Harry Turner. Harry is sent to war in Afghanistan at the age of 18, but is medically discharged with PTSD. Traveling to South America to try and sort things out, Harry meets Samantha Zwicker, a wildlife preservationist. By taking care of a young ocelot, to prepare it to return to the wild, Harry realizes that the world isn’t so bad after all. Tragedy occurs when the ocelot is killed by a poacher’s trap. Then, another baby ocelot, Keanu, is brought into the wildlife compound. Might Keanu be the key to Harry’s recovery?

The cinematography in WILDCAT is impressive and beautiful. The wildlife encounters are phenomenal. However, the movie sometimes drags a bit, so it could use some better editing. That said, it tells a compelling story. WILDCAT leaves its protagonists in the hands of a loving family, but it never addresses the spiritual needs of human beings. This, it has a strong humanist, romantic, therapeutic worldview. WILDCAT also comes with lots of strong foul language and dark themes about depression, suicidal thoughts and lewd suggestions.

(HH, RoRo, FR, LLL, VV, S, N, M):
Dominant Worldview and Other Worldview Content/Elements:
Strong humanist, Romantic, therapeutic worldview in which man can save himself, set in a context of recovery from PTSD
Foul Language:
36 “f” words, 11 scatological interjections, and three profanities (including Christ profanities)
Violence:
Scenes of war in Afghanistan, a man loads and points a rifle several times and frequently carries and uses a machete on forest foliage, a man suffering depression says he kind of just wants to cut himself, cuts on his arm are shown later, and a woman says he does this to overcome a panic attack and depression, man talks about having tried to commit suicide in his bedroom, a woman calls a suicide prevention hotline on the man’s behalf when he begins cutting his wrists, an ocelot is killed by a shotgun trap, and shotgun fire is heard several times in the jungle
Sex:
A shirtless man and clothed woman lie together on a bed and hug and kiss, but sex is not necessarily implied, a young man and woman bathe together, but it’s unclear whether they are naked or not, a shirtless man and a fully clothed woman lie in bed together
Nudity:
Man is seen shirtless throughout the movie, and woman is seen in various forms of undress, mostly when swimming, but never to explicit nudity
Alcohol Use:
No alcohol use
Smoking and/or Drug Use and Abuse:
No smoking or drugs; and,
Miscellaneous Immorality:
Nothing else objectionable.

WILDCAT is a documentary about British soldier Harry Turner who’s sent to war in Afghanistan at the age of 18, is medically discharged with PTSD and finds healing for body and soul in a remote location, the Peruvian Amazon, with an unlikely companion, an ocelot, that’s being prepared for a return to the wild. WILDCAT is compelling and has high artistic, entertaining production values, but it could use some better editing and has a strong humanist, romantic, therapeutic worldview with lots of strong foul language and troubling aspects such as acute depression and thoughts of suicide.

Traveling to South America to try and sort things out, Harry meets Samantha Zwicker, a wildlife preservationist who founded and directs a compound called Hoja Nueva. The compound is a Non-Government Organization (NGO) that seeks to protect local flora and fauna from poaching and other destructive practices and specifically to reintroduce certain native species back into the natural environment via Project Rewild.

Meeting Khan, a young ocelot found in the trunk of a felled tree, changes Harry’s life. He begins to regain a reason for living. Harry says, “It really just makes me think that this world that you live in isn’t so bad after all. He’s saving me, and I’m saving him.”

When tragedy strikes and Khan is killed by a poacher’s trap, it seems that all hope of Harry’s recovery is lost. Then, another baby ocelot is brought to the compound. He’s named Keanu and taken deep into the Amazon to reside in isolated safety with Harry until he can be released back into the wild. Might Keanu be the key to Harry’s recovery?

The cinematography in WILDCAT is impressive and beautiful, and the real-life encounters with Amazon wildlife (including sloths, snakes, caiman crocodiles, other ocelots, etc.) really are phenomenal. The two major characters, playing themselves, are both convincing and sympathetic, although the conclusion of their relationship will be a downer for many viewers. The documentary nature of the movie is engaging and effective and helps the movie’s realism. These are real people going through real trauma, trials, and triumph. The story is told well and sensitively, given its very mature subject matter. It has high artistic and entertaining production values. There were times that the movie dragged and more editing was needed, such as in the scenes of Harry’s self-destructive habits. The viewer gets the picture without it beating them over the head with them. Overall, though, this tale of healing from horror through a very unique rehabilitation program is compelling.

However, herein lies one of the movie’s major worldview assumptions of the movie: the idea that the deep physical and spiritual trauma of life can be healed by purely naturalistic means. Harry says of Khan, “He’s saving me, and I’m saving him.” Later, Samantha remarks on Harry’s relationship with Keanu, “I feel like he’s putting so much on this project with Keanu that it’s almost like his redemption.” These are statements of the false gospel of the therapeutic. In this vein, the movie ends leaving its protagonists in the hands of loving family and professional fame but never having addressed the deeply spiritual longings of these human beings made in the image of their Creator. For this reason, the movie has an overall humanist, romantic, therapeutic worldview in which, if there is hope of man’s redemption, it is to be sought through man himself, which will only disappoint. Other troubling aspects in WILDCAT make it very mature faire. For example, WILDCAT has lots of strong foul language, including at least 36 “f” words, and dark elements of depression, self-harm and suicide. So, ultimately, WILDCAT is unsuitable for anyone but an adult audience.

WILDCAT has a brief theatrical run before it goes streaming on Amazon Prime.