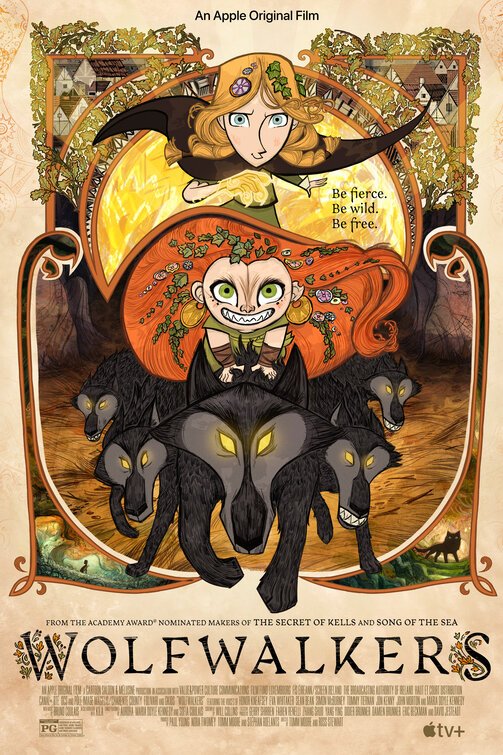 WOLFWALKERS is an Anti-Christian, anti-civilization, politically correct, environmentalist animated movie. Set in 1650 in Kilkenny, Ireland, the movie is about people who turn into wolves while they’re asleep to protect the wolf population. A young English girl named Robyn befriends the Wolfwalkers and tries to save them from the Lord Protector and soldiers of her town. Can the wolves survive? Can Robyn survive? Lots of occult, superstition activity occurs before the movie reveals the answers.

WOLFWALKERS is very clean in terms of no foul language and no sex, but the movie’s occult content is intense. The movie’s Anti-Christian content is also intense, and the violence of the wolves and the soldiers is very frightening. The movie turns the story of the good Christians and the bad werewolves upside down. It does so in a powerful, exciting, animated jeopardy filled way. Ultimately, the movie borders on abhorrent. However, because of some positive family messages, it’s been classified as just excessive. WOLFWALKERS should only be seen with a great, great caution by those old enough not to be taken in by its myth conceptions.

WOLFWALKERS is an Anti-Christian, anti-civilization, politically correct environmentalist animated movie set in 1650 about some people who turn into wolves while they’re asleep, like werewolves, to protect the wolf population of Kilkenny, Ireland. Set in 1650, the villains are the very Protestant Christian English, and the pagan heroes are desperate to save the wolves. The movie is a great disappointment because it is beautiful animation, but completely destroys the filmmakers’ previous movie’s message in THE SECRET OF THE KELLS, where the Bible is the ancient book that Saint Brendan saved from the pagans.

The movie opens in 1650 in Kilkenny, Ireland with a group of woodsmen chopping down the forests around the walled castle town. The wolves, led by the wolfwalkers, a mother and child, drive off the woodsmen. The wolf hunter, Bill Goodfellowe, an Englishman, has no success in stopping the wolves. When he goes home to the ancient cottage in the Irish town, his daughter, Robyn, is practicing with a crossbow and wants to go out with him to kill the wolves. Her father refuses because he promised her mother to protect her.

The next day, after uttering what seems to be like an ambiguous prayer, “may the Lord protect us”, the Lord Protector (who looks like Oliver Cromwell, the English general and statesman who led the Parliament of England’s armies against King Charles I during the English Civil War and ruled the British Isles as Lord Protector from 1653 until his death in 1658), declares that Bill has two days to get rid of the wolves. Robyn secretly follows her father into the woods and gets caught in a trap. A wolf, who turns out to be a wolfwalker, Mebh (pronounced “Mabe”) frees Robyn from the trap and accidently claws Robyn in the process. Mebh tells Robyn she’s a person when awake and a wolf when asleep. The wolf’s mother’s human body is sitting on the throne in a cave, but her wolf body and spirit haven’t returned. Robyn promises Mebh she will help Mebh find her mother.

That night, when she falls asleep, Robyn turns into a wolf because Meh had accidentally scraped her. The soldiers as well as her father see the wolf in town and try to kill it. When she wakes up, she tries to explain to her father what happened, but he will not listen. He forces her to work in the castle as a scullery maid under the direction of some old, wizened women. There, she comes upon a cage, where the Lord Protector has captured Mebh’s mother in her wolf state.

The Lord Protector condemns Bill for not doing a good job of killing the wolves. He demotes Bill to the army and plans a show on a large stage where he will bring out the caged wolf and show the people that he’s tamed it. Needless to say, when he brings out the caged wolf, everything goes wrong. Now Robyn is running with the wolves as a wolf while the soldiers are hunting the wolves. Can the wolves survive? can Robyn survive? Lots of occult, superstition activity occurs before the audience finds out the answers to these questions.

After the premiere sneak screening of the movie, the directors were interviewed by a famous Irish actress who’s not well known in America, Fionnula Flanagan. She immediately understood, she said, that the movie is an Anti-English, anti-colonial, Anti-Christian environmentalist screed. The directors told her she was right and that Ireland was originally known as wolf land. The occupying English forces killed all the wolves. The filmmakers wanted Robyn to be English who becomes Irish, They wanted to include lots of ancient Irish folktales and superstition.

Thus, the movie turns the story of the good Christians and the bad werewolves upside down. It does so in a powerful, exciting, animated jeopardy filled way. The Lord Protector often mentions God and civilization, and he commends his soul to God. The wolfwalkers meanwhile employ psychic energy, chants and occult devices to fight the English.

The truth of the matter is, that the people of Ireland were a mixed group of indigenous peoples, many of whom who moved to Scotland, indigenous Scots who moved to Ireland, and then the English. Much of the era of English colonialism in Ireland was peaceful and much of it was egregiously bad, but the outstanding Irish Christians, such as St. Patrick, who was English, and St. Brendan and others manifested Christian virtues and were there to help the Irish out of human sacrifices and other horrible rites of paganism. Unfortunately, Cromwell was a terribly negative influence and didn’t manifest his Protestant Christian beliefs in his treatment of the Irish. However, a return to paganism isn’t going to help. The mark of the true Christian is the Fruit of the Spirit, love, joy, peace, forbearance, kindness, goodness, faithfulness, gentleness, and self-control, against which there is no law. Civilization is the product of the Fruit of the Spirit being manifested in more and more people who become born again, with real knowledge of Jesus Christ. The love expressed by the Christians overthrew warfare, cannibalism, human sacrifice, and the Celtic priests. They brought Ireland to a place where it became one of the most Christian nations of the world.

In the final analysis, WOLFWALKERS is very clean in terms of no foul language and no sex, but the occultism is intense. The movie’s Anti-Christian content is also intense, and the violence of the wolves and the soldiers is very frightening. So, the movie borders on abhorrent, but because of some positive family messages, has been classified just as excessive. WOLFWALKERS should only be seen with a great, great caution by those old enough not to be taken in by its myth conceptions, as MOVIEGUIDE® Editor Tom Snyder would say.