"Blah Is a Four Letter Word" 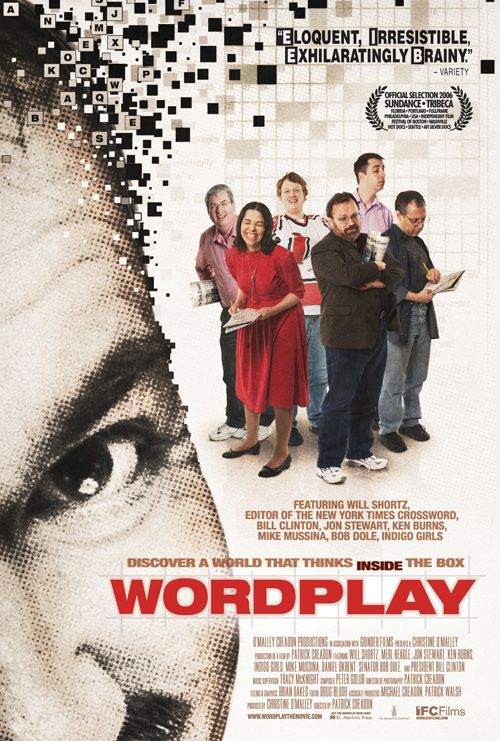 WORDPLAY follows in the tradition of other “competition documentaries” like SPELLBOUND and MAD HOT BALLROOM but doesn’t come close to matching the emotional impact of those films. It follows contestants in the American Crossword Puzzle Tournament and features New York Times puzzle editor Will Shortz. Started by Shortz, the tournament is held annually in Stamford, Connecticut and draws over 500 contestants. The movie, however, is only two-thirds about the tournament. It never quite builds up enough momentum to get off the ground. This is due largely to a lengthy exposition which meanders from Shortz’s background (he actually majored in enigmatology, the study of puzzles, at Indiana University) to famous people praising the New York Times crossword puzzle, such as Jon Stewart, Bob Dole and Bill Clinton, to the history of the puzzle and its conventions.

WORDPLAY never quite gets off the ground owing to its scattered focus and slow pacing. The movie fails to establish the momentum and personal empathy needed to keep viewers interested in the drama of the competition. WORDPLAY’s explicit endorsement of a homosexual relationship, including a male kiss, is regrettable. SPELLBOUND and MAD HOT BALLROOM are better movies.

(H, Ho, L, S) Mostly humanist worldview and a homosexual relationship is explicitly affirmed; several profanities and no obscenities; a brief homosexual kiss between two men; no nudity; beer advertising covers the wall in a character’s room; no drugs or smoking; and, nothing else objectionable.

WORDPLAY is the latest in a spate of what might be called competition documentaries. In this genre, the movie follows participants in some kind of competitive activity. They range from the widely known (the Scripps-Howard National Spelling Bee) to the obscure (an elementary school ballroom dancing competition). In each of these movies, SPELLBOUND (2003) and last year’s MAD HOT BALLROOM, respectively, the characters were exuberant and endearing, and the drama was deeply compelling. Regrettably, even though WORDPLAY goes for the same formula, it doesn’t come close to matching the emotional impact of those movies.

In WORDPLAY, the competition in question is the American Crossword Puzzle Tournament. Started by Will Shortz, the current New York Times puzzle editor, it’s held annually in Stamford, Connecticut and draws over five-hundred contestants. Regrettably, the movie is only two-thirds about the tournament, and WORDPLAY never quite builds up enough momentum to get off the ground. This is due largely to a lengthy exposition which meanders from Will Shortz’s background (he actually majored in enigmatology, the study of puzzles, at Indiana University) to famous people praising the New York Times crossword puzzle (Jon Stewart, Mike Messina, Bob Dole, and Bill Clinton all make appearances), to the history of the puzzle and its conventions. All this dilutes the movie’s focus so that, unless you are a die-hard crossword enthusiast, by the time you’re introduced to the crossword competitors, you will be forgiven for having wondered what’s playing in the auditorium next door.

While pacing is important, in a movie like this, endearing characters are everything. The documentaries previously mentioned are both stuffed with children – squirrelly, hilarious, precocious, earnest, unpretentious, enchanting, full-of-potential kids – and this is to their distinct advantage. Even for the most jaded viewer, the children are impossible to resist. By the time we get to their competitions, we are on the edge of our seats – we have found our favorites, and they have found our hearts.

Adults, however, largely populate WORDPLAY. They are, as you would expect, a quirky bunch, but quirky is not necessarily endearing, and they altogether lack that passionate do-or-die zeal which radiated from the children in the previous films. When you’re ten, losing the spelling bee could very well be the end of the world. Not so with this crowd whose enthusiasm is tempered by something, well, more adult.

There is also the movie’s troubling emphasis on one contestant’s homosexuality. It seems to trip over itself to make sure we know Trip Payne is a homosexual, and as if to pander to one audience while spiting another, it indulges in a totally unnecessary male kiss.

Instead of seeing WORDPLAY, you may want to rent SPELLBOUND or MAD HOT BALLROOM.