"Faith Expressing Itself Through Love" 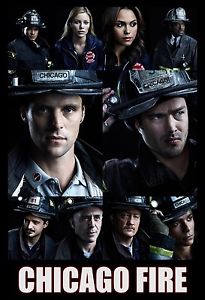 The “Forgiving, Relentless, Unconditional” episode of NBC’s series CHICAGO FIRE delivers a Christian message in a multi-story episode. The main story involves Fireman Christopher Herrmann saving a little boy from a burning building. Herrmann discovers the boy’s father lied about how the fire started. In reality, the father’s burning meth pipe started the fire. Now, the little boy is in critical condition. When the father disappears, Herrmann decides to hunt him down on his own, to deliver some street justice.“Forgiving, Relentless, Unconditional” is dramatic, funny and incredibly moving. All the stories are brought together at the end in a church scene with Fire Dept. chaplain, who delivers a sermon about faith and love. After saying faith can help us see God’s message and plan in our own lives, the chaplain says problems are sometimes God’s way of telling us not to take the ones we love for granted and “to love others as fiercely and as bravely and as compassionately as we can.” This CHICAGO FIRE episode is one of the better ones we’ve seen, but there is some foul language and the references to drug abuse.

In Galatians 5:6, the Apostle Paul says, “For in Christ Jesus, neither circumcision nor uncircumcision has any value. The only thing that counts is faith expressing itself through love.”

In its own way, that’s the explicit Christian message that the March 17, 2015 “Forgiving, Relentless, Unconditional” episode of NBC’s series CHICAGO FIRE delivers, in a multi-story episode about an avenging fireman, a man trying to get back together with an estranged flame from high school, a man trying to decide whether to pursue his friend’s ex-girlfriend, and a little boy in critical condition in the ICU at a city hospital. The episode is riveting, emotionally powerful and inspiring, with a great summation scene set in a church at the end of the episode that brings everything together.

The movie opens with Kelly trying to rekindle an old, broken high school romance with a nurse named April. Mills learns his late grandfather has left his sister and himself a restaurant. Sylvie thinks she should end her relationship with Cruz. Suddenly, the fire crew rushes out to an apartment fire where Herrmann must enter a smoke-filled upper-story room with a little boy trapped inside. Hermann rescues the boy, but the boy’s breathing passages are severely damaged.

Back at the firehouse, the men learn that the boy’s father lied about how the fire started. Instead of a bad electrical plug, the fire started because of the father’s heated meth pipe. Not only that, but a video surfaces where the father blows meth smoke into his son’s face. This enrages Herrmann, who’s determine to find the father, now suddenly missing, and administer some street justice to the creep.

Meanwhile, the boy has to undergo a dangerous operation on a possibly fatal blood clot he’s developed. Also, after talking with Otis, Cruz decides it’s he who should break up with Sylvie, while Kelly seeks April’s forgiveness, and Mills tries to figure out how to tell his sister he doesn’t want to leave the fire department. Finally, Otis suddenly realizes he has feelings for Sylvie, but decides to seek Lt. Casey’s advice about whether he should tell Cruz or Sylvie so soon after their breakup.

“Forgiving, Relentless, Unconditional” is dramatic, funny and incredibly moving. All the stories are brought together at the end in a church scene with Fire Dept. chaplain, who delivers a sermon about faith and love. People often don’t understand God’s timetable, or his plans for them, the chaplain tells the congregation.

“This is where faith comes in,” he says. “Faith can help us see His (God’s) message in our own lives.”

So, when tragedy strikes us, the chaplain continues, maybe that’s God’s way of telling us “not to take the ones we love for granted; to cherish the simple, mundane moments; to love others as fiercely and as bravely and as compassionately as we can.”

This last scene opens with the choir singing “Nearer my God to thee” and ends with a shot of Herrmann sitting in the pews with his own beloved sons, including a final “Amen” to punctuate the scene. The scene is also interspersed with shots of Mills hugging his sister, the fire chief greeting his own wife and baby, and Kelly going to see April’s parents, who took him in during high school when he needed a place to stay.

Thus, ultimately, this CHICAGO FIRE episode ends up having one of the better Christian endings in a Network TV program that we’ve seen, especially recently.

However, CHICAGO FIRE:  Forgiving, Relentless, Unconditional has some light foul language in and the aforementioned references about the father smoking meth and neglecting his son. So, caution is advised.