"Never Quite Makes It" 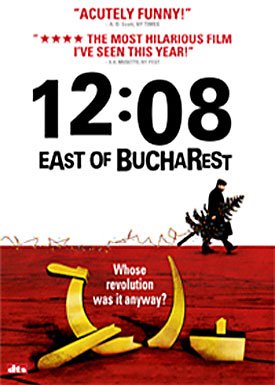 12:08 EAST OF BUCHAREST, a Romanian movie, centers on a local TV program in Romania and its two guests, Professor Manescu and “old man Piscoci.” The two men strive to determine whether a revolution occurred in their town outside of Bucharest on December 22, 1989, when angry crowds forced out Communist dictator Ceausescu. The TV host determines that, if there were protestors in square before Ceausescu fled at 12:08, then there was a the revolution. Manescu claims he and several others were protesting Communism at Town Square prior to 12:08 that day, though the crowd did not arrive until after Ceausescu fled. Unfortunately, Manescu is the town drunk, and evidence stacks against him as he tries to prove he stood up against Communism when few would.

12:08 EAST OF BUCHAREST is a short but boring movie that moves along at a snail’s pace. It has some redeeming qualities but is not worth your time unless you have vivid memories of the Romanian revolution. The movie contains fairly excessive cursing and a main character who is the town drunk. Ohterwise, there is no questionable content, and the movie has strong anti-Communist sentiments.

(Pa, B, ACAC, LL, AA, M) Mixed pagan worldview with both pagan and moral elements and strong anti-Communist viewpoint; 19 obscenities and profanities; no violence; no sexual content; no nudity; some alcohol use, with a protagonist who is a drunkard; no smoking or drug use; and, protagonist spouts racial slurs but later apologizes.

12:08 EAST OF BUCHAREST centers on a local TV station in Romania and its two guests, Professor Manescu and “old man Piscoci,” as they strive to determine whether or not a revolution occurred in their small town, outside of Bucharest, on December 22, 1989, when angry crowds forced Communist dictator Ceausescu out of Bucharest. The dictator fled at 12:08 in the afternoon, thus the significance of the movie’s title.

Manescu claims that he and several others were protesting Communism at Town Square prior to 12:08 that day, though the crowd did not arrive until after Ceausescu had fled. The TV host has determined that if, in fact, there were protestors present before that time, then their little town did participate in the revolution. Unfortunately, Manescu is known as the town drunk, and evidence is stacked against him as he tries to prove that he stood up against Communism when few would.

While the concept seems interesting enough, the execution is anything but. Running at only 89 minutes, we found ourselves constantly checking the time. It was an extremely slow-moving and inconsequential film that may have worked better as a short or a documentary. The problem is not simply that 12:08 EAST OF BUCHAREST is “slow out of the gate,” because sometimes movies that move at a snail’s pace work as long as they are executed well. Instead, the characters have few stakes and little development, and the plot seems to go nowhere. To its credit, the ending is very touching, but that emotion could have been increased tenfold had the rest of the film been halfway as intriguing.

Some of the camerawork is effectively offbeat, and it is clear the reason is to evoke a sense of the TV station’s lack of professionalism. In other areas of the movie, however, viewers get a nice contrast with some great cinematography and beautiful cityscapes.

Upon researching the movie after viewing, we were startled to discover it was supposed to be a comedy/drama. Where was the comedy? Though it has a few funny elements, particularly with the character Piscoci, the movie is, overall, not very amusing. Perhaps this is simply because of cultural differences, considering this movie was made in Romania with a Romanian director, likely meant for Romanian audiences.

Parents should note that 12:08 EAST OF BUCHAREST has a fair amount of cursing and is not appropriate for children. Aside from this and a main character who is the town drunk, there is no questionable content. The film is well intentioned with a strong anti-Communist sentiment. The movie is intended for older teenagers and adults, but unless a viewer has vivid memories of the revolution in Romania, the story may not hold his attention.