THE PHANTOM OF THE OPERA 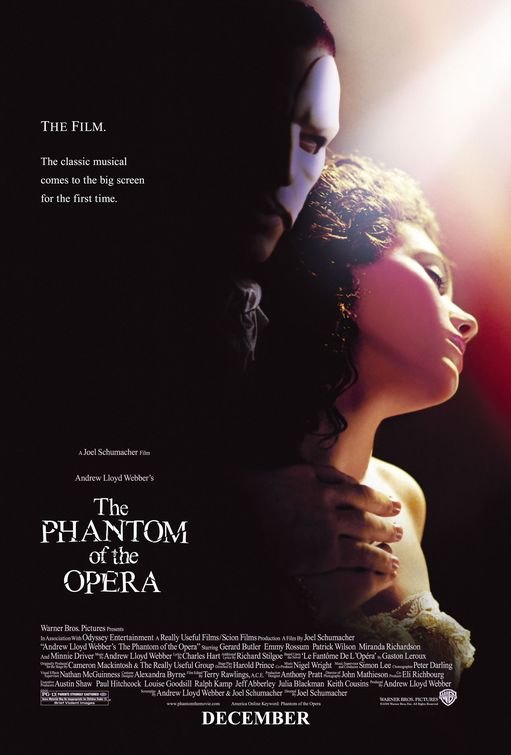 THE PHANTOM OF THE OPERA is the musical story of a disfigured, angry man who lives beneath a Paris opera house and terrorizes its cast and crew so that his student, a young woman named Christine, can have a chance to sing the lead part. The Phantom gets his way, but the acclaim that Christine receives from her singing brings the attention of Raoul, a rich young nobleman. Their budding relationship pains the Phantom, who himself is in love with Christine.

THE PHANTOM OF THE OPERA is the most sumptuous, most beautiful movie of the year. It retains much of the bravado, spectacle, depth, and gorgeous, haunting melodies of Andrew Lloyd Webber’s popular Broadway show. Visually, the movie succeeds boldly. The acting and singing are excellent, though perhaps not quite as good as that of the original cast. Whether or not you like the movie may depend to a large degree on whether you already like the source material or enjoy musical theater. That said, the movie retains the redemptive, Christian allegory of the original, and even adds to it. All of the dramatic, visual and musical motifs come beautifully together in the inspirational ending.

(CCC, BB, Ro, FR, L, VV, N, A, D, M) Very strong Christian allegory and worldview about grace, sacrifice, forgiveness, and redemption, which includes heroine making an important plea to God at the story’s climax, with strong moral tone implied, though not perfectly stated because of some possible Romantic, antinomian elements; two light obscenities and two light profanities; boy in circus whipped, boy strangles and murders his cruel attendant, men hanged, people crushed by falling chandelier but little is shown, and a swordfight with hero getting his arm wounded; villain caresses and seduces heroine but no sex scenes implied or depicted; man moons the camera and some skimpy dancer outfits, plus one of the opera players looks through a secret peephole into the female dressing room but no nudity is shown; alcohol; cigar smoking; and, seductive villain tries to seduce heroine, villain seeks revenge and abduction.

THE PHANTOM OF THE OPERA is the story of a disfigured, angry man who lives beneath a Paris opera house and terrorizes its cast and crew so that his student, a young woman named Christine, can have a chance to sing the lead part. The Phantom gets his way, but the acclaim that Christine receives from her singing brings the attention of the opera’s new patron, Raoul, a rich, desirable young nobleman. Their budding relationship pains the Phantom, who himself is in love with Christine.

As Christine and Raoul grow closer, the Phantom becomes increasingly bold in his strikes against the opera house. Christine must figure out whom she can trust, but it might not matter if the Phantom succeeds in seducing her to join him.

THE PHANTOM OF THE OPERA is the most sumptuous, most beautiful movie of the year. It retains much of the bravado, spectacle, depth, and gorgeous, haunting melodies of Andrew Lloyd Webber’s popular Broadway show. Set in the late nineteenth century, the movie benefits from spectacular sets and costumes. Visually, the movie succeeds boldly. Although the lead performers may not be as good as the original English cast on Broadway, they all do an excellent job, especially Emmy Rossum as the heroine, Christine.

This movie version adds some background to the story. It also extends the prologue and adds a provocative epilogue.

Whether or not you like this movie might depend to a large degree on whether you already like the source material, or enjoy musical theater. Fans will most likely be pleased by this adaptation (though some may think the cast is too young and inexperienced). All of the famous elements from the play are present. The spectacle is as grand as the Broadway show, and the music is as beautiful and inspirational as ever.

If you are not a fan of Broadway shows, however, you may be stupefied and wonder what the fuss is all about. You may think that the movie is too melodramatic. Melodrama, however, is a valid genre of theater and film that can be just as artistic and profound as the most realistic drama. In fact, THE PHANTOM OF THE OPERA contains much depth in its dramatic, musical presentation. The creator, Andrew Lloyd Weber, expertly weaves together his dialogue and beautiful musical motifs from beginning to end. Director Joel Schumacher adds his own visual motifs to the story. All of the motifs come beautifully together in the climax of the story, which is never easy to do.

Best of all, the basic story in Andrew Lloyd Webber’s opera is a Christian allegory. The good news is that the movie retains all of the Christian metaphors from the original musical play, and adds to them. Christine is a symbolic Christian character who, in the movie’s emotional climax, shows compassion, sympathy and kindness to the twisted Phantom. It is her willingness to sacrifice herself that ultimately gets the Phantom to relent from his final deadly plan. Figuratively speaking, the Grace, or undeserved love, she shows saves the Phantom from the evil within him. In effect, she ends the dark music in the Phantom’s soul, as the lyrics suggest.

To complement the original play’s strong redemptive, Christian worldview, the movie adds some positive Christian content of its own. For example, a couple times in the movie version, Christine seeks refuge in the chapel of the opera house, where a stained glass window seems to show a monk holding a cross as he preaches the Gospel of Christ. The movie also takes the image of a single rose from the play and combines it with images of snow. The combination of these images can be symbolic of the flesh and blood of Christ, who saves us from all sin. In the end, these images become a symbol of the Phantom’s redemption.

These Christian references may turn off secular critics and anti-Christian bigots, but MOVIEGUIDE® thinks they will appeal to a broad audience. The beautiful music and grand spectacle are not the only reason why this musical has become such a popular cultural phenomenon. For God has placed in the spirit of all people a knowledge of God and a yearning for the salvation that comes through Jesus Christ.