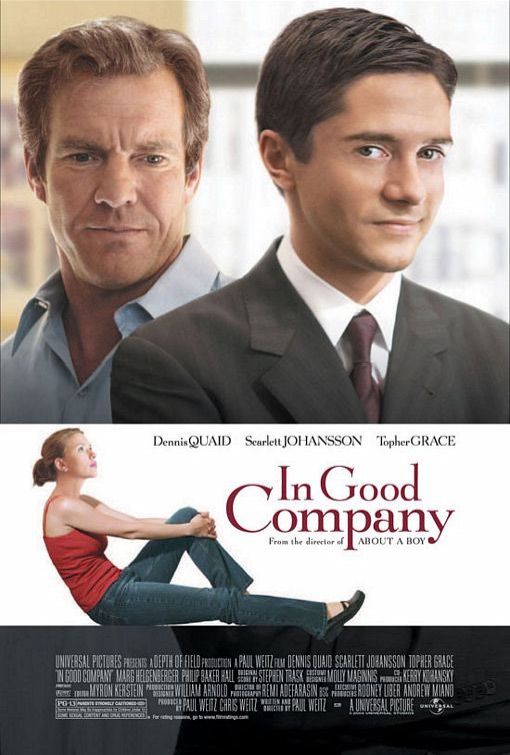 IN GOOD COMPANY is a surprisingly warm, authentic story with a moral perspective. Dennis Quaid is Dan Foreman, an accomplished ad executive who gets a surprise when his new boss is a cocky 26-year-old, played by Topher Grace. Dan’s life gets more complicated when his college freshman daughter begins dating the new boss. IN GOOD COMPANY looks deeply into Dan’s moment of crisis as he feels that he has suddenly become too old to do his job, too old to be a new dad, and too old to relate to his grown daughter. These situations may seem like sitcom fodder, but the characters become three-dimensional people because of good writing and acting.

IN GOOD COMPANY is about loyalty inside families, at work, and in love. There are some poignant, sad moments mixed in with the joys of staying faithful to what is right. Furthermore, Dan is a good dad and a dedicated husband. Thus, the movie assures viewers that the dream of a functional marriage is still in sight. IN GOOD COMPANY requires extreme caution for children or most teenagers, because of persistent foul language and sexual indiscretions that will confuse them.

IN GOOD COMPANY is a surprisingly warm, authentic story with a moral perspective that blooms out of the characters’ difficulties. Dennis Quaid is Dan Foreman, an accomplished advertising executive comfortable in his routine. He has two daughters in their late teens and a lavish office. Life throws him a curve when he finds out that his middle-aged wife is pregnant and that his new boss is a cocky 26-year-old (played by Topher Grace of THAT 70’S SHOW).

Dan’s life gets more complicated when his college freshman daughter begins dating his new boss. These situations may seem like sitcom fodder, but the characters become real people, and the audience empathizes with each of them at some point.

IN GOOD COMPANY looks deeply into Dan’s moment of crisis as he feels that he has suddenly become too old to do his job, too old to be a new dad, and too old to relate to his grown daughter. The betrayal he feels from her makes for the movie’s saddest and most poignant, successful scene. Seeing Dan confront his boss and his daughter is a reminder of how easy it is to be disloyal to those we love if we become self-centered – a faint echo of Peter’s denial of Jesus.

Carter Duryea, the young boss, won his new position through unflinching confidence and some slick talk. His wife leaves him after only a few months of marriage, however, and his dreams of the ideal life start falling apart. Carter is unsure of himself, despite his convincing façade. His desperation with Dan’s daughter reveals some of this conflict.

The lesson learned here is that loyalty keeps life from becoming lonely. Dan knows that his daughter Alex loves him, but her disloyalty still makes them feel separated. Disloyalty by Carter’s wife disconnects the two of them. The media conglomerate that buys Dan’s magazine and lays off its employees finds financial setbacks because of its disloyalty. Parallel storylines practically drill the lesson into viewers’ heads.

Furthermore, Dan is simply a good man. He states what he believes and acts on it, and he isn’t concerned with dodgy politics. He is a good dad, and he listens to his daughters and always wants to know them better. He has a successful marriage, too. Carter sees Dan’s family life and wants it for himself. IN GOOD COMPANY assures us that the dream of a good, functional marriage is not out of sight.

The acting in this movie is terrific. The actors bring out the nuances of the characters and make them three-dimensional. The story comes close to being predictable but avoids it until the end, when everything ties together a little too neatly. Forgive that misstep. Most of the movie is true to life and makes one crave the kind of big-hearted, loving connections that are occurring on the screen.

As the story’s nature suggests, IN GOOD COMPANY requires extreme caution for children or most teenagers. In addition to persistent foul language, there are mentions of sexual indiscretions that could confuse people who are not on solid footing.

Accessible to a mass audience but still made with quality and some subtlety, IN GOOD COMPANY is a successful look at family life and the connective tissue that holds society together.

Rating: PG-13 for some sexual content and drug references

Writer: Paul Weitz BASED ON THE NOVEL BY: N/A