"Not a War Movie, Not a Historical Document – Just Muddled" 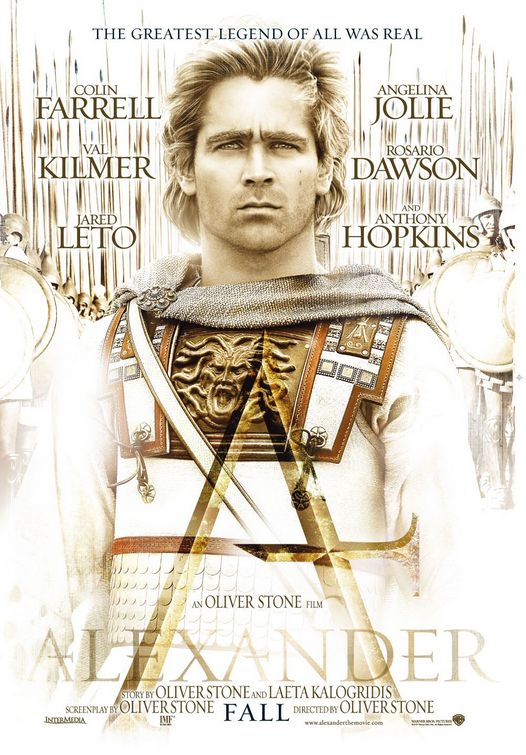 Oliver Stone’s ALEXANDER glimpses the life of Alexander the Great, or at least a version of it. Colin Ferrell plays the title character, whose mother, played by Angelina Jolie, helps guide him to the Greek throne. Alexander’s youth and boldness fuel him to conquer 90% of the known world. The movie focuses on battles in Persia, Egypt, and India. His tireless desire for glory defeated Alexander before any enemy could. He overextended his army and withdrew from his final battle.

The script lacks focus. An episodic structure prevents ALEXANDER from delving too deeply into his military accomplishments or his psychology. The dialogue is stilted, and the sets are often noticeably cheap. Some of the actors’ accents are comical. The fight scenes are gory and blood-stained, and there is some graphic sex. Audiences expecting a war movie will be disappointed, but so will people wanting a historical document. Oliver Stone takes too many liberties with his characters, injecting traits and events that no historian would authenticate. What remains is a muddled, overlong, occasionally amateurish movie. Alexander the Great is terrific material, so hopefully someone with a clearer vision will try again in the future.

(HH, Pa, RHRH, FR, I, PC, Ho, L, VVV, SSS, NN, AA, M) Muddled humanist worldview in which achievement and personal glory are paramount, with pagan moral sensibilities, strong revisionist history in which Alexander the Great is said to be bisexual and many heretofore unknown character traits are attributed to him, talk about mythic Greek gods, internationalist multicultural idea advocating that all cultures should mix because they are equivalent, and suggestive homosexual content includes two men kissing; two obscenities; graphic, gory war violence with men being speared, stabbed, hit in the head, trampled by elephants, and attempted rape, animal sacrificed before battle, mercy killing of a wounded soldier, traitors executed, graphic depictions of battle, and boys wrestle; married couples have intercourse, some of which is graphic but all of which is physically forced on the women, Alexander beckons a man to his bedroom, and two men kiss; upper and side female nudity during sex, and rear male nudity; alcohol and drunkenness; and, treachery and drinks poisoned.

Oliver Stone’s ALEXANDER glimpses the life of Alexander the Great, or at least a version of it. As should be expected from the writer and director of JFK and NIXON, Stone takes great liberties with history’s understanding of Alexander, molding his own conflicted, occasionally good-natured, ultimately headstrong creation.

Colin Ferrell plays Alexander, son of King Philip, whose mother helps guide him to the Greek throne. (The parents are played by Val Kilmer and Angelina Jolie, respectively.) Alexander’s youth gives him boldness, and his boldness fuels the Greek army to systematically conquer about 90% of the known world. The first big victory is in Persia, where Alexander makes his new home and takes a wife.

As is the case with any leader, Alexander has more on his mind than victory. He has to worry about politics and power plays from his advisors, maintaining his family, and taking care of his army. Alexander is a kind ruler at times, and, later, more hardheaded and mean. Stone goes out of his way to show this duality, quite clumsily, but it’s little more than a storytelling exercise. It does not help the audience understand Alexander any better. The audience never connects with Alexander, and it can understand him only superficially.

In the months before release, a small controversy had been generated about homosexual content in the movie. In the version that is being released, however, there is much less bisexual or homosexual content than had been reported. Alexander says that he loves his best friend, Hephaestion, but it is not specified or even clearly suggested that they are lovers. Some characters make comically obvious references to the ambiguity, but it seems present more to stir up controversy than to shade Alexander’s character. Alexander does kiss a male servant and beckon him to bed, however. He mostly seems disinterested in physical pleasures from men or women. More disturbing is that all of the heterosexual scenes appear to be rapes.

The script lacks focus, especially because the episodic structure prevents ALEXANDER from delving too deeply into his militaristic accomplishments or his psychology. The dialogue is stilted, and the sets are often noticeably cheap. Some of the actors’ accents are borderline comical, especially Angelina Jolie’s furry Transylvanian style that seems more at home in this year’s neo-vampire movie VAN HELSING. The men all sport English and Irish brogues, for no good reason.

Audiences expecting a war movie will be disappointed. Alexander’s conquest into India is exciting, mostly for the spectacle of elephants stampeding through a lush green forest. Unfortunately, this is his last battle and comes after two-and-a-half hours of movie.

Audiences expecting a historical document will be likewise disappointed. Oliver Stone takes too many liberties with his characters, injecting traits and events that no historian would ever vouch for.

What remains is a muddled, overlong, occasionally amateurish movie. Alexander the Great is terrific movie material, so hopefully another director with a clearer vision will try again in the future.