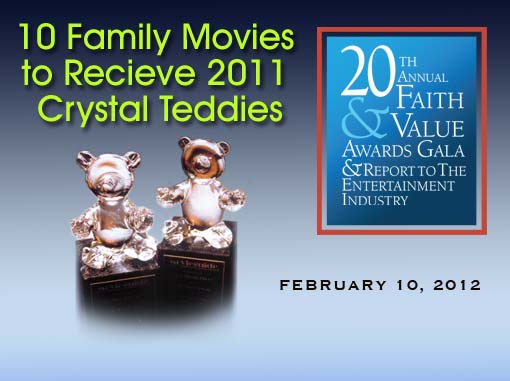 All 10 movies will be honored at the 20th Annual Faith & Values Awards Gala and Report to the Entertainment Industry Friday, Feb. 10, at a TV show and banquet at the Universal Hilton Hotel in the heart of the worldwide entertainment industry in Los Angeles, with one of the 10 being named the Best Movie for Families in 2011.

The list of 10 Best 2011 Movies for Families, in alphabetical (not final) order, are:

Other movies, television programs, and people being honored Feb. 10 include the Ten Best 2011 Movies for Mature Audiences, the Most Inspiring Movie and TV Program of 2011, the Most Inspiring Performances in Movies and TV in 2011, the $50,000 Kairos Prizes for the Most Spiritually Uplifting Screenplay by Beginning Writers, and the Best Movie and TV Program in 2011 Promoting Positive American Values.