A WALK TO REMEMBER

"The Milk of Christian Kindness" 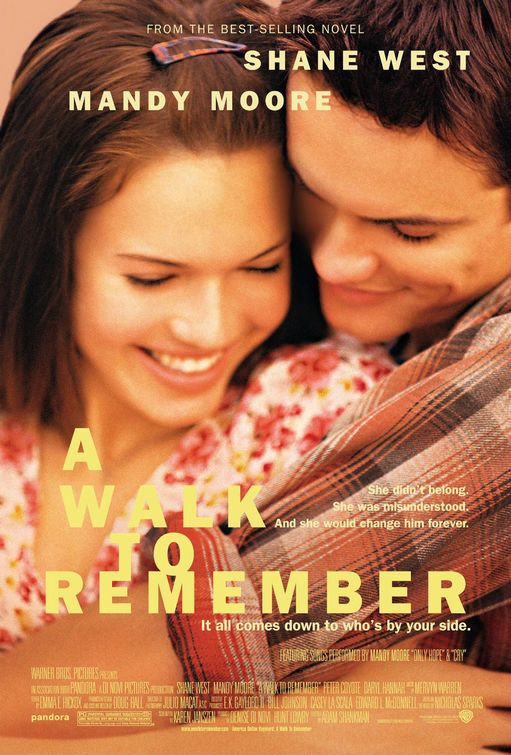 A WALK TO REMEMBER is a romantic teenage tearjerker based on a novel by Nicholas Sparks. Landon Carter and his gang of fellow misfits open the story by hazing another high school student into their group, which results in physical harm to the boy. Though Landon evades arrest by lying to the police about his involvement in the incident, the school principal finds empty beer bottles as evidence of Landon’s continued slide into debauchery. For disciplinary purposes, the principal assigns him to a theatre class and extra time at school on weekends as a tutor. There, Landon meets Jamie, a nerdy pastor’s daughter with upstanding, uncompromising Christian morals. While doing his penance, Landon finds himself drawn into Jamie’s moral universe.

Although there are some unresolved subplots, the production values in A WALK TO REMEMBER are high, and the actors all give very good performances, including the two leads, Shane West and pop star Mandy Moore. From a Christian standpoint, however, the most disappointing thing is the Romantic notion that, somehow, human love can conquer what’s bad and “save” someone from immorality. Still, the movie shows that Christian kindness can make a difference in other people’s lives

(CC, BB, Ro, LL, V, A, M) Christian worldview with solid moral elements, including strong abstinence message & boy honors Christian girl’s commitment to abstinence, but with some Romantic notions regarding male/female relationships & human love; between 19 obscenities (no “f” words), a couple of muffled profanities & some sexual vulgarities & innuendoes, plus some implied urinating; gang of “tough kids” trespass, seriously hurt another teen during prank & leave him to be found by police, evading police, gang wrecks car, people lie to police to escape charges, brief fisticuffs; girl invites boy into her home while parents are away insinuating they’ve done so before (he declines asserting that they are no longer dating), & a fully clothed boy mocks sexual activity while reading romantic script aloud plus passionate kissing & clean sexual tension; glimpse of altered image of thong bikini clad model with lead characters’ face superimposed onto it; alcohol use; no smoking; and, bitter conflict between boy & father who left both the boy & his mother (eventually forgiven) & the “good girl” purposely omits an important element of the full truth to her father.

A WALK TO REMEMBER is a romantic teenage tearjerker based on a novel by Nicholas Sparks. This is the second screenplay adapted from one of his books. He also wrote MESSAGE IN A BOTTLE. The production values are high, and the actors give very good performances.

Landon Carter and his gang of fellow misfits open the story by hazing another high school student into their group. They further establish that they are the bad kids by cursing, urinating in public (implied, not shown) and uttering a flurry of sexual innuendoes. Little do they know that the prank they have planned for their initiate will go terribly wrong. The poor boy ends up unconscious, bleeding, abandoned, and hospitalized. Though Landon evades arrest by lying to the police about his involvement in the incident, the school principal finds empty beer bottles as evidence of Landon’s continued slide into debauchery. For disciplinary purposes, the principal assigns him to a theatre class and extra time at school on weekends as a tutor.

Jamie is a portrayed as a nerdy, frumpy, pastor’s daughter. She has upstanding, uncompromising Christian morals and is very secure in who she is. At one point, after receiving a well-rounded onslaught of insults, she’s asked if it doesn’t matter to her what others think, and she replies that it truly doesn’t.

While doing his penance, Landon finds himself off balance on Jamie’s “home turf.” He is assigned the leading role opposite her in a school play. After struggling with his part, he ends up asking Jamie for help with his lines. She says she will, but adds a caveat that seems out of context at the time, “You have to promise not to fall in love with me.” This sets up the inevitable romantic drama that follows.

The main theme of the story has to do with the fact that Jamie sees potential in Landon that no one else has acknowledged all his life – he is special and can do just about anything that he sets his mind to – and she tells him so. Inspired by Jamie’s kindness, Landon shares his dreams of college and career with his divorced mother, but, for some reason never fully developed in the script, she gently tries to dissuade him.

In contrast to Landon’s mother, Jamie encourages Landon and holds him to her high standards. As their relationship grows, he rises to the challenge. He changes into a motivated, kind and romantic young man.

As an aside, a speaker, who has made her living speaking to millions of high school and college students, insists that teenagers will rise to the level of expectations placed on them. This movie ascribes to that same theory. It illustrates, to teenagers especially, that they can make a difference in people’s lives by being kind and living an unabashedly exemplary life themselves.

There are several subplots that are introduced but never thoroughly developed as the story sticks mainly to the growing relationship between the two lead characters. The movie seems to do well without their full development until the discussion on the drive home from the theater reveals that there are some pretty important issues introduced, underdeveloped and, ultimately, holes left that, if filled, would have made a good movie much better.

One of these subplots deals with the embitterment Landon suffers because he feels his father abandoned he and his mother and then callously remarried. It seems much of the trouble Landon gets into is due to his “acting out” the anger and insecurity caused by the divorce. Though it is brought to a resolution that is only emotionally, not intellectually, satisfying, the strained relationship between Landon and his father is only really fleshed out as it relates to the key plot twist between Landon and Jamie.

From the Christian standpoint, the most disappointing thing about this movie is the Romantic worldview that, somehow, human love can conquer what’s bad and “save” someone. If I had a daughter, I’d be concerned that, after seeing this movie, she’d get some romantic notion of finding an unruly boy and taming him herself. There is plenty of context provided in the movie to be able to at least allude to a religious conversion of sorts (no, I don’t believe every movie with a Christian theme needs to portray conversion exlicitly), but it is stated quite explicitly in A WALK TO REMEMBER that Jamie’s faith in Landon saved his life.

Unfortunately, the movie reflects a phenomenon observable in the Church throughout much of the United States: the strong spiritual woman who wears the spiritual pants in the family. These women marry the “good” backslidden or unregenerate men. These men tend to love and respect their wives and support their families, but rarely set foot in church. Landon clearly states that he doesn’t believe in God and challenges Jamie’s faith point blank. She responds poetically that just as she can’t see the wind, but sees and feels its effects, she relates to God the same way. Landon only conforms to what Jamie requires of him, not to God. I guess at least he is headed in the right direction – or is he?

As an exemplary Christian girl, Jamie should know better than to be “unequally yoked.” Her father puts up a good fight to keep this troubled boy away from his daughter, but, in the end, he surrenders to her tenacity as he sees Landon changing, and Jamie growing more and more in love with him. This point may make A WALK TO REMEMBER the ultimate “missionary dating” movie for those who ascribe to such a technique.

Watch A WALK TO REMEMBER: