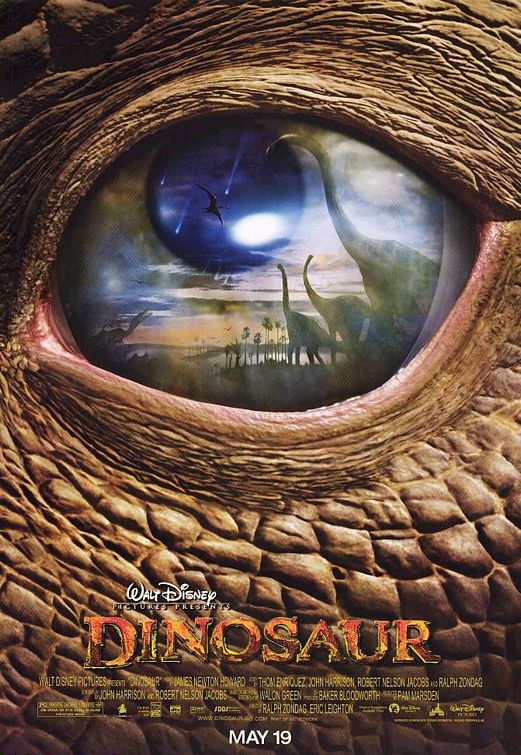 DINOSAUR tells the story of a family of lemur monkeys, accompanied by their adopted veggie dinosaur son and brother, Aladar, who meet a herd of veggie dinosaurs. The herd is looking for a green “nesting” valley that they periodically migrated to before a large meteor destroyed part of their planet, presumably earth, including the island home of Aladar and the monkeys. The herd must fight off thirst, hunger and some meat-eating dinosaurs. Aladar’s wisdom and courage saves them from these dangers.

Although DINOSAUR includes some story elements favoring an evolutionary worldview and favoring political correctness, it contains mostly a moral worldview. DINOSAUR not only teaches taking care of those who are weaker and standing up to bullies, it also ironically includes some statements against the evolution concept of “survival of the fittest.” Furthermore, it has redemptive elements of sacrificing oneself for the welfare of others, even to the point of death. Finally, although some of its action violence may scare small children and there are two scenes with baby dinosaur dung, this is a great-looking, well-produced movie that’s very enjoyable, if sometimes predictable and familiar. Teaching children to be media-wise is advised

Godless, Christophobic evolutionists have brainwashed many people so well that it’s hard to think of dinosaurs these days without linking those gigantic “thunder lizards” to Darwin’s concept of evolution. “E” does not always follow “D,” however, meaning that it is possible to fit dinosaurs within a Christian worldview based on a traditional understanding of the Bible.

Christian scientists with a traditional biblical viewpoint have managed to do this in several different ways. Consequently, there are several differences of opinion among Bible-believing Christian scientists about what the Bible really teaches concerning God’s Creation. Disagreements among Christian scientists with a traditional view of the Bible generally fall into the old “young earth” versus “old earth” debate: Did God create the world in six consecutive 24-hour days, or did He create the world over a much longer period of time in some way? A side debate concerns the question: Was the Great Flood a worldwide event or a local event of great, but limited, magnitude? MOVIEGUIDE® cannot settle such questions in this limited space here; but, these questions do affect how many Christians view the dinosaurs and the mystery of their disappearance.

Happily, Walt Disney’s new animated extravaganza, DINOSAUR, pretty much avoids these controversial issues, though Christians who hold to a young-earth reading of the Bible will not like it. This movie is, in fact, rather a strange little beast, for two basic reasons: A. The vegetarian dinosaurs in DINOSAUR speak English, placing this movie firmly in the realm of fantasy; and, B. At several points in the story, the “heroes” and “heroines” reject Darwin’s traditional notion of “survival of the fittest.”

These qualities are quite surprising, especially given the fact that the movie has a large meteor striking the earth. The theory that a meteor striking earth led to the disappearance of the dinosaurs was originally designed to refute the notion of the Great Flood and to attack the reliability of the Bible while, at the same time, supporting Darwin’s long outdated theory of evolution and “natural selection.” However, the original reason for this theory has been lost for the most part as the educational establishment has accepted it.

Thus, in the case of DINOSAUR, a large meteor sends a herd of veggie dinosaurs in search of the green “nesting” valley that they periodically migrated to before the meteor struck. Although the meteor is devastating, it is not completely so. (Nor does the movie imply that the Great Flood did not take place later on in earth’s history.) After surviving the initial impact, a family of lemur monkeys, accompanied by their adopted veggie dinosaur son and brother, Aladar, hook up with the dinosaur herd looking for the valley. With Aladar’s wisdom and courage, the herd must fight off thirst, hunger and some meat-eating dinosaurs. Along the way, Aladar, the big hero of the movie, rejects the Darwinistic notion put forth by a bully dinosaur leading the herd, who expresses a belief in the “survival of the fittest.” In fact, the bully dinosaur says that any dinosaur that cannot keep up or does not survive did not “deserve” to survive in the first place.

Unlike the bully, Aladar believes that the strong should help the weak. This is a biblical, even Christian, worldview. It is also directly at odds with those godless, Christophobic evolutionists who always seem to blindly follow an anti-Christian view of the theory of evolution. Such evolutionists rarely answer the genuine arguments put forth by Creationists.

Contrary to what many think, there are many ways to give an orthodox, even “literal,” translation and interpretation of the first two chapters in the Bible describing God’s Creation of the earth. Moreover, there are good scientific, historical and philosophical reasons to believe that all men who live today, or lived in the past, are descended from one single man and woman who rebelled against God. Their rebellion created the need for a Divine Savior, Jesus Christ, who came to die to deliver all men from the sinful or evil nature created by that original rebellion.

Thus, although DINOSAUR includes some story elements favoring an evolutionary worldview and favoring a view that advocates pluralism and being kind to outsiders and misfits, it contains mostly a moral worldview. DINOSAUR not only teaches monogamous heterosexuality, taking care of those who are weaker and standing up to bullies, it also includes the anti-Darwinian belief mentioned earlier. Furthermore, it has redemptive elements of sacrificing oneself for the welfare of others, even to the point of possible death or death itself. Finally, although some of its action violence may be scary to small children and there are two scenes with baby dinosaur dung, this is a great-looking, well-produced movie that’s very enjoyable, if sometimes predictable. Parts of the story, though, are too reminiscent of last year’s animated TARZAN. As usual with Disney, however, the animation and special effects are superb.

As always, teaching children at the appropriate stage of cognitive development (in this case, the concrete stage) to be media-wise, will help cover any possible problems created by watching DINOSAUR.