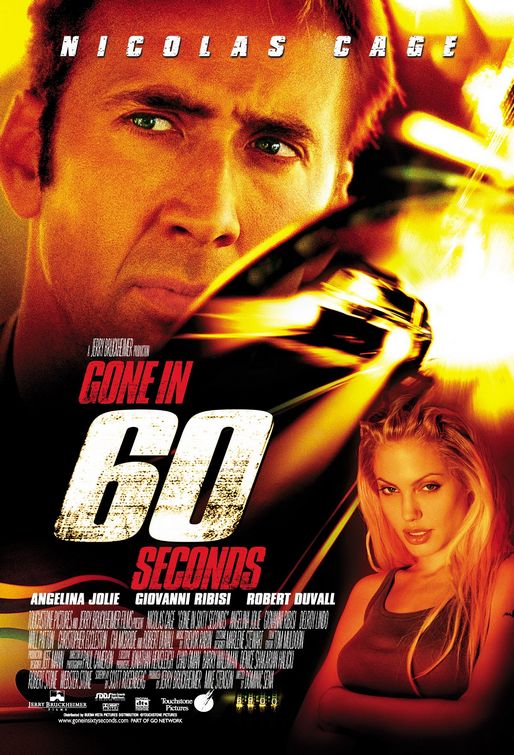 Centering an action story on a bunch of car thieves is morally problematic, to say the least. GONE IN 60 SECONDS is an entertaining summer movie, however, that manages to give some redemptive moral qualities to the hero and his quest. The hero eventually does the right thing. Diminishing these positive aspects is the fact that Memphis gets away with lots of reckless driving endangering people’s lives, although no innocent people or policemen are killed. GONE IN 60 SECONDS also contains plenty of foul language, including strong profanities. In addition, there is one scene where Memphis and Sway watch through a large window as another couple begins to undress one another

Turning an antihero into a hero can be a tricky business if you don’t know what you’re doing. Unless the audience has some positive moral touchstone to identify with the antihero and his predicament, the artist runs the risk of losing their interest. Producer Jerry Bruckheimer, the man behind such huge hits as TOP GUN, THE ROCK and ARMAGEDDON, mostly succeeds with his newest action thriller, GONE IN 60 SECONDS. He teams up for the third time with superstar Nicolas Cage, who plays a reformed car thief forced to return to his criminal lifestyle. The hero eventually does the right thing.

Cage plays Randall “Memphis” Raines who, after an ominous visit from an old friend, finds he has no choice but to return to stealing cars in order to save his brother and mother’s life. Memphis left Los Angeles six years ago when his mother asked him to walk away from his legendary career as a car thief so that his younger brother, Kip, would not follow in his footsteps. Her plan doesn’t work out, however, when Kip fails to perform on a contract with a psychotic Englishman named Raymond Calitri. Calitri has viciously eliminated all the competition in Long Beach. He tells Memphis that, unless he completes his brother’s contract to steal 50 cars in the next four days, he will kill both of them and their mother.

Memphis reassembles his old team of car thieves, including a father figure named Otto played by Robert Duvall. Otto now has a successful auto restoration process, but, when he learns about the death threats, he agrees to help. Complicating matters is Memphis’ old girlfriend, Sway, played by recent Oscar winner Angelina Jolie. Like her ex, Sway is an expert thief. Reluctantly, she too agrees to help. Using the high-tech skills of Kip’s gang of thieves, Memphis and his crew decide to steal all 50 cars in one single night, to stymie the police. They also hope to avoid the dogged policeman following their trail, Detective Castlebeck, played by Delroy Lindo of THE CIDER HOUSE RULES. Making matters worse is the fact that they also have to avoid a rival gang of car thieves who think Memphis is trying to reestablish his territory.

GONE IN 60 SECONDS is an entertaining summer movie that, in some ways, brings back the thrills of the SMOKEY AND THE BANDIT movies in the 1970s with Burt Reynolds, albeit in an urban setting. It is, in fact, a remake of a cult movie from 1974, made by the late Toby Halicki, who became known as the “Car Crash King.” To distinguish the new film from the predecessor, the filmmakers have enlarged the scope of the movie by adding some characters and increasing the motivation for Cage’s character. The movie, in fact, has almost added too many characters, but it makes a good effort in distinguishing among them.

Centering an action story on a bunch of car thieves is morally problematic, to say the least. GONE IN 60 SECONDS, however, almost completely succeeds in giving viewers a moral undercurrent to help them identify with Memphis, the antihero Cage plays with his usual panache. Memphis rebukes his brother for getting involved with stealing cars. He reluctantly agrees to steal the 50 cars after the villain threatens the lives of his brother and their mother. At the end of the movie, he disrupts the villain’s plans by eventually telling the police where they can pick up the stolen cars. The ending also implies that nearly everyone leaves their lives of crime behind them.

Diminishing these positive redeeming aspects is the fact that Memphis gets away with lots of reckless driving endangering people’s lives, although no innocent people or policemen are killed. GONE IN 60 SECONDS also contains plenty of foul language, including strong profanities. In addition, there is one scene where Memphis and Sway watch through a large window as another couple begins to undress one another. Although the movie is rated PG-13, this scene leans toward the R-rating side. Viewers therefore need to be extra cautious because of this material.