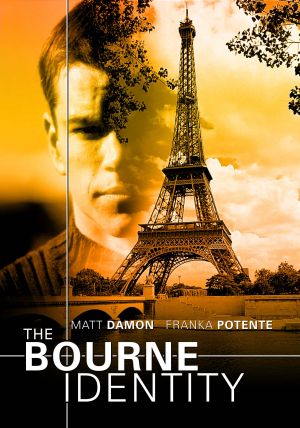 THE BOURNE IDENTITY is ultra-violent eye candy for the mass audience. It contains very little bloodshed, however, despite all the violence. Matt Damon plays Jason Bourne, a man trained by the CIA to be a killing machine. When Bourne gets amnesia from an assignment, CIA officials decide that he’s gotten out of control, so they try to kill him.

THE BOURNE IDENTITY is a slick looking movie. The direction and camera work are notable. The fight scenes are thrilling. But, the story is very obscure, which may be the point. America and the CIA have run amock, and Jason Bourne’s last conclusion is to quit the CIA and say he’s his own man. This is nihilistic in the extreme. Despite the lack of blood, teenagers who feel alienated or who like to play violent video games may like this movie. It’s not a good idea, however, to expose teenagers, or any child for that matter, to THE BOURNE IDENTITY. This movie also will not appeal to discerning adults with any sensibility. Finally, although there is a nice semi-chaste love story in the movie, it doesn’t seem to be well integrated into the plot.

(H, Ro, LLL, VV, S, N, A, D, MM) Nihilistic, conspiracy theory, humanist worldview with Romantic elements; 18 profanities, 18 obscenities and vomiting; intense violence but much of it bloodless involving CIA trained killing machines, that is, men who know how to maim and mutilate using everything from fountain pens to penknives, plus some horrific prolonged fight scenes, hero pounds man’s head through iron bars of stairwell until he finally kicks man down stairwell four or five stories up and falls down on top of man to cushion his fall, slow shotgun death, man uses scalpel to remove bullets, explosions, car chases, children put in jeopardy, and classic escapes; kissing and implied fornication; upper male nudity in removing bullets and brief upper male nudity in changing clothes; alcohol use; smoking; and, deception, stealing, government conspiracy, and government harassment.

THE BOURNE IDENTITY is ultra-violent eye candy for the mass audience. It contains very little blood, however, despite all the violence.

BOURNE opens with a fishing boat in the Mediterranean 60 miles off Marseilles in a storm. A French fisherman sees a body floating in the storm. He hauls it on board, and the body turns out to be alive, but the man has amnesia. The fisherman cuts away the wetsuit with a scalpel. The man has two bullets in his back, and the implant of a secret account number in Switzerland.

The man, played by Matt Damon, is given a few francs when they land in Marseilles to go to Switzerland to find the safe deposit box. In the box, he finds many different passports with his picture, each one bearing a different name. He also finds a gun and lots of money from different countries.

As he leaves the bank, the police start to come after him. Incredibly, he beats them to a pulp with nary a sweat. To escape the squad cars, he goes into the American Embassy. Again, he fights off innumerable soldiers with hardly any effort, causing immense death toll and pain. Although he has amnesia, he hasn’t forgotten how to kill and mutilate. At this point, one may wonder why all these people are after this man, something the movie never really answers.

Cut to CIA headquarters in the United States. Several operatives are talking about the loss of Jason Bourne, when they get word that Bourne made an appearance in Zurich at his safe deposit box. They decide, in reasons that are unclear, that Bourne needs to be liquidated. Bourne meanwhile offers $10,000 to a hippie German girl named Maria to take him to Paris to the address on one of the passports. By the time they get to Paris, the CIA has identified both her and him. An incredible chase takes place. Bourne outmaneuvers, out drives, out fights, and out kills all of his attackers. This goes on until the end of the movie when he quits the CIA.

THE BOURNE IDENTITY is a slick looking movie. The direction and camera work are notable. The fight scenes are thrilling. But, the story is very obscure, which may be the point. The United States of America evidently has run amock. The CIA, as we find out in Congressional hearings, is having fun doing covert operations under different code names that have no rhyme or reason. They are training $30 million killers who sometimes get out of control. They feel that Bourne is out of control, so they try to kill him. When they can’t kill him, they kill his superior and move on to another game. Thus, America is an empire which seems to have more influence in Switzerland, Spain and France than the governments or police forces of those countries. It’s not clear that this is going to be a well-received message post 9/11. Certainly, some reviewers will see this as an accurate portrait of the evil American empire throwing its weight around.

Bourne is a completely nihilistic individual. He has no idea who he’s fighting or why. His last conclusion is to quit the CIA and say he’s his own man. This is nihilistic in the extreme.

The screening audience cheered at the fight sequences and the chase sequences in THE BOURNE IDENTITY. Teenagers who feel alienated or who love violent video games may like this movie. It’s hard to see, however, that this movie will appeal to anyone with any sensibility. There is a nice semi-chaste love story, which ends with a kissy-feely “we survived” moment on Majorca, but the love story doesn’t seem to be well integrated into the plot. The reason this movie is not being given an excessive rating is because there is very little blood in all the stylized violence.