"In Unity We Prevail" 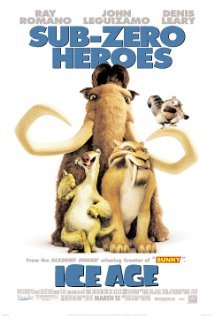 ICE AGE is the story of a sloth and a mammoth who journey together to escape the oncoming ice age. They rescue a human baby, whose mother has been terrorized by a pack of saber-toothed tigers because the humans had used the tiger coats to make their tents. One tiger, Diego, tries unsuccessfully to wrest the baby out of the mammoth’s trunk. The cat cannot go back to his pack without the child, so he is forced to stay with the sloth and mammoth until he steals the baby. He lies, saying that he knows where the baby’s father is. In the end, the tiger must decide how he really feels about stealing the baby. Has his heart softened during the journey, or will his killer instincts win out in the end?

ICE AGE is fun. The animation is fantastic, and the various voice talents add humor for adults. The movie has several politically correct, environmentalist elements, however, countered by a strong endorsement of marriage, a life laid down for another and a strong portrayal of the necessity of unity before victory. The slapstick violence and scary images require a caution for small children

(PC, E, Ev, B, C, Ho, V, N, M) Politically correct worldview stressing the environment (global warming) and anti-hunting sentiments (“I don’t like animals that kill for pleasure”) and evolutionary portrayals (people had some sharp caveman-type features and no apparent advanced language skills); some moral, redemptive elements with mammoth preaching loyalty within marriage and another creature laying down life sacrificially, although disparaging humor was had at the expense of some birds who warned, “The end is near” and chanted, “Doom on you,” (a subtle but probable jab at religious prophets); very subtle nod to homosexuality, though it will go over children’s heads (for example, two male rhinos are traveling alone through wilderness and one saves last dandelion for the other to eat and when sloth takes it, charges him because “He ruined our salad” and the two find a mud jaccuzi, etc.); no foul language except for one “shut up” and some scatological humor; typical slapstick cartoon violence with characters getting heads tromped, electrocuted (but still living, of course), hitting, tackling, falling, getting crushed, burned, etc., some scary elements seen in tour of ancient frozen pass featuring open-fanged dinosaur-type creatures and ancient sea creatures and volcanic eruptions, avalanches and walls close in on creatures and human mother jumps over cliff and dies by drowning after saving her baby (but drowning implied, not shown); no sex; nude baby; no alcohol; no smoking; and, lying and stealing.

ICE AGE is the story of a sloth (Sid) and a mammoth (Manfred) that make an unlikely and initially resistant pair of traveling companions on a journey to escape the brutality of the oncoming ice age. They rescue a human baby, whose mother, they soon find out, has been terrorized by a pack of saber-toothed tigers because the humans had killed cats and used their coats to make their tents. The baby’s mother had jumped over a cliff to escape the vengeful pack, and she held the baby safely at a rock until she saw that the mammoth and sloth would rescue and care for him; then apparently she slipped back into the water.

The sloth is willing, but weak and lazy; the mammoth is strong and powerful, yet he seems to be holding a hurt from the past that makes him resistant to helping anyone. Soon, however, Manfred realizes that his companion will need some help with the baby, so he reluctantly complies. As they travel, the sloth talks about his marriage failure and his unwillingness to settle down with one female. Manfred replies, “If you find a mate, you should be loyal – or at least grateful.”

Meanwhile, the tigers are still tracking the baby, and one of them, Diego, tries to wrest the baby out of the mammoth’s trunk. The mammoth proves his strength and new willingness to defend the child as he charges the cat and sends him flying. The cat cannot go back to his pack without the child, however, so he is forced to stay with the sloth and mammoth until he can find a way to steal the baby. He lies and says that he knows where the baby’s father and friends are, and he will lead them to the humans, just beyond the great pass.

The party of four encounters a pack of dodo birds that have managed to hoard three watermelons for the end of the world. They have signs and slogans that say, “Beware of the ice age,” and they squawk, “Doom on you!” After stealing one of the watermelons for the baby, they continue their trip, having become quite smitten with the entertaining child.

Soon, however, the other saber-toothed tigers show up, demanding to know why Diego hasn’t stolen the baby yet. Diego says that he will soon be bringing them the baby AND a delicious mammoth. The journey continues with a lot of fun and scary sliding and sledding through curvy and dangerous icy mountain passes, and through caves, where the group finds pictures detailing the story of how men had once come to the area and killed a mammoth’s wife and child. Manfred mourns, and the others cry. Despite his grief, however, the mammoth is unable to exact revenge on an innocent child, so he continues his protection of the baby. He also must do some daring heroics to save one of his companions.

Finally, Diego must decide how he really feels about stealing the baby and handing him over to the pack. Has his heart softened during the journey, or will his killer instincts win out in the end?

ICE AGE is a fun way to spend some time. The animation is fantastic, and the voice talents (especially Dennis Leary’s) really add humor for the adults. There’s one hilarious scene where the tiger is trying to play peek-a-boo with the baby, but it is so scary that the baby just cries. The movie is made for children, but it is appropriate only for children over five, in that there are plenty of scary elements such as frozen fanged creatures, volcanic eruptions, avalanches, and slapstick violence that could disturb young minds not yet cognitively able to critically evaluate such portrayals.

Hollywood did have to add its politically correct, ever-so-light-and-subtle elements of environmentalism, anti-hunting, evolution, possible homosexual inferences, and jabs at fear-based, “end of the world” religious zealots. To counter this, however, there was a very strong endorsement of marriage, a life laid down in sacrifice for another and a strong portrayal of the necessity of unity before victory.

Overall, this is a fine movie for most children and all adults. As with all movies, however, remember to discuss all questionable elements with your children, and go light on the heavy action or scary movies, albeit cartoons, that might induce nightmares in the very young.