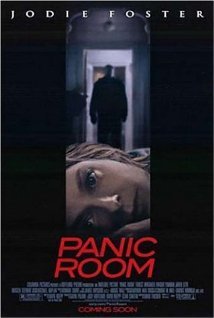 In PANIC ROOM, Meg Altman (played by Jodie Foster) and her emotionally-distant daughter, Sarah (played by newcomer Kristen Stewart), move into a spacious New York home with a mysterious closet-shelter called a panic room. Considered “the best place to be in the worst case scenario,” it contains video monitors to view all the rooms in the house, emergency supplies and, best of all, an impenetrable steel door which opens and closes quickly. As a storm rages during their first night’s stay, three burglars break into the new home believing it to be empty. Meg and Sarah manage to get to the panic room while the burglars work frantically to get to the treasure hidden inside. Mother and daughter are forced to play a dangerous cat-and-mousetrap game with deadly results.

PANIC ROOM is an intense and intelligent thriller with many clever twists and surprises. Director David Fincher successfully ratchets up the tension to staggering levels. Sadly, however, PANIC ROOM is a seductive steel trap intent on flooding the audience's mind with foul language and powerful violent images. Thus, despite moral, redemptive elements of bravery, courage and sacrifice, there is no real sanctuary inside this PANIC ROOM.

(PaPa, BB, C, ACap, PaPa, LLL, VVV, A, D, M) Pagan worldview elements portray safety and security as something that man can create; some moral elements such as courage, bravery, sacrifice, and personal safety risked to save others; no praying throughout this traumatic experience, but four exclamations of “Oh my God!”; at least 96 obscenities (with 63 “F-words”), six profanities and child encourages mother to use “F-words” over intercom toward burglars; strong violence includes woman and child chased at gunpoint, shootings, two execution-style head shots, gas and fire used to try forcing victims out of Panic Room, propane tank explodes, man’s arm on fire and burns to his face shown, child held hostage and threatened repeatedly, child viciously punched once in face, man pistol-whipped, kicked and beaten, man shown bloodied with broken arm, child shown in diabetic convulsions, man’s hand slammed and stuck in steel door, dismembered finger briefly shown, man hit by sledgehammer, man falls down stairs, child stabs man in back with needles, and woman experiences claustrophobia; no sex scenes but allusions to a previous affair which led to divorce; cleavage scenes, woman shown in bathtub and woman in low-cut nightgown but no nudity; drinking of wine; smoking and drug use – both illegal and medicinal; and, woman lies to police to save daughter’s life, burglary, theft, one burglar argues with other criminals that no one is to get hurt; justice is shown, and terrific scene reveals ill-gotten gains are fleeting.

In PANIC ROOM, recently-divorced Meg Altman (Jodie Foster) and her emotionally-distant daughter, Sarah (Kristen Stewart), move into a spacious New York home with a mysterious closet-shelter called a panic room. Installed by a wealthy and paranoid former occupant, the panic room is considered “the best place to be in the worst case scenario.” It contains video monitors to view all the rooms in the house, emergency supplies, a separate ventilation system and phone line, and, best of all, an impenetrable steel door which opens and closes very quickly.

As a storm rages during their first night’s stay, three burglars break in to the new home believing it to be empty. One of them is a security expert and family man (Forest Whitaker), sort of a burglar with a conscience. The youngest is a greedy insider who coordinated the job (Jared Leto). The other turns out to be a dangerous psychopath who will not be crossed (Dwight Yoakam). They seek a fortune hidden by the previous owner and, after much arguing, decide to finish their job even though Meg and Sarah are found sleeping. The men are convinced that millions await them, and, therefore, the mother and daughter will have to be killed.

Meg wakes up to use the bathroom, however, and catches a glimpse of the men on one of her security monitors. As the men are seen walking up the stairs, Meg frantically races to wake her daughter and make their way to the safety of the panic room. A heartpounding chase scene ensues, and the story’s tension continues to constrict right up until the end of the movie.

Meg and Sarah quickly learn that the burglars are after something inside the panic room and find the new outside phone line has not yet been activated. Refusing to leave, the burglars begin securing the home’s exits so that they will have time and privacy to eventually break into the stronghold. To save her daughter’s life, Meg must make several attempts to slip out of the shelter while the burglars argue and work in other parts of the house. Meanwhile, her daughter faces other terrifying threats in the form of convulsions and a possible diabetic coma.

PANIC ROOM is an intense and intelligent thriller with many clever twists and surprises. It is frightfully scary and filled with violence and rough language. The story feels stretched so tight that the plot always seems just about to break, but the steel frame of the superb cast and director (David Fincher of the successful nail-biter, THE GAME) holds it together while the tension is ratcheted up to staggering levels. The story’s very believable characters keep the audience locked in their seats, until they feel as trapped as Meg and Sarah are.

David Ficher’s direction is, at times, both excellent and annoying. Camera pans and impossible movements seem to be the latest rage in the new age of computer graphics. Still, he manages to show realistic situations and characters while making tremendous use of one old house. Regrettably, the story ends abruptly and a little awkwardly. To be fair, it may be difficult to avoid an anti-climactic ending after nearly two hours of emotion-filled tension on the screen.

Meg and Sarah, initially distant, angry and self-absorbed, are brought closer through this experience and their relationship is restored. The ex-husband, while clearly self-centered for abandoning them, shows a willingness to sacrifice his life for their safety. Justice is portrayed in a very positive light and the characters wrestle with doing good instead of evil. Best of all, New York’s police force is shown in a very positive light.

Regrettably, many moral and redemptive elements of bravery, courage and sacrifice do not seem to outweigh the rough R-rated language laced throughout the movie. PANIC ROOM is a seductive steel trap intent on flooding the audience’s mind with foul language and powerful violent images. Thus, there is no real safety or sanctuary inside this PANIC ROOM.