"A Cry for Significance" 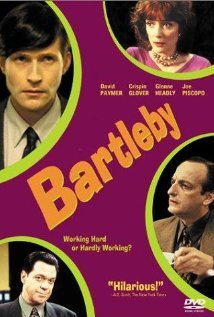 BARTLEBY begins with the title character (played by Crispin Glover) trudging along a freeway. Meanwhile, in a dreary office, a city records manager and his eclectic staff are composing an ad for a new position. Enter Bartleby, who is odd from the beginning, but then, so are his co-workers. No one in the office can understand why the usually diligent and compliant Bartleby, when asked one day to perform a simple task, replies, “I’d prefer not to.” This leads to a crisis that shakes the office and its workers.

Crispin Glover gives Bartleby incredible depth. Like the short novel on which it's based, by Herman Melville, the writer of MOBY DICK, BARTLEBY deals with the alienation and tedium of industrialization and society’s low tolerance for misfits. The movie's quirky, comedic edge works well, though the filmmakers have thrown in some sexual innuendo to appease modern audiences. What Bartleby has been searching for is meaning and purpose, and the dignity and individuality that God gives us, things that the world too often does not value or tolerate. BARTLEBY probably would be a great movie to watch as a discussion starter for believers or seekers.

(HH, Pa, B, Re, L, S, N, A, D, M). Humanistic world view of man as a machine, working and producing with little purpose; two characters ruled by sensuality and lust; one character shows growing compassion and unsolicited kindness throughout movie, fighting feelings of anger and resentment; 6 light obscenities; no violence; scene of intended sex between man and young girl he picked up at a bar, heavy innuendo and double entendre by two characters, reference to someone’s daughter moving in with her boyfriend, light sexual fantasies described (including a woman on a red carpet surrounded by flaming torches), many for comedic effect, one dream with young nude girl lying on a desk – but no breasts or private areas exposed at all; one character drinks scotch; smoking; and, characters tease and threaten passive man who is unable to express himself, an irrational homeless man made fun of and a needy man is abandoned.

“Nothing so aggravates a person as a passive resistance.” So wrote Herman Melville, author of MOBY DICK and the novella BARTLEBY THE SCRIVENER, the inspiration for BARTLEBY, a new independent movie by Jonathan Parker. BARTLEBY is extremely faithful to Melville’s work and examines what would drive a man to quiet and absolute desperation, shaking the ordered worlds of those around him.

BARTLEBY begins with the title character (played by Crispin Glover) trudging along a freeway, looking down on the passing cars from the chain link cage of a big city overpass. Meanwhile, in a dreary office, a city records manager (David Paymer) and his eclectic staff are composing an ad for a new position. It is dull work they do, and the ad begins by ironically calling for a “risk-taker and self-starter for an exciting and rapidly expanding records office,” then, more realistically and honestly solicits someone willing to work in a dreary, tedious job. Enter Bartleby.

Bartleby is odd from the beginning, but then, so are his co-workers. Rocky (Joe Piscapo) is a hormonally driven brute, Vivian (Glenne Headley) is a sensual, double-entendre-laden secretary, and Ernie (Maury Chaykin) is an emotional and simple-minded throwback to the 60s. David Paymer, the driven records manager, is the most interesting character, and the only one who changes and grows. Bartleby is the enigma in Melville’s novella.

No one in the city records office can understand why one day the usually diligent and compliant Bartleby, when asked to perform a simple task, replies, “I’d prefer not to.” This leads to a crisis that shakes the office and its workers. Not just because Bartleby won’t, but because he offers no explanation. Each worker responds in his own way, like a microcosm of society, but no one can understand poor Bartleby.

Crispin Glover gives his character, who really only has a few lines, incredible depth and dimension. Desperation and agony are in his eyes, in his body language and in the lines he delivers with raw emotion in a few potent words. Bartleby’s boss, David Payne, also delivers a strong performance as a man who is first irritated and infuriated by Bartleby, but becomes sympathetic and even empowered by him in the end.

Melville’s book deals with the alienation and tedium of industrialization and the effect of repetitious and boring work on individuals, as well as the issue of passive resistance (as did Melville’s short story “Billy Budd”). It also examines society’s low toleration for social deviance, or someone who doesn’t fit the mold. BARTLEBY hits these issues with a comedic edge that works well and does not detract from the seriousness of the story, or the pathos of its characters. Much of the sexual innuendo seems unnecessary to this tale, and more thrown in to appease the taste of modern audiences. Most of the story and its characters, however, are adapted very well, despite the modernization and some minor changes.

BARTLEBY is visually very interesting, shot in a quirky, 70s style, using period colors and fantasy office complexes that underscore the movie’s theme of isolation. It ends, as Melville’s novella does, desperately – with a cry of despair for humanity. What Bartleby has been seeking, what all of us seek, is meaning and purpose, and the dignity and individuality that God gives us, but that the world too often will not recognize value or tolerate. BARTLEBY probably would be a great movie to watch as a discussion starter for believers or seekers.