A SHOT AT GLORY 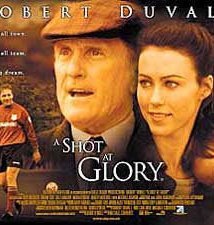 In A SHOT AT GLORY, Robert Duvall turns in another fabulous performance as a Scottish soccer coach in Scotland. Duvall plays Gordon McLeod, the head soccer coach of the professional team in a small town called Kilnockie. Gordon has suffered two major disappointments in life. First, his former partner, the current owner of the Glasgow Rangers, the Yankees of Scottish soccer, betrayed him, stealing the Rangers out from under Gordon. Then, his daughter, Kate, fell in love and married one of the Rangers’ star players, Jackie McQuillan, played by real-life soccer player Ally McCoist in another wonderful performance. Now, several years later, Jackie and Kate have separated, despite their little boy. To top things off, the brash American owner of Gordon’s team, played brilliantly by Michael Keaton, has hired Jackie to play for them.

Late in his career, Robert Duvall, one of America’s greatest actors of the last two centuries, has decided to star in small, independent movies that allow him to have a strong measure of control, as well as show off his acting chops. The last such movie that his own production company, Butcher Run Films, made, THE APOSTLE, turned out to be one of the most surprising, most Christian movies of the last decade, and of all time. In that movie, Duvall also managed to give one of the best cinematic performances ever, while directing the movie himself!

In A SHOT AT GLORY, the new movie produced by Butcher Run, Duvall relinquishes the directing reins to Michael Corrente (OUTSIDE PROVIDENCE), but turns in another fabulous performance, this time as a Scottish soccer coach in Scotland. A SHOT OF GLORY also has a solid Christian worldview, despite some very strong foul language. The movie’s Christian worldview is not as strong as THE APOSTLE, especially THE APOSTLE’s last half, but it’s there nevertheless. In fact, the movie opens with a funeral (apparently Roman Catholic) where Jesus Christ is explicitly declared Lord and Savior.

In A SHOT OF GLORY, Duvall plays Gordon McLeod, the head soccer coach of the professional team in a small town called Kilnockie. Gordon has suffered two major disappointments in life. First, his former partner, the current owner of the Glasgow Rangers, the Yankees of Scottish soccer, betrayed him, stealing the Rangers out from under Gordon. Then, his daughter, Kate (played by Kirsty Mitchell in an excellent performance), fell in love and married one of the Rangers’ star players, Jackie McQuillan, played by real-life soccer player Ally McCoist in an even more wonderful performance.

Now, several years later, Jackie and Kate have separated, despite their little boy, Jackie Junior. To top things off, the brash American owner of the Kilnockies, played by Michael Keaton in another superb performance, has hired Jackie Senior to play for them, even though Jackie’s wild ways have led to separation not only from his wife but also from Scotland’s best team, the Rangers.

Needless to say, Gordon is not happy about this situation. In fact, he hasn’t spoken to his daughter since she tied the knot with Jackie. This upsets Gordon’s wife, who desperately wants Gordon to patch things up with his daughter. Meanwhile, although he seems to still be having problems with his wild ways, Jackie has decided to make an effort to reunite with Kate. The rest of the movie answers the following three questions: Can Jackie stay the course and really patch his marriage back together? Can Kate and her mother convince Gordon to acknowledge his only child, Kate? And, can Jackie and Gordon bury the hatchet and hold the team together as they make a run for Scotland’s Championship Cup?

The family relationships in this little gem of a movie are set against rousing training scenes and exciting soccer matches as the Kilnockies make their way to the Championship. Of course, eventually the team must face Gordon’s nemesis, the Rangers and their backstabbing owner, but compensating for this predictable ending is one of the most exciting fictional sporting matches ever portrayed in the movies. Instead of the boring wide-angle shots that you usually see on slow-moving televised soccer matches, director Michael Corrente shoots the match in fast and furious medium shots, interspersed with some appropriate close-ups.

As suggested before, most of the cast in A SHOT OF GLORY does a bang-up job. The performances of Duvall as Gordon and Ally McCoist as Jackie, however, deserve the most recognition.

Duvall gives another one of his superb performances. The best scenes of him are those where he leads his team in training and leads his team to glory on the soccer field, as well as when he matches wits with the owner of the Rangers and the owner of the Kilnockies, who wants to move the team to a bigger stadium in a bigger city. As for Ally McCoist, he gives an extremely natural performance that brings out the psychological subtleties of his character. McCoist expertly shows the reasons why Jackie has become such a thorn in other people’s sides and why other people found Jackie so appealing in the first place. His performance reminds one of Richard Harris’ groundbreaking performance in Lindsay Anderson’s 1963 sport drama about rugby, THIS SPORTING LIFE.

A SHOT AT GLORY opens with a funeral (apparently Roman Catholic) where the minister declares Jesus Christ to be Lord and Savior. Other Christian references appear to give the movie a solid Christian worldview. Furthermore, the moral and psychological conflicts within the story are all resolved in an implicitly Christian manner.

Regrettably, however, there are many uses of the “f” word in the movie. Also, there is a scene early in the movie where Jackie has a one-night fling with a soccer groupie. This scene sets up the dramatic tension regarding the ultimate resolution of Jackie’s apparent attempt to reconcile with his wife, Kate, but the brief sex scene showing Jackie’s capacity for sin is more explicit than it needed to be and helps give this movie an R-rating. Thus, contrary to what the Los Angeles Times misreported in its own review, A SHOT AT GLORY is not “suitable family fare.” MOVIEGUIDE® must, in fact, give an extreme caution to A SHOT AT GLORY. Adults who may want to see it should be made aware of its offensive content.