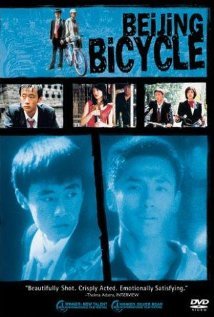 BEIJING BICYCLE stars Cui Lin and Li Bin as two teenage boys, one from the country and one from the city, in Beijing, China. The two teens face personal crises and each other as they each struggle to maintain ownership of their mutual instrument of survival – a bicycle. The story displays the country boy’s perseverance in spite of a never-ending series of losses, humiliation and physical persecution.

BEIJING BICYCLE is a beautifully filmed and brilliantly crafted snapshot of teenage culture in a modern-day China urban setting. BEIJING BICYCLE tackles the impact capitalism is having on the traditional values of communist China through an iridescent story of teenage love, big-city struggle, peer pressure, and revenge. The movie’s humanist worldview explores capitalism’s negative impacts on class consciousness and consumerism in China. BEIJING BICYCLE’S direction captures the heartbeat of the city and country in the midst of social change and the cinematography is at times stark and other times lush, but always stirring. However, the movie’s teenage actors are the real stars in this movie. There are a few instances where the story could have moved quicker. It also contains several shocking scenes of brutal violence

(H, B, Acap, PC, L, VVV, S, N, D, MM) Humanist worldview with minor moral elements exemplified through the protagonist’s perseverance and unimaginable determination in spite of a never-ending series of losses, humiliation and violent physical persecution; capitalistic worldviews portrayed mostly negatively by the dual impacts of consumerism and class consciousness on teenagers in modern-day China; several minor obscenities; strong violence with a number of shocking, brutal physical beatings carried out by gangs of teenage boys and, in one instance, a father toward his son; several occurrences of minor teenage lust and one instance of voyeurism, although no nudity is actually shown in the scene; natural nudity innocently by showing a boy’s backside in a spa shower scene; no drinking; smoking; and, stealing, revenge, teenage rebellion, deceit, and disrespect toward parental authority.

BEIJING BICYCLE is a beautifully filmed and brilliantly crafted snapshot of teenage culture in a modern-day China urban setting. This winner of the 2001 Berlin International Film Festival’s Silver Bear Award brings to mind other classic youth culture conflict films like WEST SIDE STORY and REBEL WITHOUT A CAUSE, while its theme of perseverance despite loss told in a story surrounding the theft of a bicycle is also a tip of the hat to the Italian film classic, THE BICYCLE THIEF.

BEIJING BICYCLE tackles the impact capitalism is having on the traditional values of Communist China through an iridescent story of teenage love, big-city struggle, peer pressure, and revenge. BEIJING BICYCLE’s direction vividly captures the heartbeat of the alleys and boulevards of a city and country in the midst of social change and the cinematography is at times stark and other times lush, but always stirring. However, the movie’s teenage actors are the real stars in this film. Cui Lin (Guei) and Li Bin (Jian) shared the New Talent Award at the Berlin Film Festival and Zhou Xun (Qin) is known as one of China’s best young actresses.

The bicycle in the film is symbolic of the changes in contemporary China. It was once the only method of transportation and, as shown in the film, is still more commonplace than the automobile in Beijing. It represents the transition of social norms in this country and, in the case of the two central characters, it becomes two distinct instruments of survival.

Guei (Cui Lin) is a teenage boy who has left his home in the country to make a better life for himself in the urban sprawl of the country’s capital. He quickly lands a prestigious job at a courier service and is granted the use of an upscale mountain bike to make his deliveries throughout Beijing. Guei experiences ups and downs, alternatively humorous and frustrating, performing his delivery job in the fast-paced city world during which a majority of his first months earnings are applied to the price of the bike – his most valuable possession and direct source of income.

Jian (Li Bin) is a city teenager who longs for a bicycle in order to impress his girlfriend, Qin (Zhou Xun), and to be accepted among his private school peers. His father’s promises to buy the boy a bicycle have been regularly broken, and Jian is obsessed with claiming what he thinks is rightfully his.

Guei’s prize bike is stolen just days before complete ownership is transferred to him. Guei is devastated and loses his job, not for his failure to timely deliver a package, but because of his boss’s humiliation. Guei is determined to find his bicycle in the streets of the Beijing – a veritable needle in a haystack considering the city’s sea of bicycles.

Through a turn of events, Jian winds up with Guei’s bike and finally experiences the acceptance he so desperately desired from Qin and Jian’s bike-stunting gang of friends. Jian’s face is illuminated by his triumph as he pedals rapturously along a river-lined road with his black hair and red tie floating in the breeze as the sunlight and shadows tap dance across the tree tops.

Jian’s day in the sun quickly ends as the bike is soon recovered by Guei, and then it is captured and recaptured between the two teens in a series of exciting cat and mouse chase scenes where both boys end up suffering emotional and social status loss as well as physical consequences – Guei, through violent beatings from Jian’s hoodlum friends, and Jian, at the hands of Jian’s father.

Guei and Jian’s dreams of a better life via the bicycle are dimmed. Jian’s material lust and insecurity prods him toward stealing money from his father and results in a daily diet of deception. His inability to see his own identity through his Creator’s eyes as opposed to an identity rooted in social acceptance and possessions leads him stumbling down a steep, dark stairwell of one poor decision followed by another. Eventually, he begins to glimpse the fleeting social value of the bicycle through his loss, but due to his cultural inability to accept humiliation along with the weight of his poor decision-making, he initiates a personal revenge that reaps disaster.

On the other hand, Guei is simply a victim of circumstance and of being at the wrong place at the wrong time. Guei is a “modern-day Job” whose losses and setbacks are unexplainable and unfair, but, against all odds, he chooses not to let his circumstances shatter his dream or destroy the new life he has chosen.

The violence in certain scenes is graphic and disturbing. The overall screen time of violence is fairly minimal and there are no guns, knives or death. In modern filmmaking, violent content can become as unnoticeable as a weak music soundtrack, but for some reason, the violence in BEIJING BICYCLE is almost unbearable to watch. Perhaps it is due to the movie’s strong character development that produces sympathy toward the characters, or the fact that the violence is inflicted upon teenagers, or maybe viewing hand-to-hand violence strikes a different chord from the familiar and desensitized viewing of gunshot wounds. The violence is not a creative flaw, nor should it have been minimized, but the interested filmgoer should be forewarned.

The only real creative flaw in this film flows from one of the director’s greatest strengths. One of Director Wang Xiaoshuai’s strengths in the movie occurs when his camera patiently lingers on a quiet actor thereby colorizing the breath of a character’s deep emotions that most directors miss, but there are a few instances where the story could have moved a little quicker and some shots and scenes that were a little too long.

BEIJING BICYCLE firmly grips the clanging passion and silent subtleties birthed from the angst, rebellion and romance of teenagers seeking to forge their personal identities and places in an evolving society. The script solidly supports some remarkable teenage performances and when compared with the trite, audience-demeaning teen flicks of Hollywood, BEIJING BICYCLE is honest realism and a whirling, albeit tragic, “hands-free” ride.