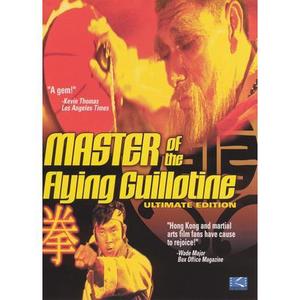 The martial arts cult classic, MASTER OF THE FLYING GUILLOTINE, hits theatres in a newly restored Ultimate Edition, drawing from rare negatives with re-mastered audio, English subtitles, and 10 extra minutes not seen the original 1975 American release. Director/writer/star Jimmy Wang Yu presents this unique masterpiece of fight choreography and sounds effects that would usher in the new standard for future movies and video games in the genre. Wang Yu, who is considered by many Asian cinema scholars to be more of an influential force in martial arts cinema than Bruce Lee, stars as the One Armed Boxer, the hero who must fight for his life from the revenge-minded Flying Guillotine Master, played by Kam Kang.

From the center of all the fantastic fights and spectacular sights, a solid humanist worldview emanates, where skill and cunning ultimately overcome evil. Spiritual beliefs are of Eastern descent, being represented by the various styles of martial arts. The hero is a moral man with redemptive traits, however. Viewers probably will be entertained by the expertly choreographed fight scenes throughout the MASTER OF THE FLYING GUILLOTINE, but the movie’s worldview elements and violence are a mixed bag

(HH, PaPa, O, C, B, L, VVV, N, A, M) Humanist worldview with Eastern religion, occult elements such as the Indian fighter who can lengthen his arms to three times their length by a force of the will, redemptive and moral elements such as the character of the protagonist, who offers moral wisdom and cares about others before himself; five light obscenities; lots of martial arts violence which includes (but not limited to) punching, kicking and weapons use, bloody bodies shown after being beat up, a few decapitations via the Flying Guillotine, stabbing, one impaling, man chokes with braided hair, eyes ripped out, broken limbs, bloody hands, blistered feet as a result of burning, and man hit with flying axes; no sex; upper male nudity and brief rear male nudity (from a distance) in retreat from fight; gluttonous, drunk man tries to leave without paying (gets decapitated); and, Flying Guillotine master bent on revenge.

The martial arts cult classic, MASTER OF THE FLYING GUILLOTINE, hits theatres in a newly restored Ultimate Edition, drawing from rare negatives with re-mastered audio, English subtitles, and 10 extra minutes not seen in the original 1975 American release. Director/writer/star Jimmy Wang Yu presents this unique masterpiece of fight choreography and sounds effects that would usher in a new standard for future movies and video games in the genre.

Opening up to a shot of a lonely mountain landscape, the camera pans to a shot of Fung Sheng Wu Chi, the Master of the Flying Guillotine, who vows revenge on the Han revolutionary, the One Armed boxer (Jimmy Wang Yu), who has killed his two disciples.

Wang Yu, who is considered by many Asian cinema scholars to be more of an influential force in martial arts cinema than Bruce Lee, runs a martial arts school, unaware of the superhuman master that now lives to kill him. Hearing of an upcoming martial arts tournament put on by President Eagle Fist (Lung Kun Yee), he agrees to watch the event with his students, but forbids them to participate in it, to avoid drawing attention to the Han movement. The fighters register the day before, which include an Indian Yoga Master (Lau Ka Wing), Win Without a Knife Yakuma (played by Wang Lung Wei, who actually has a knife), and a Thai Fighter (Chi Fu Chiang). These and other characters enter into the cast of characters that will later affect the chain of events as they unravel, going from the spectacular fight choreography of the tournament to the final showdown between the One Armed Boxer and the Flying Guillotine master.

From the center of all the stunning fight scenes, both for their ingenuity and viciousness, and the first-generation sound effects, a solid humanist worldview emanates, where skill and cunning ultimately overcome evil. Spiritual beliefs are of Eastern descent, which makes sense considering the movie is set in the Ching Dynasty of China.

The fighters all bring to the table their own fighting styles that also carry with them a different set of beliefs. It should be noted that, in the traditional format of almost all martial arts, the moves and meditations of the artist were centered on the artist discipline, to the end of being in complete control of his/herself. Achieving a high level of mastery of the styles showed that the artist had achieved mastery over his/her body and, subsequently, over his mind, emotions, soul, and spirit. This mentality writes God out of the equation completely, relying on human achievement to give him or her control over themselves, and not the Lordship of Jesus Christ. Some styles, like the ones portrayed in this movie, draw from a power to do things that seem to be superhuman. While many of these feats can be achieved by a lot of human discipline, many also draw from the demonic realm, which augments the artist’s ability. Many of the religions from which the martial arts drew their base come from a pantheistic and polytheistic theology, where there is a dualistic nature about good and evil.

In the modern Western form of martial arts, many of the spiritual aspects from the East give way to the religious sensibilities of the particular artist. The moves and disciplines stay the same, but many more religions are brought into the equation since the martial arts have spread across the globe.

The moral character of the One Armed Boxer should be commended, for he shows selflessness in thinking about others before himself. He also gives wisdom (some biblical in content) to his students about using their skills, and how they need to grow.

Being moral is not enough though. The important thing to remember is man’s need for Jesus Christ to give them true discipline over themselves. Even in this, Christians should not be devoted to discipline, but disciplined to devotion to their Savior. When a person accepts Christ, they are given a new nature, as the old nature is cast off. He/she also now draws from the supernatural source of all goodness and now has the ability, through the grace and mercy of God, to be truly good and moral. This accepting of Christ as Lord also moves beyond self and begins a loving relationship with Creator and creation.

MASTER OF THE FLYING GUILLOTINE: ULTIMATE EDITION offers fantastic fights, spectacular sights, and a chance to be energetically entertained. Viewers should also take a chance to look at the movie from a worldview bent; the movie unintentionally offers some good insight into some of the belief systems behind the martial arts.