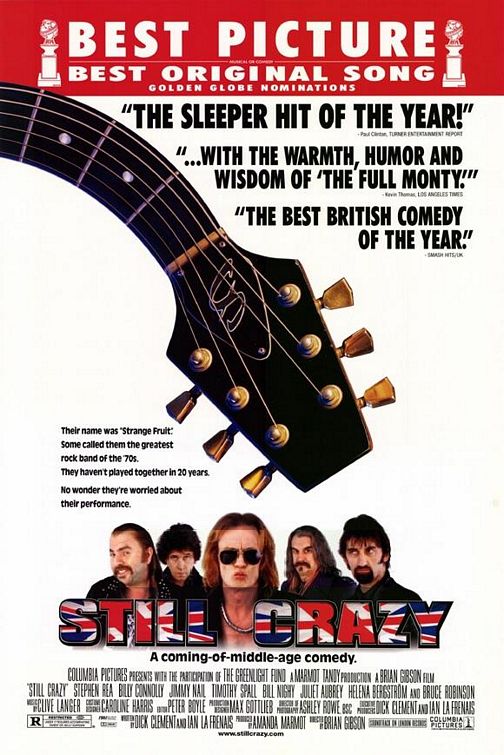 Some foul language, sexual immorality and drug references mar this otherwise charming story of a 70's rock and roll band trying to stage a comeback on a tour in Holland. STILL CRAZY is not a broad audience, worthwhile movie, but the story and performances are both amusing and heartbreaking.

STILL CRAZY is a fictional movie but feels like a docudrama about a British rock band named “Strange Fruit” whose members decide to reunite after 20 years. While it brings to mind comparisons to such movies as THE COMMITMENTS, it also brings to mind Rob Reiner’s hilarious, though offensive farce about a heavy metal band, THIS IS SPINAL TAP.

The story starts with Stephen Rea’s character Tony Costello dropping by a posh restaurant on a service call for one of his condom concessions. A former fan who witnessed Strange Fruit’s stormy last performance in 1977 recognizes him. The fan is also a rock promoter who offers the band a comeback tour in Holland if Tony can round up all the members. Tony has little to lose and starts by looking up the band’s former assistant, Karen, played by Juliet Aubrey, for whom Tony once had a fancy.

As Tony finds each band member, the movie reveals their back-stories. This adds to the characterizations and helps make the subsequent journey more intriguing. First, there’s Les Wickes, played by Jimmy Nail, a singer-guitarist who is now a roofer and is still burning with resentment that he wasn’t given the lead position when the original lead died from a drug overdose. The person they did hire, Ray Simms (Bill Nighy), is the stereotypical aging hippie who lives out on his ranch with his beautiful but possessive second wife, Astrid (Helena Bergstrom). Ray has lost the power he had as a lead guitarist but hasn’t faced that fact – yet. The drummer of the band, Beano Baggot, played by Timothy Spall, is a nursery worker who thinks the woman chasing him is a tax collector. The heart of the band was Brian Lovell, the love of Karen’s life, but Tony and Karen find out he is dead. Finally, a roadie named Hughie, played by comedian Billy Connolly, joins the band and serves as the movie’s cynical narrator.

The group decides to accept the promoter’s offer because they’re all in need of money. So, they hire a young guitar whiz named Bruce to take Brian’s place, but, as they come to discover, no one can really take Brian’s place.

The central question to the movie is whether this group can really pull it off. They’re aging, rusty and nursing delusions. They also have a past that promises to pull them apart the way it did 20 years ago. Have they grown enough to reconcile those conflicts in a new way? Do they milk nostalgia or change their sound to appeal to a decidedly rougher, punk nineties sound?

Director Brian Gibson does a good job of shaping this story and bringing in performances that are both amusing and heartbreaking. He weaves the music of the fictional band imaginatively into the story, never stopping or upsetting the pace. Mick Jones of Foreigner and Chris Difford of Squeeze wrote the music and lyrics, respectively. The characters in this movie are richly defined and well-acted by the screenplay and the ensemble cast.

Despite its campy potential, STILL CRAZY offers a few fresh surprises along the way, though it is sometimes slow in getting there. The initial scenes on the tour are very funny, but the stakes aren’t high enough to sustain the 100-minute running time. A shorter length would have worked better, but the acting is superb and the music gets better as the movie progresses.

STILL CRAZY is not a broad audience, worthwhile movie, however. Regrettably, foul language, sex and drugs are not only part of the milieu of these characters but are also displayed on screen.