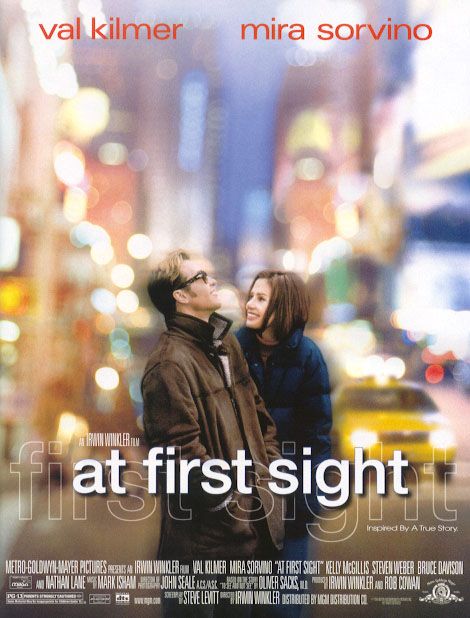 AT FIRST SIGHT is about a blind masseuse who regains his sight and the patient woman who stands by his side during the journey. Focusing on medicine as a metaphor for life enhancement, it contains good lessons, charms and earnestness, and comes across as a pleasant, but fluffy, and regrettably family-inappropriate. Containing some sexually charged scenes, including nudity and fornication, it also has moderate obscenity and profanity use.

It is hard not to pull out cliché’s about seeing and vision when describing AT FIRST SIGHT. Indeed, the very title begs statements like, “Seeing is believing,” “the eyes have it,” and “watch this” in describing its essence. Like PATCH ADAMS, it focuses on medicine as a metaphor for life enhancement. While the story carries its certain good lessons, charms and earnestness, it comes across as a pleasant, but fluffy, and regrettably family-inappropriate, Hollywood product.

Mira Sorvino plays a Manhattan architect Amy Benic who takes a weekend breather at a winter resort upstate. There, she receives a very sensual massage by blind masseuse Virgil Adamson, played by a languid Val Kilmer. It is only after the massage that Amy realizes that Virgil is blind. As he touches her, she senses he is really trying to get to know her. Hence, she falls in love (or lust?) with him and is sad to part ways with him when she must return to New York. Yet, Amy returns and tells Virgil that there are new treatments and surgeries that may help his condition. Naturally, he is skeptical, but eventually decides to go to New York with Amy to visit the East Coast’s leading eye surgeon.

Virgil agrees to the surgery, which removes cataracts from his eyes, and he is able to see images and colors for the first time. Yet, because his vocabulary of understanding the world has been through touch, he must touch everything as well as see it in order to transfer his understanding to visual terms. In fact, he doesn’t understand perspective or other things that seeing people take for granted. While this change is wonderful, both Virgil and Amy have difficulty with the transition. Also, Virgil’s sister, Jenny (Kelly McGillis), realizes that her main purpose for living, taking care of Virgil, is lost. Furthermore, Virgil confronts his father, who left Virgil when Virgil was a child, to demand some answers. While the joy of sight, and life, are celebrated, Virgil finally receives some unsettling news, which makes an ultimate demand on his relationship with Amy, and his way of seeing the world.

This tale of love, commitment and a minor miracle is flawed for families by a few sexually charged scenes. First, Virgil seems to enjoy his job as a masseuse a little too much when he first meets Amy. His rubbing and her satisfaction are rather drawn out. Secondly, when he regains his sight, he asks Amy to reveal all of herself, in other words strip. Finally, Nathan Lane, playing visual therapist Dr. Phil Webster, takes Virgil to a strip club, for a unique therapy to practice focusing. The movie also has moderate obscenity and profanity use.

While both Mira Sorvino and Val Kilmer perform serviceably and admirably, both are limited to a surface treatment of this story through the plastic script. While it is refreshing to see Kilmer outside of the action genre, and indeed this is some of his most likeable work in some time, he is almost too saintly and calm, translating into an emotionally static character. Dramatic effect could have really been enhanced with a wider range of emotion, which the movie seems to demand. Nathan Lane shines as the only unique supporting character.

AT FIRST SIGHT celebrates color, perspective, vision, and seeing things for the first time. Virgil is like a child and sees all with a child like wonder. Despite advice to stay away from dating a blind man, Amy dedicates herself to him, and practices patience, sacrificial love and concern. While she freezes emotionally at the revelation of a shocking blow, she eventually rallies to help Virgil at his most difficult time of need. The faith Bible verse is quoted too, demonstrating that Virgil has coping skills that many of us never need to, or fail to, operate. “Faith is the substance of things hoped for, the evidence of things not seen (Hebrews 11:1).”

Some movies fall short of greatness (four stars) to be simply good (three stars), but others work hard to be a little better than mediocre (two stars). This is such a movie and falls on the low end of three stars. Winsome but flawed, AT FIRST SIGHT wants to inspire, charm and induce good feelings and good will. It does to a large extent, but, in the final analysis, its vision falls short of its goal.

Writer: Steve Levitt BASED ON THE NOVEL: "To See, Not See" by Oliver Sacks, M.D.