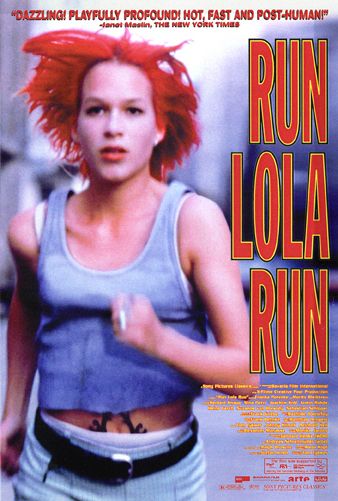 RUN LOLA RUN is a frenetic, nearly successful, sometimes funny, but always intriguing, German thriller about a punkish young woman with bright red hair, Lola, who must make three nominalistic time-travel attempts to get 100,000 marks in German money to her punkish boyfriend in 20 minutes, or else his gangster boss will kill him. The movie includes some positive moral elements and an answer to prayer, but its story is about a gangster and his girlfriend and includes strong foul language and other miscellaneous immorality.

Ending a movie with a close-up of a protagonist’s face has been a popular ending ever since the great French film director, Francois Truffaut, did it in his famous 1959 movie, THE 400 BLOWS. For instance, THE TAKING OF PELHAM ONE, TWO, THREE ends with a wonderful close-up of Walter Matthau’s face as Matthau’s character realizes he’s just identified the last remaining member of a gang of subway thieves. Steven Spielberg ends E.T. with a close-up of the little boy Elliott’s face as he watches his alien friend’s spaceship form a rainbow in the sky. This summer, there have been two romantic comedies which end with close-ups of a beautiful woman smiling, Julia Roberts in NOTTING HILL and Lena Headey in TWICE UPON A YESTERDAY. Amazingly, a new crime thriller from Germany, RUN LOLA RUN, is the third movie this summer to end with a close-up of a woman smiling.

RUN LOLA RUN is a frenetic, nearly successful, sometimes funny, but always intriguing, thriller about a punkish young woman with bright red hair, Lola, who must find a way to get 100,000 marks in German money to her punkish boyfriend, Manni, in 20 minutes. Manni needs the money because she was late picking him up on her bicycle after he had picked up 100,000 marks in a job for his gangster boss. Because she was late (her bicycle was stolen), Manni had to take the subway to the place where he is supposed to give the gangster the money. Two subway guards rousted Manni, however, and he accidentally left the money on the subway, where a bum now has it. Unless Lola can find some way to get Manni 100,000 marks in 20 minutes, Manni will rob a nearby grocery store for the money. Otherwise, his boss will kill him.

Lola runs to the bank where her father works, but her father is too busy having a conversation with his mistress about fathering a baby. He refuses to give Lola any money and tells her he’s not really her father anyway. Lola runs to Manni but Manni’s already holding a gun on the people in the store. She joins him in the heist but is accidentally shot in the chest by a policeman. Lying on the street, she imagines (or recalls) a conversation she had with Manni about why he loves her. Instead of dying willingly, she says in German, “Stop!” and the whole sequence of her run to save Manni’s life happens all over again, but with a few different, important twists. The second time also ends in tragedy, however, and Lola does her run a third time. The third time’s the charm, in more ways than one, and the movie ends with the aforementioned smile, a small ironic one, on Lola’s face.

RUN LOLA RUN was clearly very hard to film for several reasons. First, the director, Tom Tykwer, needs to have the outdoor lighting look the same throughout all three plot regurgitations. Also, Tykwer puts in many quick edits, fast motion, pumped up music, and even cartoons to jazz up his movie and give it some humor. Finally, the slight variations in each of the three sequences in RUN LOLA RUN are elaborately designed as sort of an ironic, developing counterpoint to the earlier parts of the movie.

The problem with RUN LOLA RUN, however, is not its dazzling frenzy, nor Franka Potente’s performance as Lola, nor even Moritz Bleibtreu’s pouty performance as Lola’s boyfriend Manni. The problem with the movie is Manni’s character. It’s hard to sympathize completely with a woman who would go to such lengths for this loser, even though it’s clear that Lola loves Manni.

Two scenes add to the sympathy factor, though. First, at one crucial point in the third sequence, Lola seems to ask God for help (she doesn’t specifically say God, but seems to be addressing a higher power as if she were talking to Him). Her prayer is answered miraculously, although the answer may be morally off-kilter because it involves winning at gambling. Immediately after the miracle, however, Lola hops aboard an ambulance she had encountered in the first two sequences and helps stabilize a dying man’s heartbeat by holding onto his hand.

These two scenes lend a moral and spiritual depth to the movie. They also provide a link to an important prologue at the beginning of the movie where a man is heard off-screen (during the movie’s unique opening credits) asking questions about the meaning of life, about man’s origins and about man’s future. Thus, the movie may be saying that the meaning of life and the future for mankind is seeking help from God and reaching out to help other people.

This is only an educated guess, however. The director should have developed these interesting ideas more fully instead of letting the audience try to make sense of the movie’s subtle ambiguities completely on their own. That, and the fact that the movie is about a gangster and his girlfriend and includes strong foul language, the nominalistic manipulation of time and space and other miscellaneous immorality, just barely earns RUN LOLA RUN a strong moral caution.