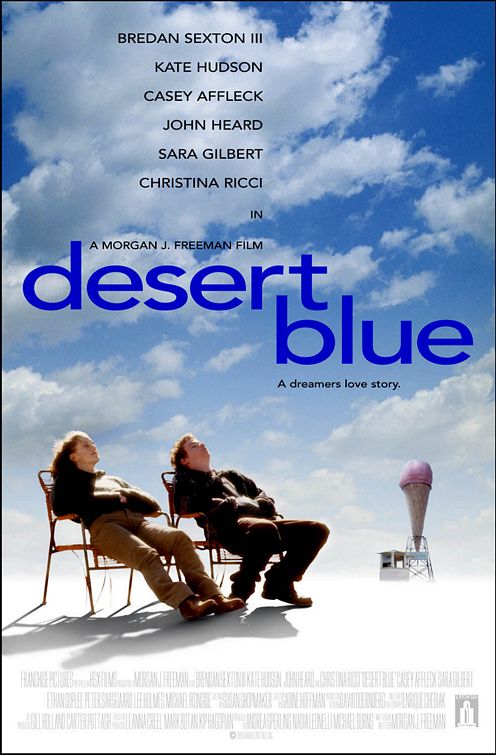 DESERT BLUE examines a group of small town teenagers living in the California desert and features pyromaniac, drunks and lewd talkers for protagonists. A truck carrying a secret ingredient to the local soda factory crashes, and a beautiful young television actress must be quarantined along with the town residents. Odd, laconic, only marginally amusing, containing foul language and a few problematic plot elements, this is a practice movie for its director.

Last year, MOVIEGUIDE reviewed a movie called DANCER, TEXAS. Never heard of it? This is not surprising. Of the urban theaters where it was projected, it came and left quietly. This is unfortunate because this PG rated movie largely displayed a moral worldview of small town teenagers at a crossroads in their lives. Now, DESERT BLUE covers the same territory in nearly the same area of America, the Western Desert, but this time features a pyromaniac, drunks or lewd talkers for protagonists.

DESERT BLUE is set in the offbeat fictional California town of Baxter, population 89. Baxter’s only traffic consists of tourists who stop to gawk at its giant landmark – the world’s largest replica of an ice cream cone. Running through the outskirts of town is a giant water pipe, which feeds Southern California with its water supply.

A teenager named Blue (Brendan Sexton III) hopes to use some of this water to finish Baxter Beach, a water park complete with water slides, boats and canoes. When not working, Blue hangs out with his rebellious teenage friends including Pete (Casey Affleck), who has his eye on defending his All Terrain Vehicle extreme racing championship, and Pete’s girlfriend Ely (Christina Ricci) who enjoys using explosives. Blue’s best buddy Cale (Ethan Suplee) dreams of becoming town deputy, while Sandy (Sara Gilbert) sells soft-serve ice cream cones from the roadside attraction.

One day, a truck carrying a secret ingredient to the local soda factory crashes, spilling its contents and resulting in the mysterious death of the truck’s driver. FBI quarantines the town, including beautiful young television actress, Sky (Kate Hudson), who is merely passing through town on the way to Los Angeles with her father. As time passes, the town teenagers become increasingly more restless. They distract themselves from the chemical scare by drinking beer through a “beer bong” and blowing up objects.

Despite Blue’s good nature, the urban, educated Sky falls for Blue, and Pete tries to break the FBI roadblock to attend an ATV race. A trigger-happy FBI agent shoots Pete in the shoulder, causing Ely to become enraged and blow up the FBI Winnebago. Eventually, the cause of death of the truck driver is revealed, and various members find the fulfillment of their dreams.

1997 Sundance Film Festival Audience Award winning writer/director Morgan J. Freeman may get a larger audience for DESERT BLUE than DANCER, TEXAS because he has more recognizable stars. Casey Affleck (brother of Ben), Kate Hudson (daughter of Goldie Hawn) and Christina Ricci are all well on their way to represent the next generation of actors in America. Affleck is the most amusing out of a rather dull cast, and Kate Hudson merely appears to be distancing herself from the goofy personae of her mother. Ricci, regrettably, seems forever doomed to be wearing dark mascara and playing the biggest rebel.

With little theme, DESERT BLOOM primarily states that through fate and a little explosives, you can achieve your dreams. Blue gets his water park after Ely takes some explosives to the water pipe. Cale becomes deputy, but for no particular achievement and in spite of the fine work of the previous deputy who mysteriously disappears without explanation. It is uncertain if Pete will race again, or if Sky will act again. Her unbelievable relationship with Blue suggests that she may not return to acting. Her loss of vanity stands out as one of the only moral lessons learned in this movie.

Though a minor part of the movie, Ricci gives a few brief monologues on how to make bombs. This stands out like a sore thumb and seems quite irresponsible today. Though she blows up objects because she is bored, and not angry at her parents, God or the system, her play-by-play destruction with gunpowder results in a very dangerous message.

Odd, laconic, only marginally amusing, and containing a few problematic plot elements, DESERT BLUE is a practice movie for its director, and a lesson in pyrotechnics for the vulnerable teen.